Melbourne's lord mayor Sally Capp has argued that the council should not cut rates and "shrink our way to greatness" in the COVID-19 recovery.

Cr Capp's comments were disputed by deputy mayor Arron Wood and Labor-aligned Jennifer Yang – who have both proposed rate cuts – in a live virtual debate for The Age subscribers ahead of this week's council election. 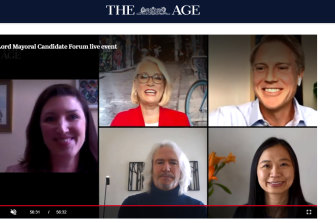 A reader's question submitted to Monday's event – which was moderated by Age city editor Bianca Hall – questioned how the council would raise revenue and fund services if rates are slashed to help struggling small businesses.

“What I think is amazing is that other candidates are talking about cutting rates, particularly commercial rates, which mean that they think we can shrink our way to greatness in our city. It is absolutely not possible,” she said.

Her main competitor Cr Wood hit back, saying that it was not "shrinking our way to greatness" to help struggling ratepayers.

“Taking pressure off ratepayers, easing the burden, isn't shrinking your way to greatness, it's actually listening to the pain out there.”

Rates were frozen in the City of Melbourne in the current financial year.

Ms Yang, who is running on the Back to Business ticket, wants a 10 per cent rate reduction and argued that there is enough waste in council to cut instead.

She pledged to cut the salaries for the chief executive and other council executives to make way for her rate reductions.

“There are a lot of areas we can really look at about how can we tighten our belt,” Ms Yang said.

She also proposed launching an efficiency review of the council's finances if she is elected lord mayor.

Cr Capp said it was time to safely reopen the city, while clamping down on hotspots of coronavirus cases and clusters.

Labor's Phil Reed also took part in the event to pitch his vision for a “COVID-normal” city.

Greens candidate Apsara Sabaratnam was unavailable to join the debate. The remainder of the nine lord mayoral candidates were invited to provide a 300 word statement outlining their policies.

The full recording of the hour-long debate is available to watch on-demand here.