Nothing sums up the madness of the modern world better than the Home Office’s gender neutral loos (that its female staff loathe), writes SARAH VINE

When the robot overlords of the future look back on the dying days of the human race, one key factor will surely stand out as the moment it all began to go down the pan: the rise of the gender-neutral lavatory.

Few things encapsulate quite so succinctly the madness infecting Western society as the unisex toilet. It stands for all the navel-gazing, minority-obsessed, virtue-signalling idiocy of our time. And, frankly, it stinks.

The latest example is a set of new gender-neutral toilets at the Home Office. Five male and five female loos have been ‘converted’ at a cost to the taxpayer of £36,000.

Signs with the words ‘Gender Neutral Toilets’ were apparently £8,000 alone. 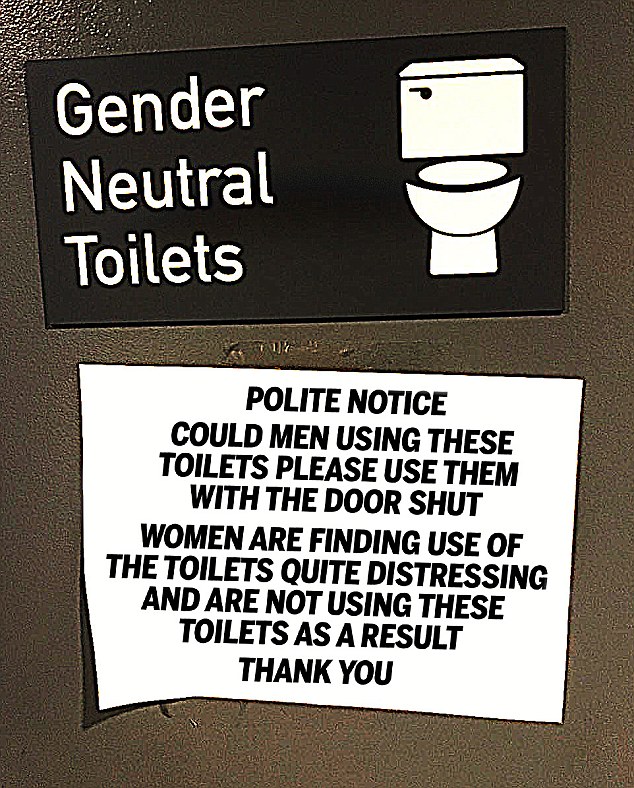 Yet this criminally expensive gesture towards gender equality has gone down very badly with the Home Office staff who have to use the new facility.

Beneath those £8,000 signs another message has appeared.

On a piece of paper with the heading ‘Polite Notice’ someone has written: ‘Could men using these toilets please use them with the doors shut.

Women are finding use of the toilets quite distressing and are not using these toilets as a result. Thank you.’

So terribly British, that final thank you. Because, in reality, what this notice means is: ‘You’ve ruined our existence with your idiotic virtue-signalling. Now, instead of being able quietly to go to the loo unperturbed, we ladies have to put up with the sight of blokes doing their business. And we CANNOT BEAR IT!’

What the gender-equality warriors can’t or won’t understand — but this ‘polite notice’ so plaintively expresses — is how deeply misogynist their relentless obsession with gender neutrality has become. How it strips women of not only their right to privacy, but their right to behave as they wish.

I don’t know how many women work in the Home Office, but I very much doubt they number fewer than transgender male staff.

And yet the sensibilities of the latter are being prioritised over the very real needs of the former by some susceptible mandarin whose only priority is to comply with an absurd vision of political correctness.

Whitehall is not the only culprit. Everywhere you look — in schools, prisons, universities, local authorities and businesses — you will find people in authority too cowardly to push back against this relentless drive to enforce the whims of the few at the expense of the many.

Only this week, the comic Jack Whitehall was subject to virulent criticism because Disney cast him as its first ever gay character in a new film, Jungle Cruise.

Despite the fact the public overwhelmingly supports the idea — possibly because Whitehall is an accomplished actor and his job is to, well, act — a strident minority in the LGBT community are demanding the role should be played by a gay person. 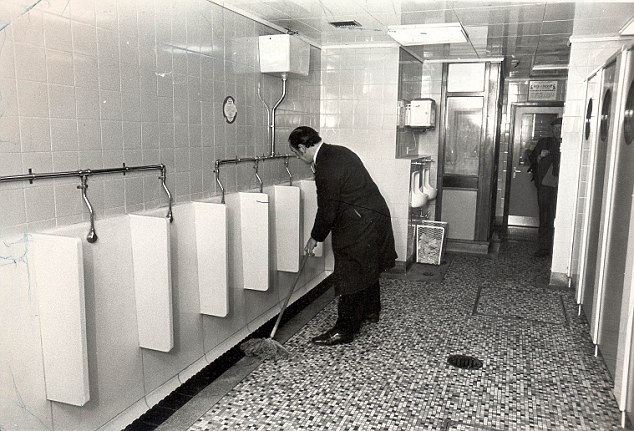 So far, Jack Whitehall and Disney are standing firm, but actors in the past have buckled under such pressure. Earlier this year, West End star Sierra Boggess, who is white, withdrew from a BBC Proms performance of West Side Story because of objections to her playing the role of Maria, who is Puerto Rican.

Not only is it fundamentally undemocratic to allow a small number of minority-interest campaigners to dictate how we should live our lives, it can also be deeply impractical — especially in the case of loos.

Let’s face it, men and women have very different requirements when it comes to lavatories. Not to mention different standards.

And yes, it is all to do with the differences between our male and female bodies.

What could possibly be wrong about acknowledging and respecting that?

Everything, it would seem. Because in the twisted logic of the modern world, a woman has more rights if she has elected to become one via hormone therapy and surgery than if she were born one.

And that is madness.

It’s not just that female-only toilets provide safe, private spaces where women can tend to their needs without stepping in a puddle of dubious origin.

It is also that the ladies’ loo in any workspace has for decades served as a vital refuge — and recharging station — for the millions of us who have had to put up daily with the testosterone-charged atmosphere of the office.

In the bad old days when chauvinism was rife — and today’s young women have no idea just how tough things were before previous generations cleared the path for them — a trip to the Ladies’ could mean the difference between survival and being carried out feet-first, just another woman who couldn’t cut the mustard in a man’s world.

Even today, the Ladies’ is the one place at work where, as a woman, you can let your guard down. Where no man can follow you, harass or harangue you. Where you can let yourself have a bit of a cry.

I have counselled countless distraught female colleagues between the hand-dryer and the sink, listened to innumerable tales of fury and frustration, taken millions of deep breaths myself, looking deep into the mirror and telling myself to just get back out there and show them what I’m made of.

As for the gossip, no better place exists than the Ladies to catch up on all the latest. Not just who’s dating whom, who’s up and who’s down — the number for this or that shrink, hairdresser, manicurist, expert on childbirth or the menopause.

When I returned to work after having my children, it was where I went to express breast milk in peace and at my own pace. Why should any new mother have to do that in a ‘gender equal’ space?

That is the tragedy of the gender-neutral toilet. Why it is such a grotesque act of stupidity.

And the great irony is that it is being introduced in the name of equality — for it discriminates against women, the sex that has suffered so disproportionally from discrimination over the centuries.

To dismiss those of us who oppose these so-called gender-neutral spaces as non-inclusive bigots is one of the biggest collective acts of sexual aggression towards women we have seen in recent years.

In seeking to uphold the rights of men to re-cast themselves as female, we are invading precious and vital women-only spaces in a manner that is offensive and even intimidating towards women.

The Home Office is one thing. I don’t imagine many of the men who work there are anything other than nice, middle-class civil servants. But as this insanity spreads to schools, colleges, even prisons, the opportunities it provides for male aggressors are chilling.

Women are patient creatures. We don’t like the thought of upsetting people, especially some perfectly innocent transgender person who just wants to feel more accepted by society.

But the fact is that gender-neutral toilets mean our rights are fundamentally under threat. So, no more ‘polite notices’, ladies. It’s time to flush out this insanity.