‘Caring and helpful’ schoolboy boxer, 14, hanged himself in his bedroom a week after beloved dog who’d been his ‘best mate’ since he was four was put down

A schoolboy boxer who dreamed of becoming a fighter was found hanged in his bedroom by his mum – after his pet dog was put down.

Seb Morris, 14, took his own life a week after the death of his beloved ‘best friend’ dog, an inquest at the Somerset Coroner’s office heard on Wednesday.

His tearful mum Claire Morris revealed in a statement how the family dog Tilly was put to sleep in November 2017.

Ms Morris said they had had the pet since Seb was four years old and her death struck the schoolboy hard. 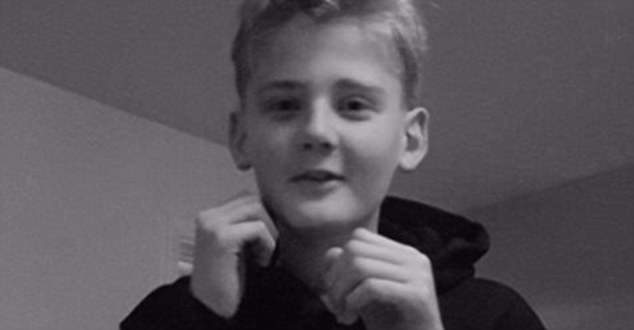 Seb Morris was found dead in his bedroom by his mother. He had dreamed of becoming a professional boxer

Tilly was buried in the back garden of the family home in Taunton, Somerset, the court heard, and Seb spent an hour sitting at the burial site listening to music on his headphones.

He was off school for two days but seemed ‘much better’ having slept with Tilly’s blanket, his mum said.

However, an emotional Seb told his mother Tilly had been put down too soon and did ‘not have the chance to get any better’.

A week after the dog’s death Seb took his own life.

The evening before his suicide the young boy ‘seemed to be fine’ and was playing boxing with Claire’s partner Paul Few before he went to bed, the inquest heard.

The next morning Claire took her two younger daughters to a party and Seb was in his pyjamas in bed on his iPad.

But when she came home and went to check on Seb she found him hanged in his room.

Seb’s mother desperately attempted CPR while her partner called an ambulance, but it was too late. 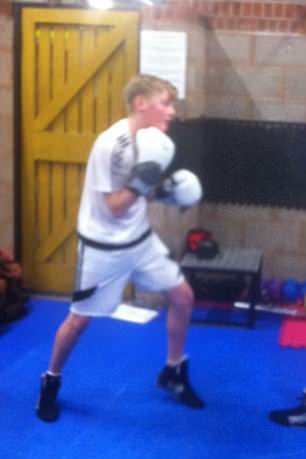 Seb Morris, 14, was devastated by the loss of his dog ‘Tilly’

Claire, who said she was close with her son, said Seb had previously taken overdoses of paracetamol on two occasions in the months before his death, but he did not take up counselling from school.

She added that Seb was a ‘well liked child with a good circle of friends’ who was training hard to become a boxer.

Although he did not have a relationship with his father he said Paul Few was the ‘best dad he ever had’ according to his mother.

Earlier Paul Few said: ‘We are devastated. Words cannot describe our feelings. Seb was so caring and helpful.

‘He was popular and had masses of friends. He was intelligent and would have gone a long way.’

‘He started boxing 18 months before and aimed to be a professional boxer.

training four times a week – he was super fit.

‘Seb enjoyed socialising with his mates at the weekend. If he went out in the evening he’d never let a girl walk home alone.

‘He was a happy boy who’d have a laugh and enjoyed play fighting with me. He was a decent 14 year old.’

Somerset senior coroner Tony Williams recorded a narrative conclusion saying: ‘There is no great background of angst or ongoing problems bearing down on him.

‘He suspended himself but his intentions at that time were not clear. He was 14.’

Mr Williams said he could not put himself in the teenager’s shoes to find out ‘what the outcome might be from his actions’.

For confidential support in the UK, call the Samaritans on 116123 or visit a local Samaritans branch, see samaritans.org for details.