Los Angeles: On the day that one becomes an octogenarian, nature bestows a mathematical birthday gift: a gradual reprieve from the relentlessly increasing likelihood that he or she will die in the coming year.

That gift may come as small comfort against the growing creakiness of joints and the still-mounting probability that the end is nigh. But an analysis of close to 4000 very long-lived Italians suggests that the rise in the risk of imminent death continues to slow until the age of 105. After that, researchers estimate, the chance of making it to see another birthday holds steady at roughly 50-50. 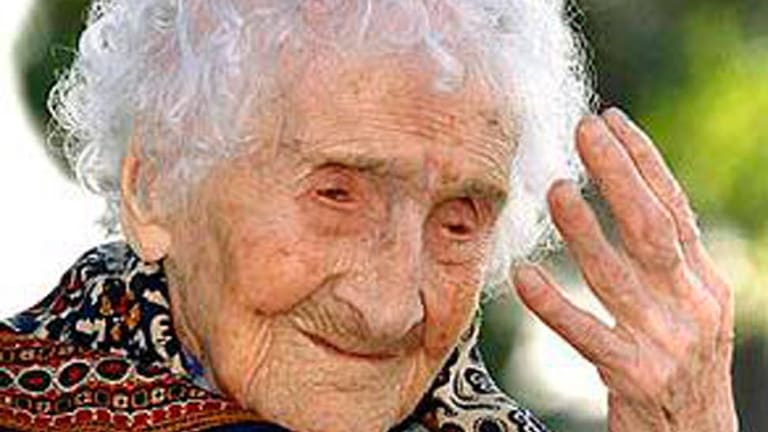 The oldest woman ever was Jeanne Louise Calment of France. She was born in 1875 and lived 122 years and 164 days.

Perhaps it's "nothing to blow a trumpet about," said University of California, Berkeley demographer Kenneth Wachter. But at least the mortality rate levels off, the data suggest.

Wachter and colleagues from universities in Italy and Germany published their findings in Friday's edition of the journal Science.

For humankind in general, these findings hint at an intriguing, if largely theoretical, prospect: that the maximum possible human lifespan – essentially, the species' design limit – has not yet been reached. It may even be extended by means as yet undiscovered.

If the "oldest old" tell us how long we could live, then many centenarians could, in principle, get even older. And maybe older still with the right elixir.

"This data suggest our genetic heritage is permissive," Wachter said. "Our bodies are not put together so that at some point, everything goes wrong."

Indeed, he said, there's reason to believe that some humans could beat the current longevity record of 122, which was set in 1997 by Jeanne Louise Calment of France.

The new research contributes to a debate that has preoccupied poets and philosophers for as long as they have set pen to paper. For instance, the historian Gaius Plinius Secundus, better known as Pliny the Elder, maintained a running tally of long-lived persons and pondered the significance of their longevity.

Scientists have been in the fray since at least 1825. That's when the British mathematician and actuary Benjamin Gompertz published the first models of human mortality and asked when, and whether, we must die.

In the new study, the international team of demographers and statisticians took advantage of the proliferation of people who live well past their 100th birthday. By calculating and analysing the death rates of 3836 well-documented cases of Italians who lived to 105 or beyond and combining them with existing data on mortality rates, the researchers created a model that reveals the statistical likelihood of death in every year of the human lifespan from 65 to 105.

Established demographic data show that after 65, people grow more likely to die with every passing year. And the math is unforgiving: Each year after 65, the probability of death rises at a pace that's double what it was the previous year.

But when the researchers added the 3836 long-lived Italians to the earlier data, they saw that this doubling held up only until the average human's 80th birthday. After that, the rate of increase began to slow.

For the lucky humans who made it all the way out to 105, that annual increase in the probability of death seemed to stop.

The authors also showed that the annual mortality rate in those aged over 105 declined slightly with each successive birth year, such that those born more recently tended to live longer.

This pattern "strongly suggests that longevity is continuing to increase over time and that a limit, if any, has not been reached," wrote the team, which included demographer James W. Vaupel of the Max Planck Institute for Demographic Research in Germany.

"Our results contribute to a recently rekindled debate about the existence of a fixed maximum life span for humans," they added. In any event, it raises "doubt that any limit is as yet in view".

To University of Illinois epidemiologist S. Jay Olshansky, the evidence for the counter-argument – that there is a strict limit to the maximum human lifespan and we have reached it already – is right there in the new Italian data.

"The conclusion that they've come to, which is that there is no upper limit to life, is unreasonable," said Olshansky, who was not involved in the new research.

By the time people reach these extreme ages, at least half disappear every year. And since there are so few of them to begin with, this harsh reality "tells us the real story," he said.

"If 100 people survive to age 110 out of billions – which is exactly what has happened – what difference does it make if it's 50 or 60 that die before their next birthday?" he said. It's just not persuasive to use such a small difference, drawn from such a tiny population of humans, to conclude anything about the longevity of humans in general. Statistically speaking, he said, "the tail of the survival distribution does not wag the dog."

This should be abundantly clear to anyone who has ever been around senior citizens, he noted. "Human bodies are not intended for long-term use, and when we do manage to get them to operate past a century, plenty of age-related diseases accumulate," Olshansky said.

Geneticist Jan Vijg of the Albert Einstein College of Medicine in New York believes he has seen the limit of the human lifespan, and said it ceased its upward trajectory in the 1990s with the death of Calment. (The Frenchwoman ascribed her longevity to the fact that she didn't worry much and had a diet rich in olive oil, port wine and chocolate.)

For a study published in 2016 in the journal Nature, Vijg and his colleagues calculated that if scientists could cobble together 10,000 people who had reached the age of 110 – a big if – only one of them would be expected to live beyond 125.

Vijg, who was not involved in the new study, praised the authors' ability to generate a new and well-documented database of very long-lived individuals. But "their data does not substantiate the claim" that the maximum limit to human lifespan goes out much further than it has already, he said.

Vijg says he is "amazed" at the vigour of the scientific debate around an issue that is so distant from the reality of ordinary mortals. The outer limit of the human lifespan is an "intriguing scientific debate," he said. But improving the average lifespan of all humans – by extending gains in nutrition, creating new medicines and addressing the causes of infectious diseases – is a better way to spend one's energy, he adds.

"There is lots of opportunity here, no doubt," Vijg said. "We can improve quality of life more and maybe give more people more life."

What do the new numbers tell us about life and death at the outer limits of the human lifespan?

Think of aging as if it's a treadmill: You're power-walking along in your early 60s, and around the time of your 65th birthday, the pace at which the treads move under your feet starts to pick up.

With each passing year, the speed grows. In fact, the rate of this change doubles every year.

Fail to keep up and you die.

Around the time of your 80th birthday, the rate of this increase begins to slow. You're still more likely to die with each passing year than you were the year before, but your treadmill isn't speeding up quite as much.

And by the time you reach the age of 105 – surprise! – the yearly quickening ceases altogether.

Now imagine yourself in a gym filled with treadmills, each occupied by people of different ages. The 105-year-olds are running faster than everyone who is younger. And they are falling off their treadmills – dying – at a much higher rate than are the 70-year-olds. Indeed, only about half of them make it to 106.

But if they do, they get a little break: Their treadmills are still the fastest in the gym, but at least they're not getting any faster.