Scottish Parliament rejects Brexit bill in challenge to May

Edinburgh: The Scottish Parliament has voted against British Prime Minister Theresa May's landmark Brexit legislation, setting up a potential constitutional crisis and further complicating the path to an orderly UK departure from the European Union. 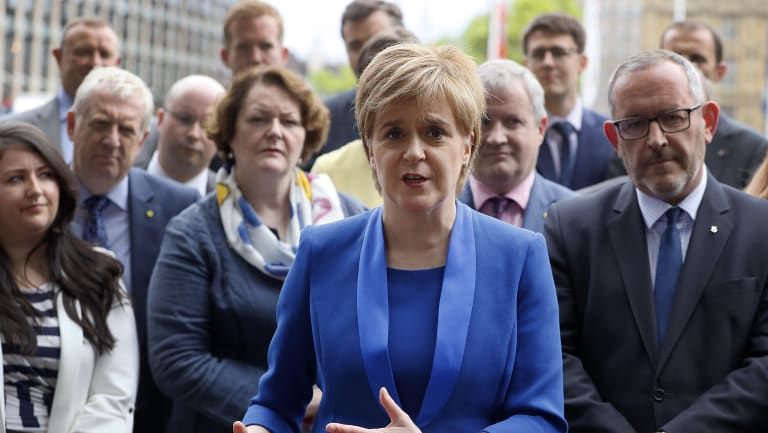 Nicola Sturgeon, First Minister of Scotland and the leader of the Scottish National Party, centre.

Lawmakers in Edinburgh voted 93-30 to withhold consent for the EU withdrawal bill on Tuesday, local time. The UK can disregard the vote, but it would be the first time London asserts its dominance over the regional Parliament.

May had pledged to seek a Brexit that works for all the UK's nations, but Scotland – which voted to remain in the EU in the referendum – is accusing her of a power grab.

"This is a historic and significant moment for the Scottish Parliament and I hope with all sincerity that the UK government will respect the views of this Parliament," Bruce Crawford, who heads the assembly's Finance and Constitution Committee, said after the vote.

May's legislation has already been torn apart by the House of Lords and another battle awaits her when it returns to the lower House of Commons. At the same time she's struggling to unite her Cabinet over what kind of relationship the UK should maintain with Europe, while trying to head off a mutiny by some of her lawmakers.

May now has to decide whether to press ahead despite the vote or make renewed efforts for some kind of compromise. 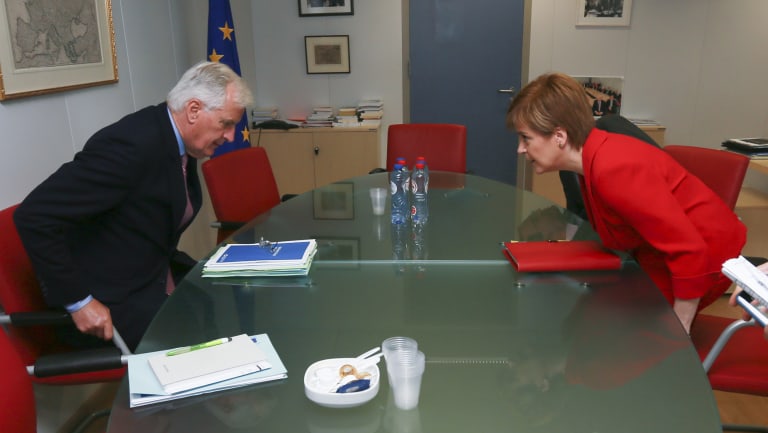 Overruling Holyrood, the Scottish Parliament, would be politically sensitive – particularly over such a historic move as Brexit – and would set a precedent in a constitutional set-up that's only 20 years old. It also risks playing into the hands of the nationalists who are trying to build a case for another independence referendum.

"It would be a big moment in terms of the relationship between Westminster and Holyrood as this has never happened before and I don't think anyone wants to reach that point," said Akash Paun, senior fellow at the Institute for Government in London. "But the government might ultimately feel it has no alternative."

Scotland voted to remain in the EU after voting to stay a part of the UK in its own referendum in 2014. First Minister Nicola Sturgeon, whose pro-independence Scottish National Party runs the semi-autonomous government in Edinburgh, vowed straight away to contest Brexit by holding another vote on breaking away from the rest of the UK.

Public talk of defying Brexit, though, dissipated after May's governing Conservative Party increased support in Scotland in last year's election, even as she lost her UK parliamentary majority. The SNP had its wings clipped and the narrative shifted to how Scotland can keep the powers it has after Britain leaves the EU.

"The SNP has to wait and see what happens with Brexit," said Nicola McEwen, politics professor at the Centre on Constitutional Change at Edinburgh University.

"If the constitutional issue becomes about devolution and not about independence, then that helps them and not the Conservatives. It becomes about self-governance."

Scotland is responsible for its own education, health and transport policies as well as the judicial system and some financial affairs. The UK ceded more autonomy as part of promises made during 2014's independence referendum campaign.

Tuesday's vote on May's EU withdrawal bill followed a convention in UK politics that allows Scotland a say because the changes will affect policy areas it currently controls.

The Scottish Parliament passed its own version of Brexit legislation, called the Continuity Bill, in March by a margin of 95-32 to ensure it retains control of areas that are currently devolved after Britain formally leaves the EU.

The British government said it would refer that bill to legal officers and a hearing is scheduled for July in the Supreme Court unless agreement can be found before then.

Scottish Brexit Minister Michael Russell said he hoped May's team would accept his proposed solution of amending the clause allowing the UK to change EU laws affecting Scotland, and said the UK government needed to show more flexibility in future talks. He also urged it to respect the outcome of Tuesday's vote.

"We'll go on talking and we'll work with the other parties on this," he told BBC Radio 4. "But this is about protecting devolution which the people of Scotland voted for overwhelmingly, and there is no mandate to undermine that."