The family’s carefree walk through the woods, posing for selfies and climbing trees, had suddenly taken a terrifying turn. 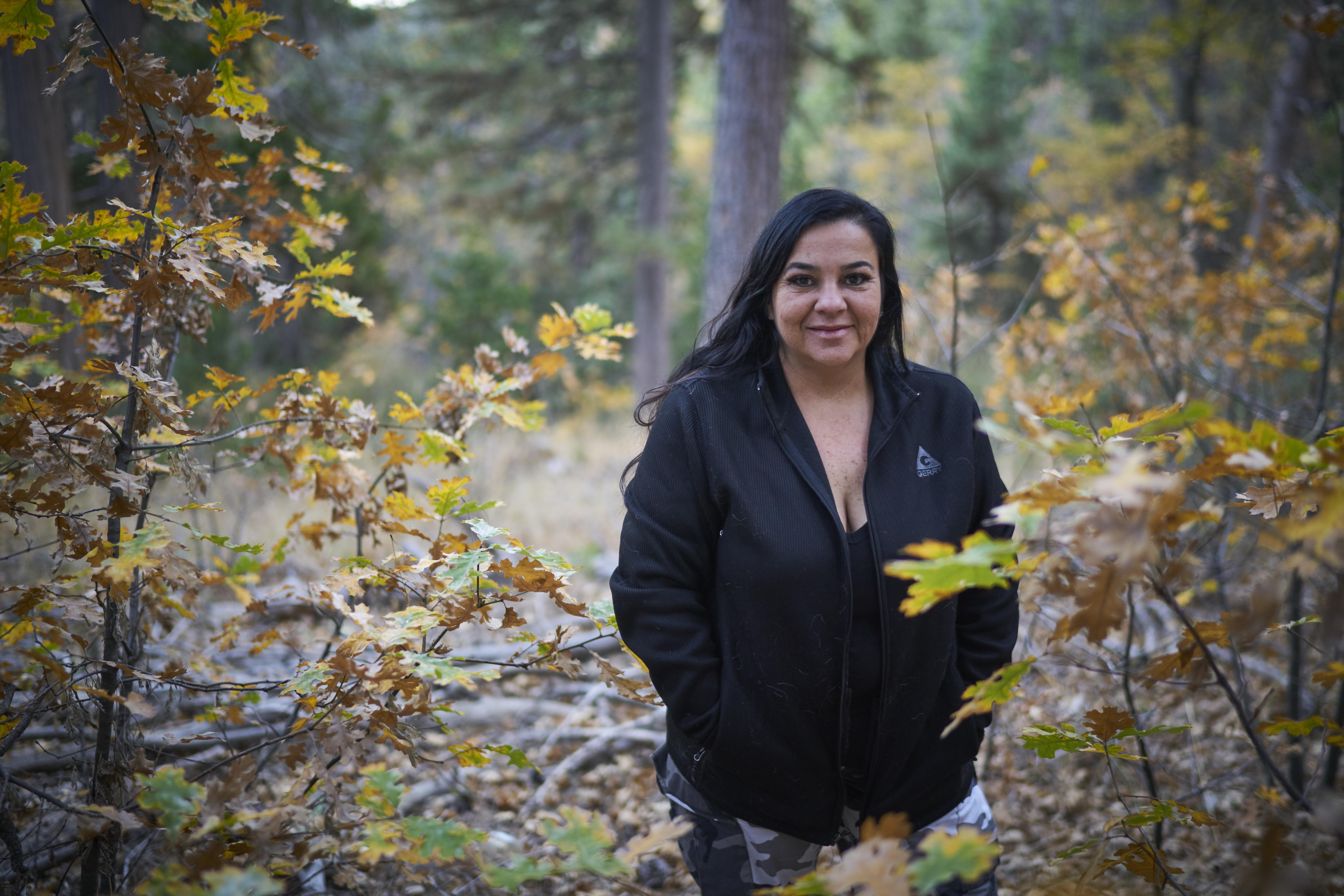 “Are you seeing what I’m seeing?” Claudia asked her petrified kids, who nodded as her motherly instincts took over and she positioned herself in front of them.

Claudia, 47, who is used to dealing with bears and other animals near her home in the mountains of Big Bear, California, then loudly “whooped” at the creature to try warn him off.

She turned to her daughters Christina, then 14, and Jenna, then 11, who were panicking and hyperventilating- and told them to slowly walk away, as the mysterious hairy creature looked on.

Brave daughter Christina managed to press record on her iPhone and grab a few seconds of footage before the stunned family walked back up the trail to safety. 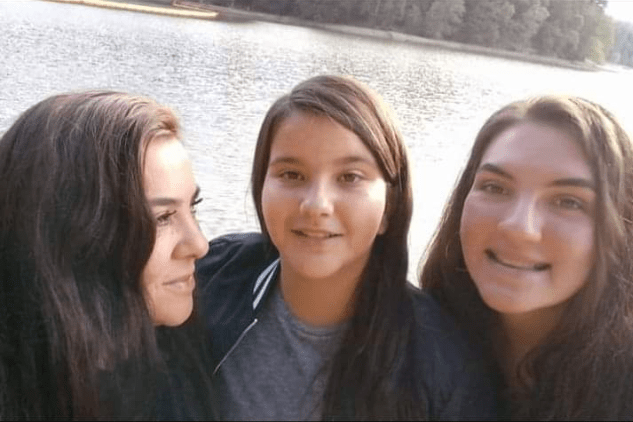 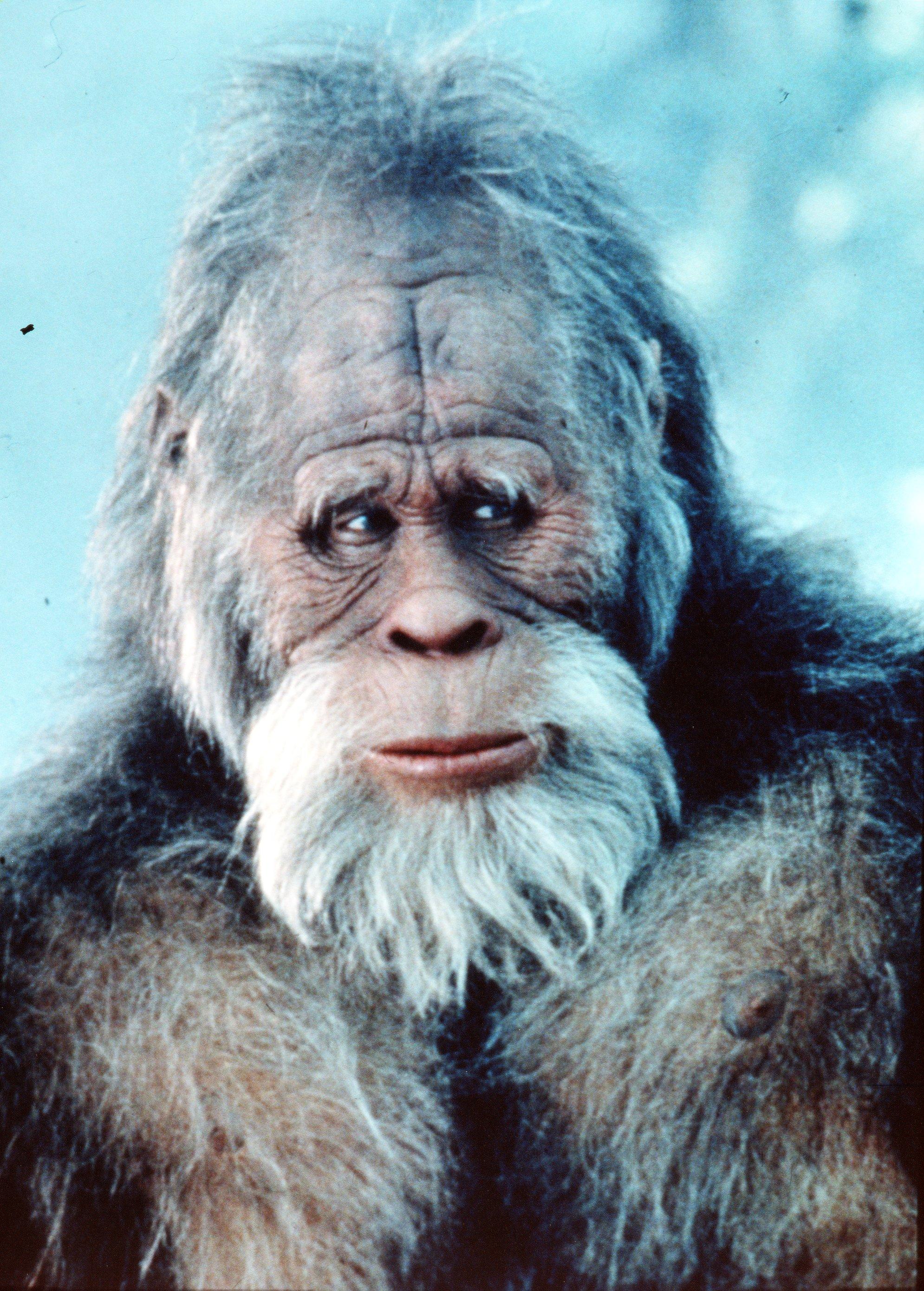 Claudia, who works at a local hospital, has no doubt the creature they all saw was a Bigfoot – also known as a Sasquatch, a giant ape-like folklore creature- and since that day has dedicated her life to proving the existence of the infamous creatures, even suing the state of California in a bid to force them to take the issue seriously and investigate the hundreds of sightings in the area.

Sun Online accompanied Claudia as she retraced her steps along the same mountain trail just a mile or so from her home – to the place she believes she saw the creature perched 30 foot up a tree.

A neanderthal man with messy hair

“It was terrifying – a life-changing experience," Claudia tells Sun Online.

“It was about 6:30pm at night and we decided to go on a hike along this trail after dinner – we were having a great time, my daughter was making lots of silly videos on her iPhone and we were taking photos. 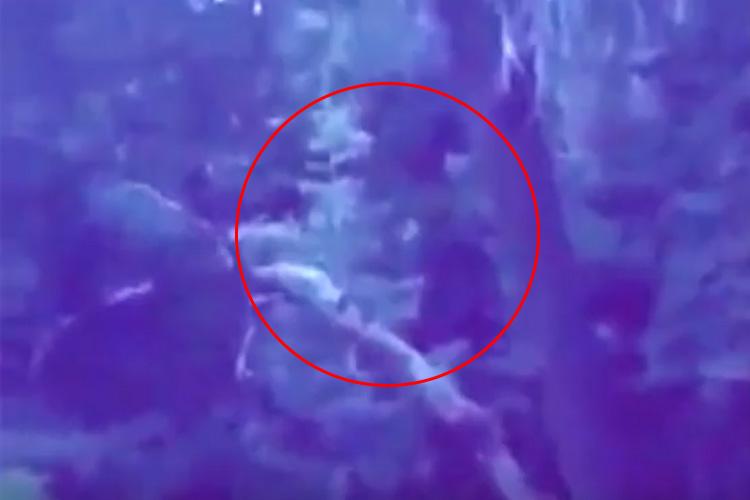 “All of a sudden I see my youngest daughter frozen and she looked at me with a look of fear in her face – and I immediately thought there was a bear in front of her.

“Then my eldest daughter caught up with her and she too was frozen which confirmed to me they’d seen something.

“As a mom you’d die for your kids, so I immediately ran about 20 feet in front of them and as I'm looking straight at the trees in front of me there was an enormous creature – this thing is about 800 pounds with a huge head – like three of ours – with huge ears and black almond-shaped eyes. He was like a neanderthal man with lots of messy hair.

“He was kind of perched about 30 feet up between two branches of a tree and I'm looking at it, trying to register, ‘What is it this? What am I looking at?’ 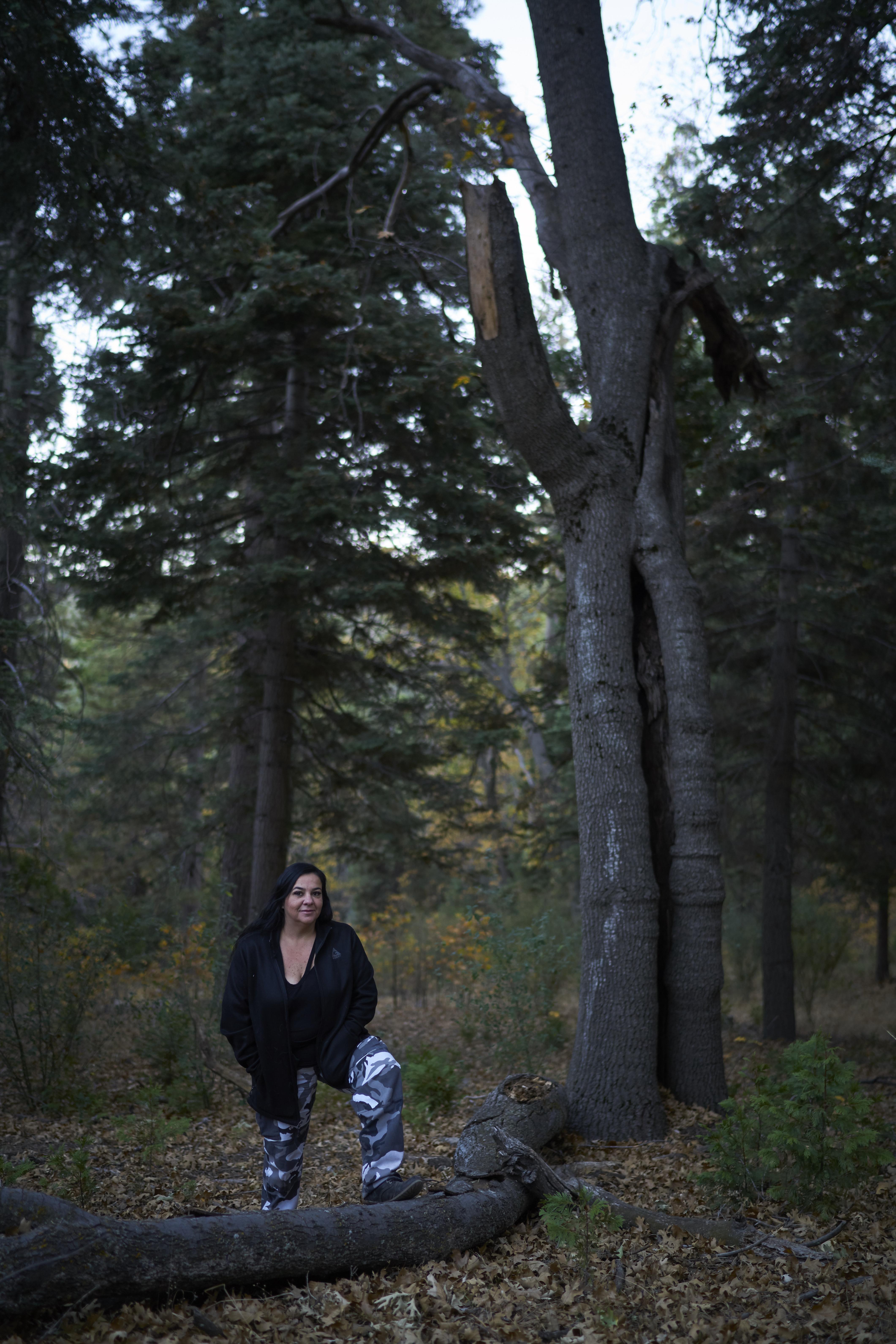 “I ask my daughters: ‘Do you see a head, do you see eyes, do you see shoulders? It was like I was confirming, ‘Are you seeing what I'm seeing?’ and they said, ‘Yeah, yeah’.

“Then I decided to ‘whoop’ at him loudly – I wanted to warn him, ‘Look at me not my kids’.

“I saw him scratch his face and then he started swinging back and forth in the tree and I knew I had to get my kids out of there.” 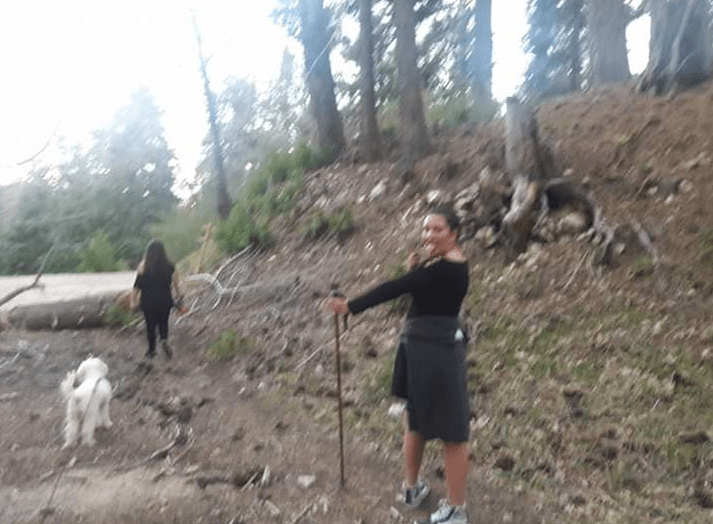 When the shell-shocked family finally made it back to the car, youngest daughter Jenna revealed how she’d actually seen three of the creatures – the large one in the tree and two smaller ones.

The day after the sighting on March 27, 2016 Claudia visited the same tree and discovered 22 inch footprint and a 13 inch footprint near the site – both with five toes.

She began looking into the issue and found there were thousands of similar sightings around the US.

Claudia put a sign up on the trail encouraging anyone who had an “unusual” experience on the trail to get in touch “without judgement”.

The sound of a woman getting raped 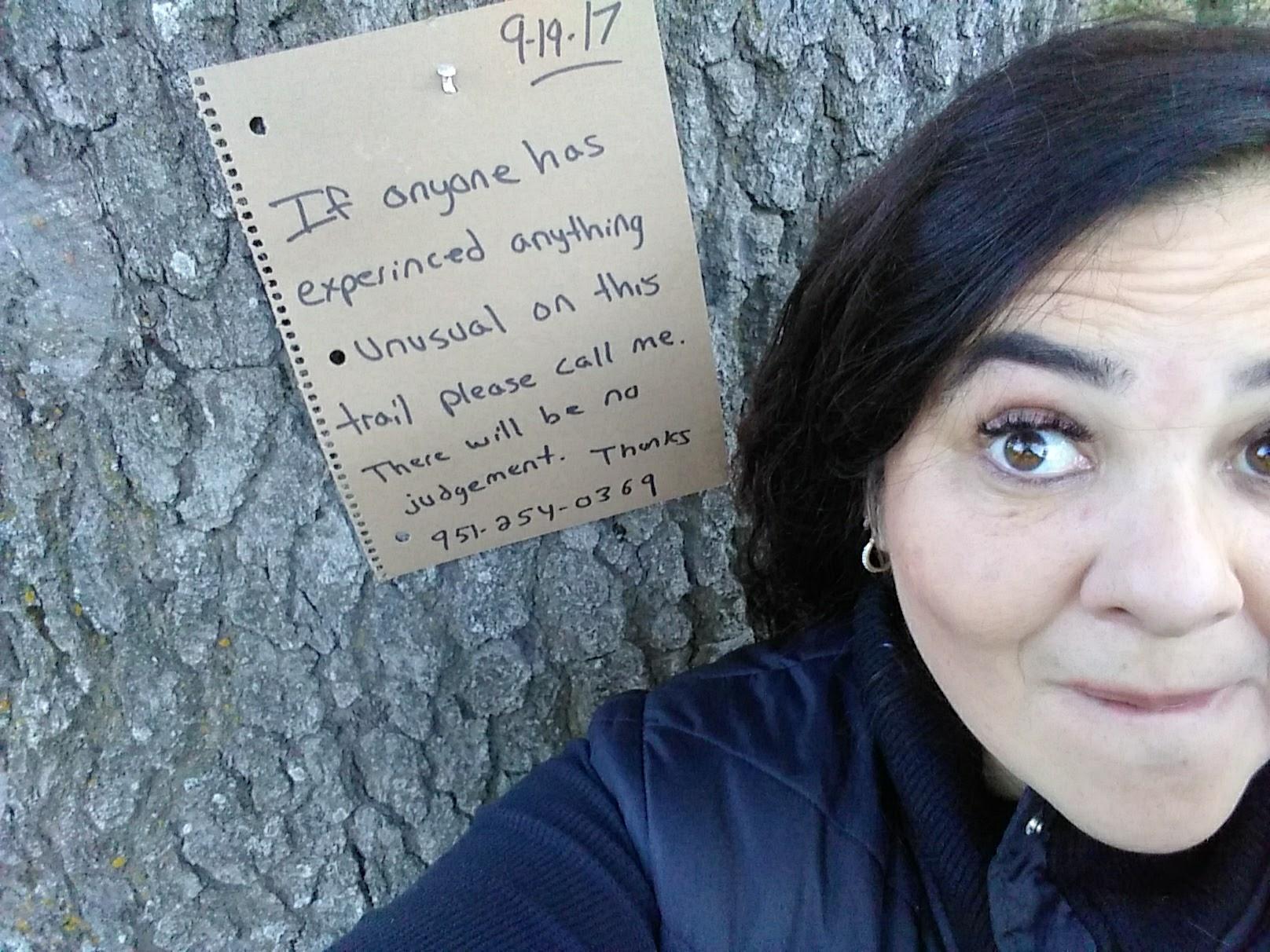 She received six phone calls from locals within two weeks, many of who had heard mysterious noises or had sightings themselves.

One caller said they regularly heard screams that sounded like “a woman getting raped” along the trail.

The mum-of-two is now campaigning to get authorities to take the issue seriously and has even filed a lawsuit against the state of California for failing to protect the public from the creatures.

She ended up withdrawing her first lawsuit, filed in January, to try and gather more evidence and is about to file her second lawsuit in the next few weeks.

And after she and her two daughters struggled emotionally after the encounter – struggling to sleep and experiencing flashbacks – she’s also decided to set up a PTSD group for survivors of Bigfoot sightings. 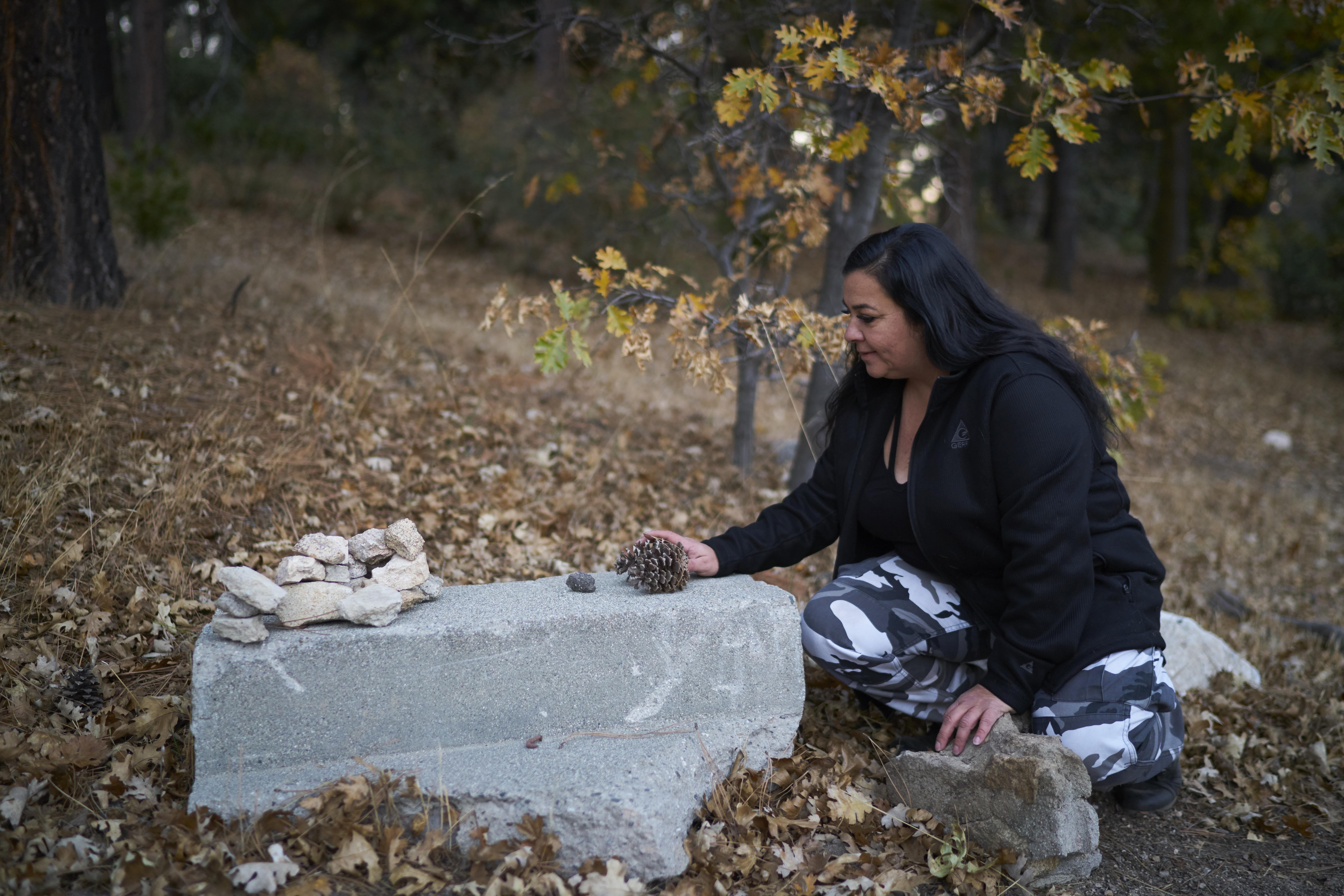 “I’m on a quest now to try and help people," she explained. "I'm suing the state of California for their dereliction of duty and my mission is for the Fish and Wildlife authorities prove the existence of Sasquatch.

“As far as the lawsuit goes, I don't have to prove they exist I just want the wildlife authorities to do their job and they will surely prove their existence.

“So that if they get a report of a sighting they don't laugh they go investigate. I get 30 messages a day from all over the world from people who have had sightings saying, ‘Thank you for what you’re doing – we don’t know what to do’.

“There is far too much evidence to dismiss this – it’s a public safety issue. 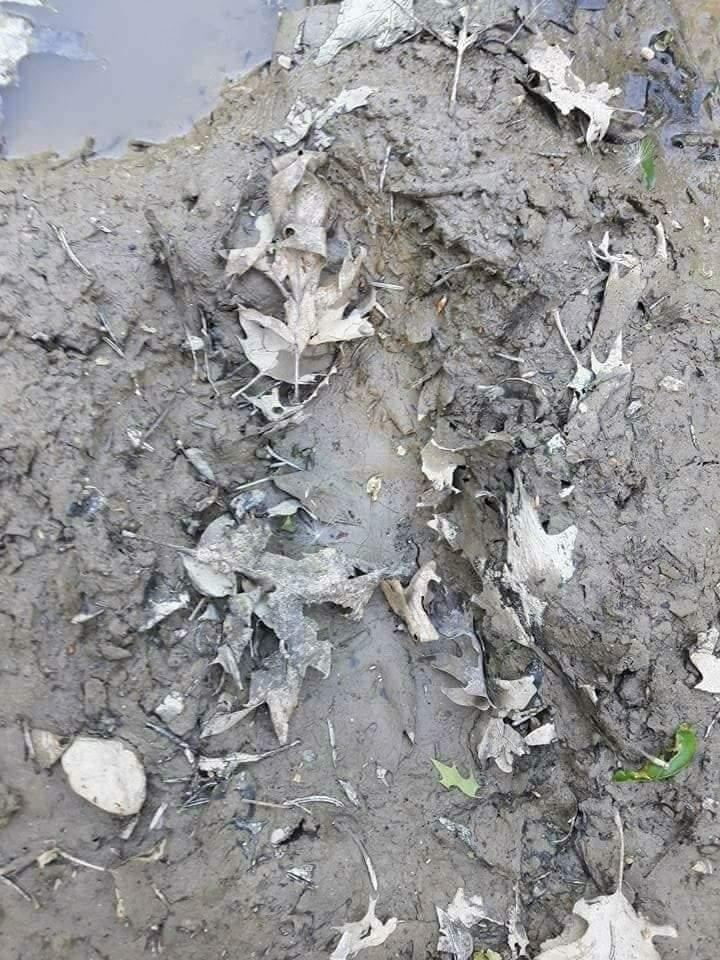 “There’s been hundreds of unexplained disappearances of adults and children in our national parks that could be linked to these creatures.

“I also hope to set up nationwide PTSD groups where people who have had encounters can go and talk about it and deal with the aftermath without ridicule.”

Since the sighting Claudia has been attempting to communicate with the creatures, leaving gifts for them in the woods and stacks of stones and pine cones in different patterns.

She even made a picture book with recorded audio – to try and teach them language. 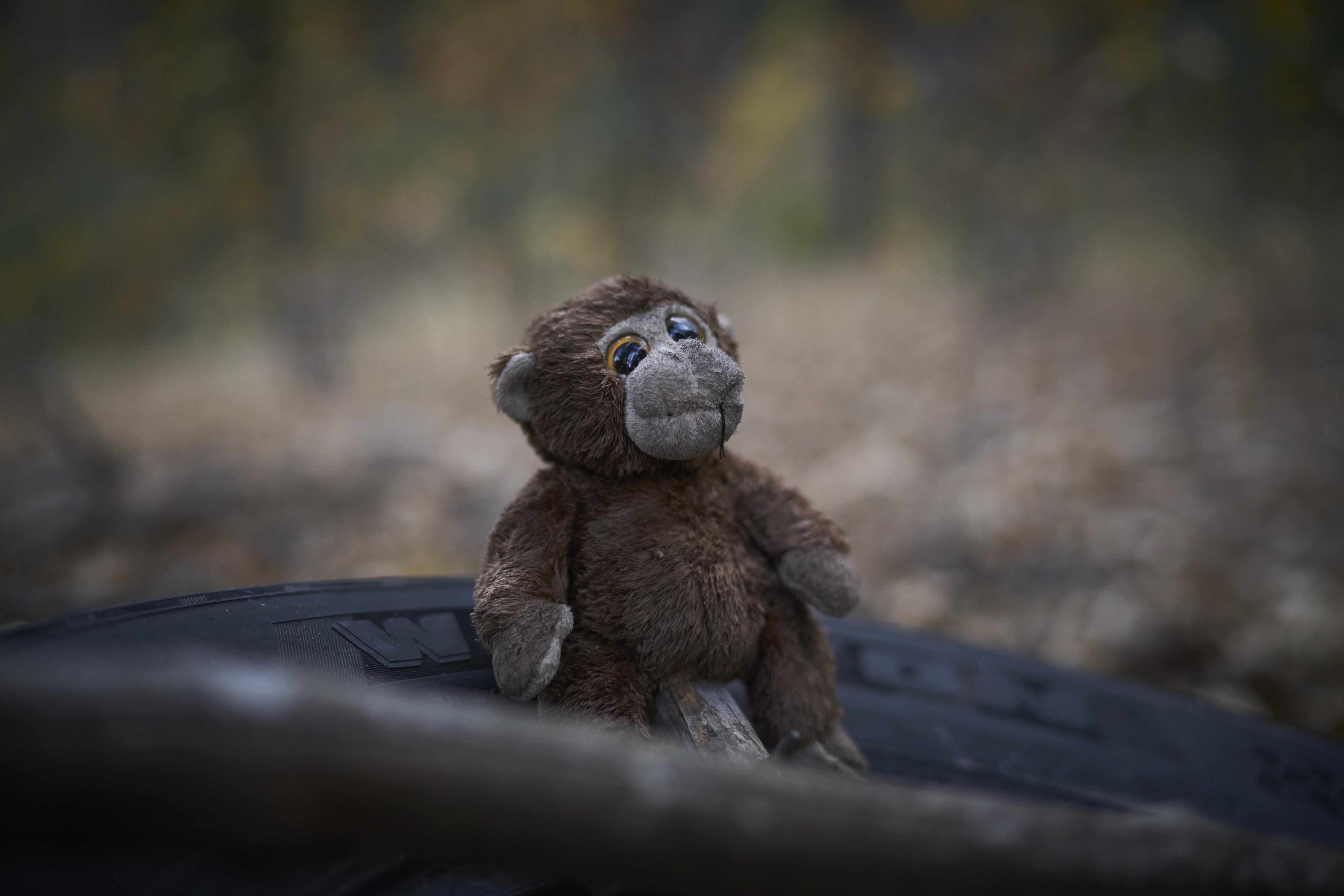 “We've noticed a lot of primate behaviour in this area – there’s a lot of tree breaks, things that are twisted, not broken, like with natural winter weather," Claudia said.

“We've also noticed that there's rock stacks – and bears don't pick up rocks and make like little pyramids and they're all over these woods and I'm there signs of them as an example.

“I made a book for them and it's basically my voice. You record my voice on this book and you can put pictures of whatever you want and basically tell a story and it records your voice. “We put recorders out in the woods in the middle of the night. Something came and opened up the book and turned the pages – you can hear my voice in the recording.

“It's interesting because of course it could be human, but who's going to be walking in the woods at two in the morning and find my gift?”

Claudia and Bigfoot researcher Ed Brown have also managed to obtain finger prints and other evidence from the area that they have sent for DNA testing.

So far results have come back as “unknown primate” – which Claudia believes should be enough to launch an investigation into the creatures. 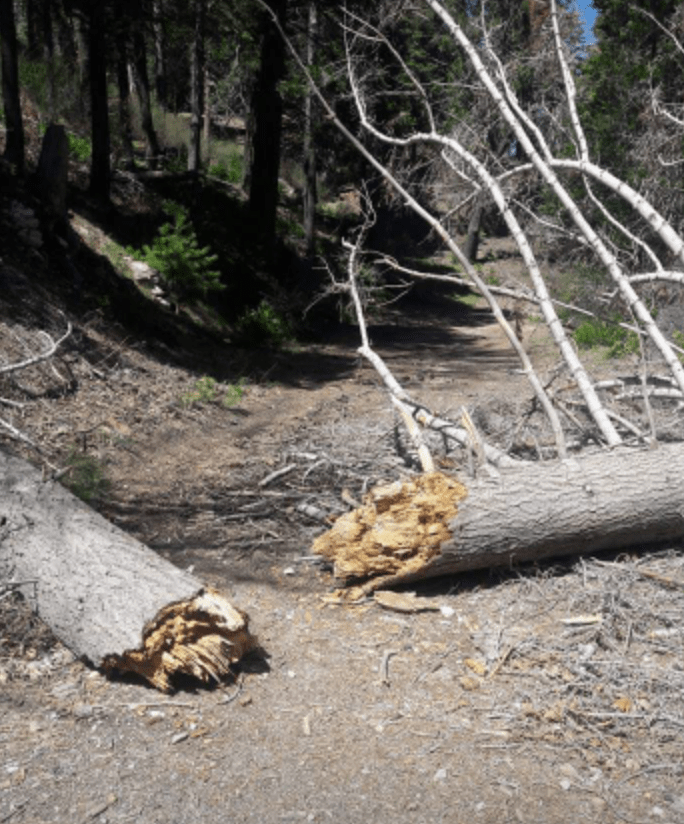 “They say that monsters don't exist or these creatures are just a myth and they're not – we have DNA evidence to prove they exist,” she said.

“But in my heart I always told myself, this is really important. If I was leaving that trail that day and saw like a family coming on the trail, what would I say to them? Don't go over there – there’s a Bigfoot?

“They'll say, ‘She's crazy what are you talking about?’ But the truth is there are these huge bipedal primate type species in these woods.

“So I feel I have to share my experience with people. It's just my quest and I'm not going to stop until something happens.

“I've offered to take a lie detector, test, a drug test, a psych evaluation, whatever I need to prove my story to people – this happened and we need to take it seriously.”