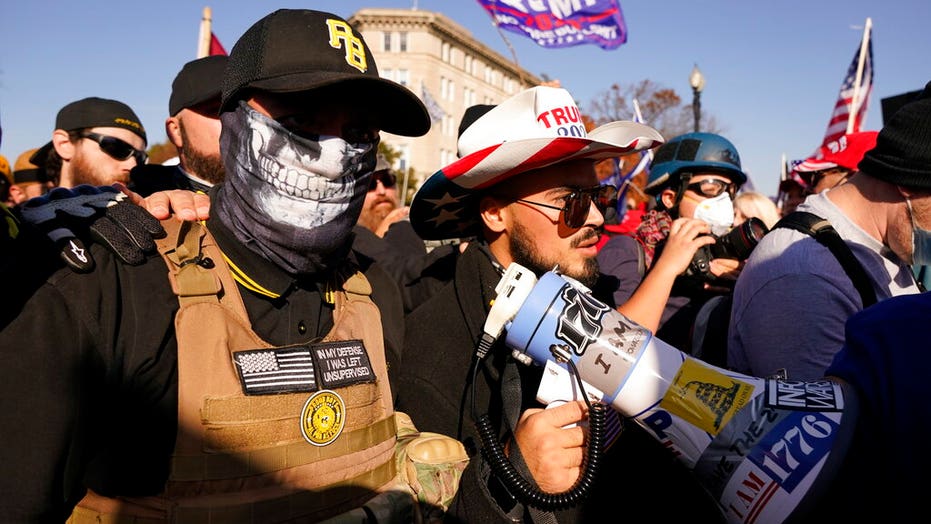 President Trump made a drive-by appearance as his supporters gathered in Washington, D.C., Saturday for a recount rally, where a few pro- and anti-Trump factions later traded punches.

The scuffle broke out at the edge of a crowd of thousands of Trump fans who flocked to the heart of the nation’s capital to boost the president’s election-recount efforts and to back his refusal to concede.

Black-clad members of the group Refuse Fascism got into a shouting match with Trump supporters as speeches got underway. Punches were exchanged – with one Trump backer swinging a megaphone as a weapon — as heated rally goers pushed the counter-protesters away from their group and toward police officers trying to keep order.

Trump appeared two hours before the crowd swelled at Freedom Plaza, two blocks from the White House, at the rally’s noon start time — in keeping with his Friday tweet that hinted that he might stop by.

The presidential motorcade looped around a crowd of hundreds of earlybirds – some lofting signs reading “Thou shalt not steal” – who whooped and chanted “Four more years!” as the vehicles circled.

The National Park Service issued a permit Friday allowing up to 10,000 people at a rally organized under the banners “Million MAGA March” and “Stop the Steal,” among others.

The plaza can hold about 13,000 — but more than 300,000 joined the “Stop the Steal” organizing group on Facebook before it was removed by the tech giant.