London: The drone that continues to bring Gatwick airport near London to its knees is no bigger than a seagull. About a foot across, the drone's operator (or possibly operators) had by last Thursday night, UK time, managed to toy with police, a helicopter and marksmen for 24 hours.

The result has been chaotic, embarrassing and devastating for more than 100,000 passengers desperate to get somewhere in time for Christmas. 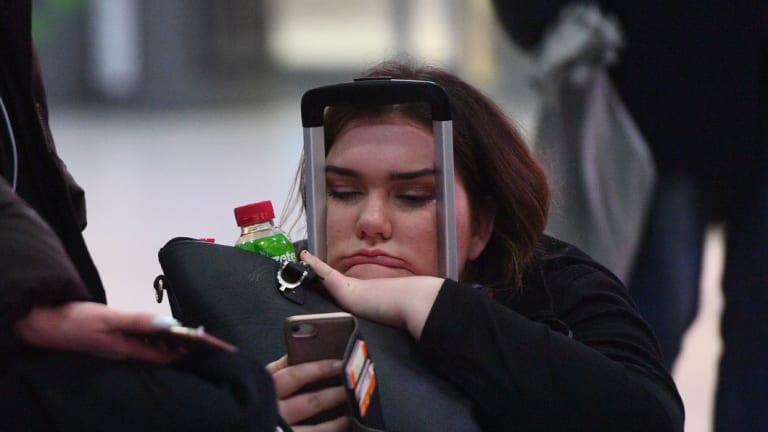 People wait at Gatwick airport, as the airport remains closed after drones were spotted over the airfield last night and this morning, in Gatwick.Credit:PA/AP

Stranded travellers – and the public at large – were left to wonder how the authorities had failed to capture the drone pilot or shoot down or disable the craft. Every time the airport hoped to get flights going again, up would pop the drone within the one kilometre no-fly zone, preventing passenger jets from taking off. In all, more than 760 flights were grounded.

"This feels like a kidnapping," said Andrea Tortora del Lacorte, 25, an Italian lawyer who had been stuck at Gatwick's north terminal from 5.30am Thursday until late last night. He was trying to get to Naples for Christmas and was not alone in feeling despondent. He would end up paying an extra £350 ($622) for a flight home from Luton airport and £70 in taxis to get there. 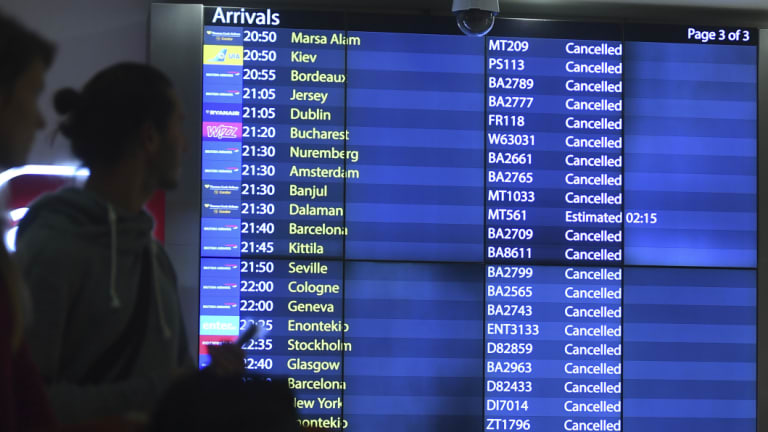 People look at the arrivals board at Gatwick airport, as the airport remains closed after drones were spotted over the airfield on WEdnesday.Credit:PA/AP

The crisis had begun the night before (Wednesday local time) at 9.03pm when airport staff spotted at least one drone hovering above the runway. Gatwick went into shutdown, with passengers forced to sleep in the terminals. Planes due to land at Gatwick were diverted across Britain and as far afield as Paris, Bordeaux and Amsterdam.

In the next three hours, the drone was seen at least five more times. With a typical battery life that allows a flying time of 30 minutes, its pilot was able to launch it, land it, change batteries and repeat the process without getting caught. By 3am on Thursday, Gatwick was confident it had seen off the threat and reopened its runway.

The optimism didn't last long. Within three-quarters of an hour, the drone was buzzing again, violating airspace and prompting aircraft to be grounded again. The runway would not open again.

Travellers leaving on Thursday, they piled in, hopeful of getting away and presumably confident a thing as small as a drone could not stop them. But the Government was starting to worry. 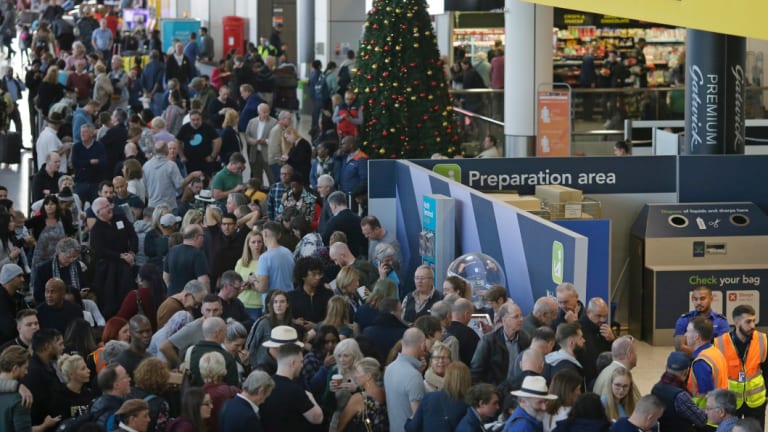 People wait near the departures gate at Gatwick airport on Thursday.Credit:AP

Aviation Minister Baroness Sugg went on radio warning the drone pilot he faced five years in jail when caught. Woodroofe went on television but had to declare: "There is a drone on my airfield as we speak." It was almost as if he was being taunted.

Passengers were becoming more upset as the clock ticked. At Stansted, a Gatwick flight re-routed there had been stuck on its runway for four hours, the passengers in limbo.

One passenger on a flight from Cape Verde was so desperate he allegedly opened the door while a fellow passenger shouted, "I'm a terrorist" to gain police attention and ensure the plane would be evacuated.

Elsewhere, Mary Isokariari, stuck at Cardiff airport, paid £850 for an overnight taxi to get her back to London. "We just wanted to get home," she said. 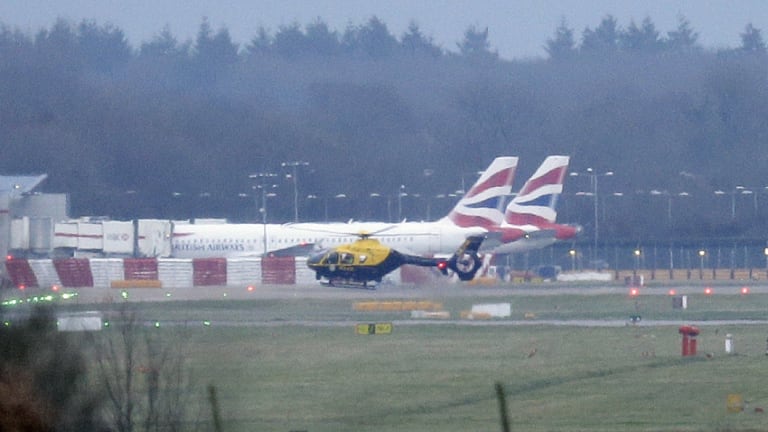 A police helicopter flies over Gatwick Airport on Thursday. Police played cat and mouse with the drone.Credit:AP

Police set up snipers on the Gatwick runway, some armed with what appeared to be shotguns that could – like shooting a clay pigeon – have a wider target area. An air force helicopter circled, but police were barred from taking pot shots at the drone for fear of a stray bullet hitting bystanders. Meanwhile, police patrolled the country lanes close to the airport, hunting in vain for the drone pilot. At times, the action bordered on farce as police units were scrambled to the latest sighting.

Officers resorted to standing on the roof of the airport police station by early afternoon, deploying a hi-tech drone detection system.

But there were serious questions about why outside companies with serious expertise had seemingly not been called in sooner. One company, Metis Aerospace, which developed a drone detection kit successfully tested at Southend airport in May, was only called into action on Thursday morning.

The sophisticated kit, that takes just a few minutes to set up, can detect not only the drone but its operator on the ground within seconds. The company's technical team was stuck in traffic trying to get from its base in Lincolnshire to the Sussex airport. One source was dismayed the company had not been called earlier. Companies that can deploy jamming devices are also thought to have been called in only toward the end of the morning. 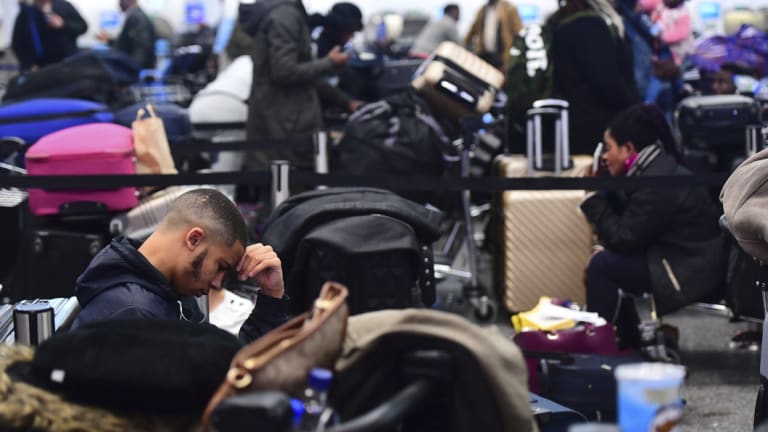 The drone incident happened during one of the busiest times of the year, stranding or delaying tens of thousands of Christmas-season travellers.Credit:PA/AP

Gatwick would offer a new time to reopen and then push that back with every new sighting. By the afternoon, passengers were recounting their own horror stories.

In the terminals, passengers used coats as makeshift blankets and queued for details of new flights or else made their way to hotels around the airport. Some gave up on Christmas plans altogether. Mamosta Abdulla was trying to get to his father's memorial service but was resigned to missing it.

"We are in Iraq with bombs going off nearby and the plane still lands. But here some drones have shut down the airport," he complained.

Andri Kyprianou, from Cyprus, who had been visiting London, said: "I haven't slept since yesterday morning. We are very tired. It's freezing, we are cold, having to wear all of these coats for extra blankets.

"There were pregnant women, one of them was sleeping on the floor. There were people with small babies in here overnight. We saw disabled people on chairs."

By 3pm Thursday, with local police clearly struggling, the Ministry of Defence announced it had been called in to offer assistance.

What that help was the military would not say, but Lord West, the former First Sea Lord and former security adviser to former prime minister Gordon Brown, told the House of Lords its armoury included jamming devices and systems to override drone control systems.

By the early afternoon, Gatwick's coffee shops were running out of food, while passengers scrambled for hotel rooms.

Tempers at the Holiday Inn on Gatwick's perimeter road were beginning to fray.

"If I got my hands on who did this I'd string them up myself. It's unbelievable they still haven't got him," said Tom Horne, 63, from Suffolk, waiting to fly to Abu Dhabi with his wife Jan, adding: "It makes this country look pathetic." He wasn't alone in thinking that.