Nearly two in ten over-70s from Pakistani and Bangladeshi backgrounds have not turned up for their second Covid vaccine dose compared to less than four per cent of white adults, official data revealed today.

Office for National Statistics (ONS) figures showed 17.6 per cent of people from Pakistani backgrounds did not get their second dose by May 9, more than 11 weeks after their first jab. For Bangladeshi people it was 17.3 per cent.

This was despite these groups being more willing to get first doses, with between 80 and 83 per cent of them coming forward for the first dose.

ONS data shows elderly Black African people living in England were least likely to turn up for their first jab, with 67.4 per cent attending appointments. Sixteen per cent of these individuals did not book to get their second dose.

When broken down by region, eight of the 10 councils where people were least likely to get a second dose were in London. They were Newham, Tower Hamlets, Brent, Lambeth, Southwark, Hackney, Barking and Dagenham, and Haringey.

Scientists say it is essential to get both doses of the jab because the second turbo-charges the immune system to improve protection against hospitalisation and death from the virus. Experts say this is especially important with the now-dominant Indian variant, which makes first doses less effective.

The national drive was expanded to under-70s on February 21, after ministers said everyone in older age categories had been offered at least one dose. The ONS data considered all over-70s who had got their first jab after March 15.

More than 40million Britons — or three in four adults — have got one dose of the Covid vaccine to date, and 27.6million had got a second dose — or one in two adults. 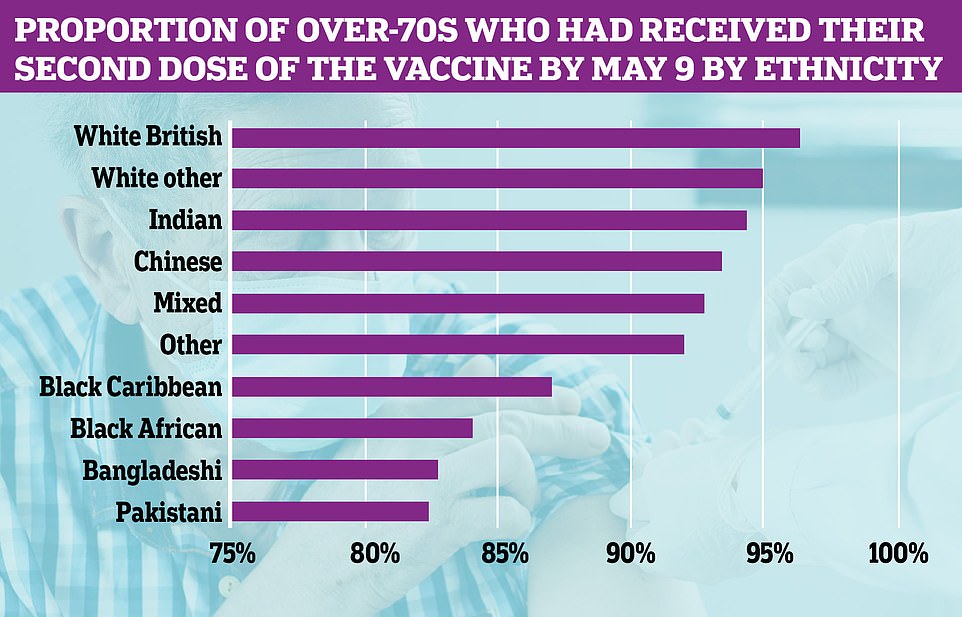 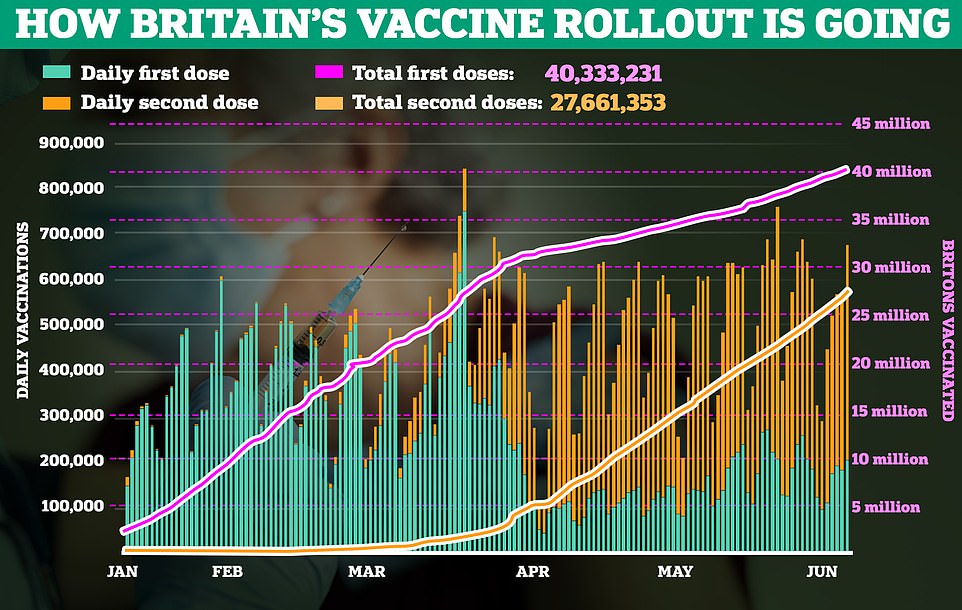 The ONS data was based on details in the NHS-run National Immunisation Management System (NIMS), a national programme which holds information on people’s ethnicity and what vaccines they have received.

Statisticians said it allowed them to sift through figures to identify ethnic groups with lower first and second dose uptake rates.

But they warned it did not cover the entire population because it excluded those who did not take part in the 2011 Census. Data from this year’s Census is yet to be added to the system.

Two doses of AstraZeneca’s coronavirus vaccine are up to 90 per cent effective at stopping symptoms of Covid, according to official estimates.

Public Health England’s analysis of real-world data published last month found the British-made jab was just as effective as a double-dose of the Pfizer vaccine.

No10’s vaccine minister Nadhim Zahawi hailed the data, saying it highlighted the ‘incredible’ importance of getting both doses of the jab.

He added: ‘There is no better weapon to send this virus into retreat than our life-saving vaccines.

‘A second dose is vital to ensure you have the strongest possible protection so we can return to normality and get back to the things we love.’

Independent experts also praised the findings, describing the AstraZeneca vaccine as a ‘key weapon’ in the global fight against the pandemic.

Dr Michael Head, senior research fellow in global health at the University of Southampton, said: ‘It is reassuring to see the data from both the Pfizer and Oxford AstraZeneca vaccines.

‘They are essentially comparable in terms of effectiveness against symptomatic disease, which is very high after two doses.

‘Oxford AstraZeneca really is an excellent vaccine. It will be a key weapon in the global rollout, and a key tool for use in lower income countries.’

ONS figures showed people who identified as Pakistani were least likely to turn up for a second dose – 5,900 people in this group did not get a second dose out of 33,300 who got a first dose.

The NHS has repeatedly urged Britons to make sure they get their second dose. Britain brought forward doses for over-50s last month amid an outbreak of the Indian variant.

Dr Emily Lawson, the health service’s lead for the Covid vaccine programme, said: ‘If you are contacted to bring forward your second dose appointment I would urge you to do this as soon as possible, as getting both doses is what will give everyone the maximum possible protection against Covid.

‘The vaccine is our most effective weapon against the virus and there has never been a more important time to get protected so if you’re contacted by the NHS, book your jab or bring forward your second dose.’

After getting his second dose of the AstraZeneca vaccine last week, Boris Johnson said: ‘Second jab done. When it’s your turn, get the jab.’

Vaccines Minister Nadhim Zahawi has previously said: ‘When you’re called to take up your second dose, do not delay booking in that appointment so you can get as much protection as possible as soon as you can.’

A PHE analysis of real-world data published last month found AstraZeneca’s shot is more effective at blocking deaths and hospitalisations after a second dose and was just as effective as Pfizer’s vaccine.

Rigorous studies of the jab to get it approved showed it was 76 per cent effective at blocking symptomatic Covid.

But the study confirmed the efficacy in the real-world, where jabs are normally slightly less effective than in carefully controlled studies.

PHE warned their figures were primarily based on older adults, who were first in line to get both doses because they are most at risk of hospitalisation and death if they catch the virus.

It gave no figures for how well it prevented hospitalisation or death — but academic trials showed two doses had an efficacy rate of up to 100 per cent.