The idea of a single national scheme to give the disabled more dignity and control has enjoyed bipartisan support for the past decade, but that consensus appears to be fraying over changes now under active contemplation by the federal government.

The National Disability Insurance Scheme, which started in 2013, is a single national agency that has taken on the job of funding the services each disabled person needs, combining the myriad local, state and federal bodies. A planner assesses what services are reasonable and necessary for each person and the government funds it, but the individual can choose their own provider. 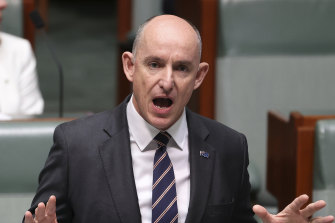 The NDIS now covers more than 400,000 people with another 100,000 in the process of transferring from other forms of support (or no support).

However, Disabilities Minister Stuart Robert has flagged major changes, arguing the current system lacks consistent national guidelines, resulting in marked differences between country and city in levels of support. He has also questioned some categories of funding, especially a case where the NDIS was asked to pay for the services of sex workers for a person with disabilities.

He wants to replace the current system of determining a plan for each customer in conjunction with their doctors and other health professionals, with a standardised three-hour assessment.

The Age on Friday reported on draft legislation which would make explicit that people refusing to submit to these tests will lose access to funding. It also appears to exclude from the NDIS categories of people who are currently eligible, including those with acquired brain disorders and fetal alcohol syndrome.

Disability groups say the changes are primarily about cutting costs rather than helping the disabled. They say a three-hour assessment based on cookie-cutter nationwide criteria is not the best way to develop an individual plan. They argue that Mr Robert is playing politics by raising the emotive case of funding for sex workers. He is also over-simplifying the issue of the variation between regions, which they say can be explained by the fact that people with the most serious and costly disabilities live in major centres where they can receive help.

Once the government releases the final draft of the legislation, it will be easier to make a judgment on what it has in mind, but Mr Robert’s approach to developing the new legislation so far seems too secretive and confrontational.

Certainly, it is important to get value for money and fairness in the system but he has failed to bring the community and other tiers of government into the discussions about how to achieve that. He has not, for instance, involved them in pilot trials of the new independent assessments.

NSW Disabilities Minister Gareth Ward wrote to Mr Robert recently urging him to consider a “consultative approach” on changes to support levels. He said the aim should be to achieve consensus on what level of support is fair and reasonable for each disabled person.

A six-year review of the NDIS by public servant David Tune last year gave tentative backing to some of the government’s plans for change but also said without broad support they would be perceived as “a tool designed to cut supports from participants”.

The NDIS has been built on the idea of putting disabled people at the centre of decision making but the current process risks leaving them on the sidelines and causing unnecessary pain to the most vulnerable.

Mr Robert should go back to the drawing board and begin serious consultation with representative groups and the states. To push ahead without that would undo much of the hard-earned support for the NDIS since its inception.

The Age’s editor, Gay Alcorn, writes an exclusive newsletter for subscribers on the week’s most important stories and issues. Sign up here to receive it every Friday.