Washington: Democrats are within reach of seizing control of the US Senate and dramatically boosting Joe Biden's hopes of implementing his policy agenda after knife-edge results in two crucial Senate contests in Georgia.

With 97 per cent of the vote counted just before midnight in the US, Democratic candidate Raphael Warnock was leading Republican Senator Kelly Loeffler by around 35,000 votes or one percentage point. 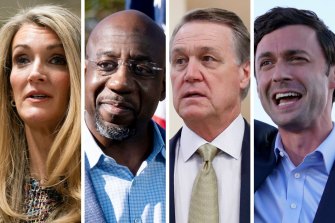 In the other Senate run-off contest, Democrat Jon Ossoff was tied with Republican Senator David Perdue on 50 per cent of the vote each.

Most of the remaining votes are in Democrat-leaning areas around Atlanta, buoying progressives' hopes that they will triumph in both contests.

If Democrats win both Senate seats they will control the White House, the House of Representatives and the Senate.

Democratic victories would defy historical voting trends in Georgia and spark a round of blood-letting among Republicans over whether President Donald Trump's baseless claims of election fraud backfired and cost the party their cherished Senate majority.

The final days of the run-off campaigns were overshadowed by revelations that Trump had pressured Georgia's top election official to overturn Biden's victory in the state.

Trump's false insistence that he still he had a realistic claim of winning a second term also complicated the Republican candidates' efforts to portray themselves as the final line of defence against total Democratic control in Washington.

Georgia elections official Gabriel Sterling, a Republican, said that Trump would be to blame if either or both the Republican candidates lost their seats.

"It will fall squarely on the shoulders of President Trump and his actions since November 3rd," he told CNN on Wednesday (AEDT) as the votes were being counted.

As the results came in Trump again insinuated, without any evidence, that fraud had occurred by tweeting: "Looks like they are setting up a big 'voter dump' against the Republican candidates. Waiting to see how many votes they need?"

If Warnock and Ossoff win, the Senate will be tied 50-50 between Democrats and Republicans with Vice-President-elect Kamala Harris able to cast a tie-breaking vote. 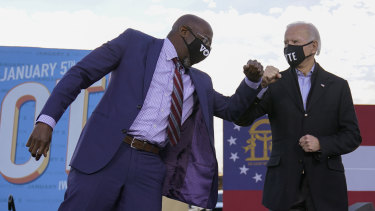 Warnock, 51, is a prominent pastor from Atlanta who leads a predominantly black church where civil rights leader Martin Luther King Junior served as senior pastor in the 1960s.

Ossoff, 33, a former documentary filmmaker, would become the youngest person elected to the US Senate in 40 years.

Ossoff's mother, Heather Fenton, was born and raised in Sydney before moving the US in her early twenties and settling in the Atlanta area.

Democratic control of the Senate would offer Biden a much brighter prospect of achieving his legislative priorities on climate change action, healthcare and tackling the coronavirus.

While campaigning in Georgia this week Biden vowed that emergency stimulus cheques of $US2000 ($2574) would soon flow to most Americans if Warnock and Ossoff won their Senate contests.

It would also make it easier for Biden to win Senate confirmation for his cabinet appointees and selections for key judicial posts, such as Supreme Court nominees.

Democrats had not won a Senate race in Georgia, regarded as a reliable Republican state until recently, for the past 20 years.

Since 1992, Democrats in Georgia had only once performed better in runoff elections than they did in the November general election.

Runoff elections are held in the state when neither candidate wins over 50 per cent of the vote in the first round of voting.