The Senate Commerce Committee on Thursday unanimously voted to approve a plan to subpoena chief executives of Twitter, Alphabet’s Google and Facebook for a hearing on a prized legal immunity enjoyed by internet companies.

The trio – Mark Zuckerberg of Facebook, Jack Dorsey of Twitter, and Sundar Pichai of Google – will legally have to attend.

The hearing is likely to discuss reforming Section 230 of the Communications Decency Act, which offers tech companies protection from liability over content posted by users.

The committee, chaired by Republican Senator Roger Wicker, had originally asked the executives to come on Oct. 1 on a voluntary basis and was ready to issue subpoenas last week.

On Thursday, he said Section 230’s ‘sweeping liability protections’ are stifling diversity of political discourse on the internet.

‘After extending an invite to these executives, I regret that they have again declined to participate and answer questions about issues that are so visible and urgent to the American people,’ Wicker said.

The panel’s top Democrat Maria Cantwell, who opposed the move last week saying she was against using ‘the committee’s serious subpoena power for a partisan effort 40 days before an election,’ changed her mind and voted to approve the move. 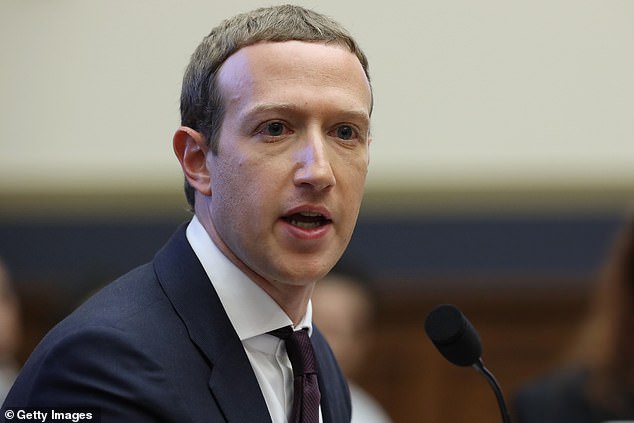 in the spotlight: Mark Zuckerberg is one of the three big tech CEOs hit by the subpoena

Republican President Donald Trump has made holding tech companies accountable for allegedly stifling conservative voices a theme of his administration. As a result, calls for a reform of Section 230 have been intensifying ahead of the elections, but there is little chance of approval by Congress this year.

Last week Trump met with nine Republican state attorneys general to discuss the fate of Section 230 after the Justice Department unveiled a legislative proposal aimed at reforming the law.

The chief executives of Google, Facebook, Apple Inc and Amazon.com Inc recently testified before the House of Representatives Judiciary Committee’s antitrust panel. The panel, which is investigating how the companies’ practices hurt rivals, is expected to release its report as early as next Monday.

SECTION 230: THE LAW AT CENTER OF BIG TECH SENATE SHOWDOWN

Under the U.S. law, internet companies are generally exempt from liability for the material users post on their networks. Section 230 of the 1996 Communications Decency Act – itself part of a broader telecom law – provides a legal ‘safe harbor’ for internet companies.

But Republicans increasingly argue that Twitter, Facebook and other social media platforms have abused that protection and should lose their immunity – or at least have to earn it by satisfying requirements set by the government.

Section 230 probably can’t be easily dismantled. But if it was, the internet as we know it might cease to exist.

If a news site falsely calls you a swindler, you can sue the publisher for libel. But if someone posts that on Facebook, you can’t sue the company – just the person who posted it.

That’s thanks to Section 230, which states that ‘no provider or user of an interactive computer service shall be treated as the publisher or speaker of any information provided by another information content provider.’

That legal phrase shields companies that can host trillions of messages from being sued into oblivion by anyone who feels wronged by something someone else has posted – whether their complaint is legitimate or not.

Section 230 also allows social platforms to moderate their services by removing posts that, for instance, are obscene or violate the services’ own standards, so long as they are acting in ‘good faith.’

Where did Section 230 come from?

The measure’s history dates back to the 1950s, when bookstore owners were being held liable for selling books containing ‘obscenity,’ which is not protected by the First Amendment. One case eventually made it to the Supreme Court, which held that it created a ‘chilling effect’ to hold someone liable for someone else´s content.

That meant plaintiffs had to prove that bookstore owners knew they were selling obscene books, said Jeff Kosseff, the author of ‘The Twenty-Six Words That Created the Internet,’ a book about Section 230.

Fast-forward a few decades to when the commercial internet was taking off with services like CompuServe and Prodigy. Both offered online forums, but CompuServe chose not to moderate its, while Prodigy, seeking a family-friendly image, did.

CompuServe was sued over that, and the case was dismissed. Prodigy, however, got in trouble. The judge in their case ruled that ‘they exercised editorial control – so you’re more like a newspaper than a newsstand,’ Kosseff said.

That didn’t sit well with politicians, who worried that outcome would discourage newly forming internet companies from moderating at all. And Section 230 was born.

What happens if Section 230 is limited or goes away?

‘I don´t think any of the social media companies would exist in their current forms without Section 230,’ Kosseff said. ‘They have based their business models on being large platforms for user content.’

There are two possible outcomes. Platforms might get more cautious, as Craigslist did following the 2018 passage of a sex-trafficking law that carved out an exception to Section 230 for material that ‘promotes or facilitates prostitution.’ Craigslist quickly removed its ‘personals’ section altogether, which wasn’t intended to facilitate sex work. But the company didn´t want to take any chances.

This outcome could actually hurt none other than the president himself, who routinely attacks private figures, entertains conspiracy theories and accuses others of crimes.

‘If platforms were not immune under the law, then they would not risk the legal liability that could come with hosting Donald Trump´s lies, defamation, and threats,’ said Kate Ruane, senior legislative counsel for the American Civil Liberties Union.

Another possibility: Facebook, Twitter and other platforms could abandon moderation altogether and let the lower common denominator prevail.

Such unmonitored services could easily end up dominated by trolls, like 8chan, which is infamous for graphic and extremist content, said Santa Clara University law professor Eric Goldman. Undoing Section 230 would be an ‘an existential threat to the internet,’ he said.