There was a sombre mood at Simone Callahan’s house early Sunday morning as she and her children made final preparations to farewell late cricket icon, Shane Warne.

His son Jackson, 22, proved yet again that he was prepared to step up for his family in his father’s absence as he led his sisters Brooke, 24, and Summer, 20, to a waiting chauffeur and liaised with security at the Melbourne park chosen for Warne’s funeral.

Jackson looked a spitting image of his late father with his long blond hair and tailored black suit as he clutched a golf club and ushered his sisters into the car.

Warne was a keen golfer, particularly after he retired from cricket, and would often travel the world to play in friendly and competitive matches with his mates.

Brooke, who wore a calf-length, chiffon black dress, looking downcast as she stepped into the waiting car behind her brother. 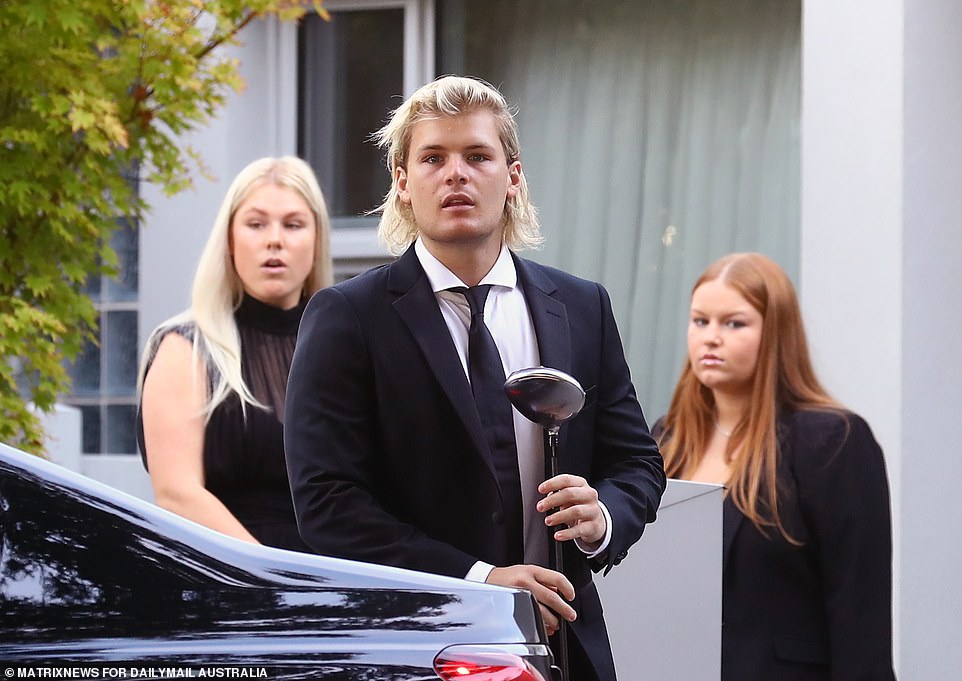 There was a sombre mood at Simone Callahan’s house early Sunday morning as she and her children made final preparations to farewell late cricket icon, Shane Warne 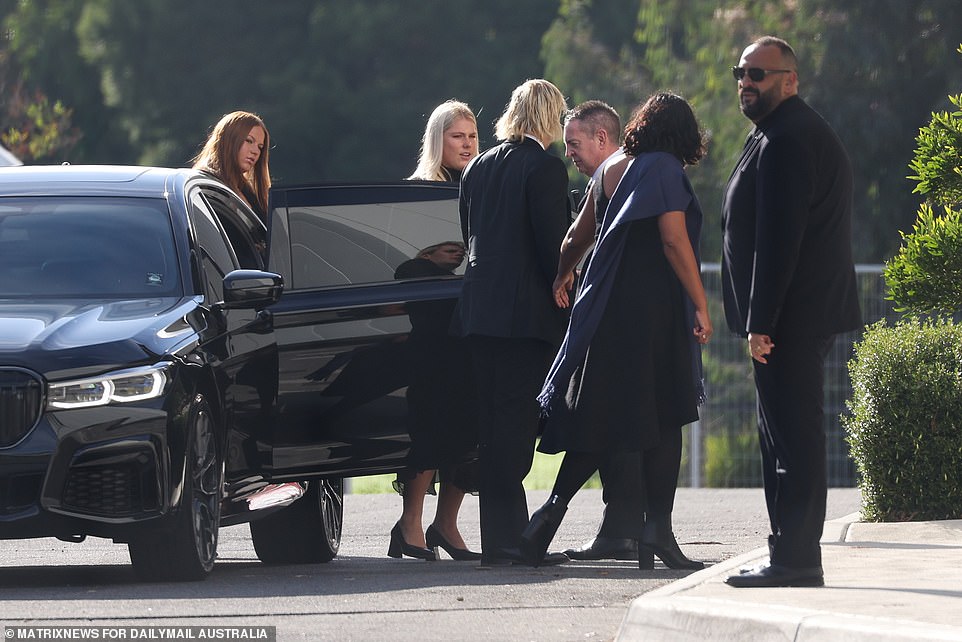 Brooke, Jackson and Summer Warne arrive at St Kilda Football Club and are greeted by other mourners 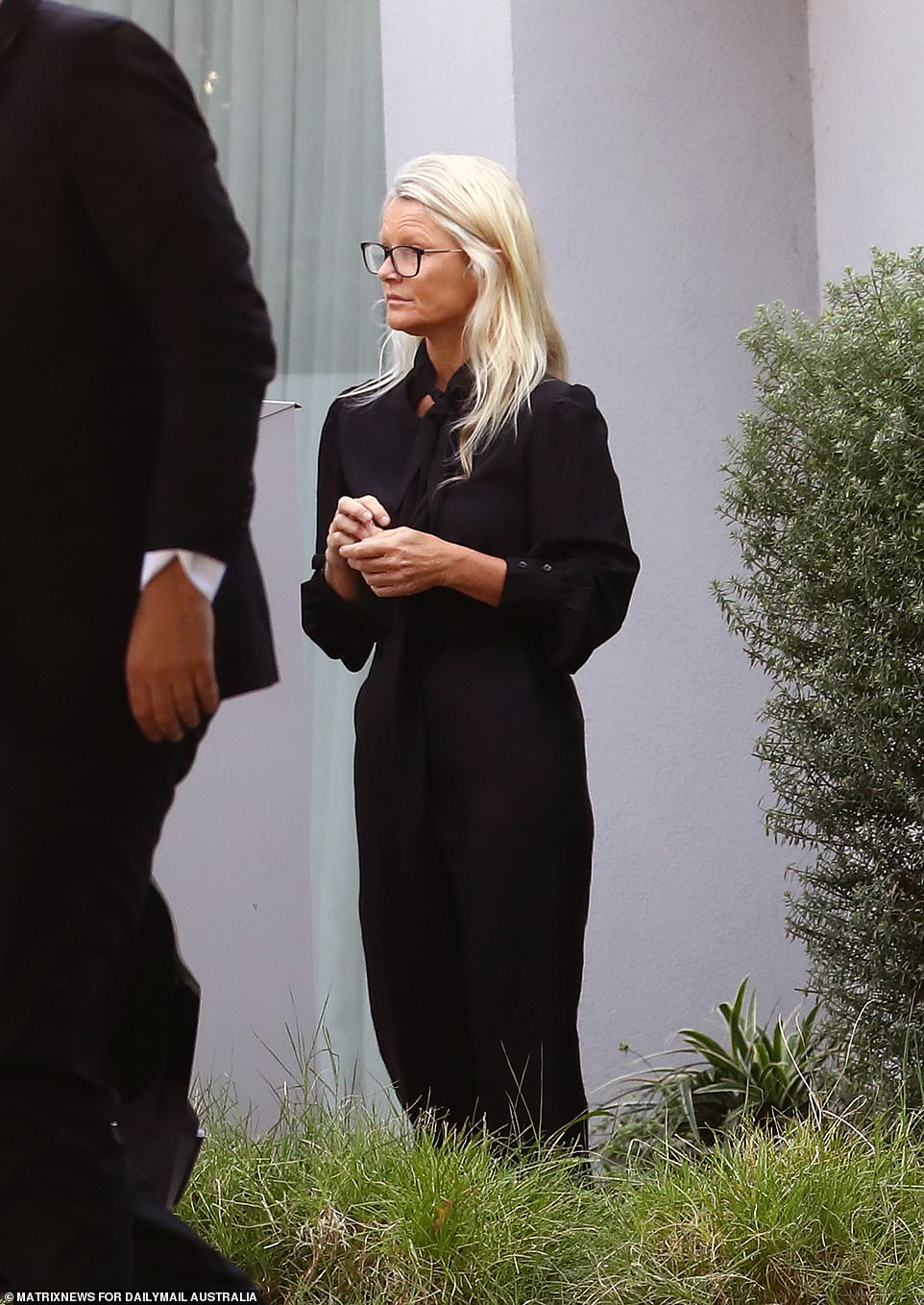 The trio’s mother, Warne’s ex-wife Simone (pictured), left her house only briefly to say goodbye to her children, who departed well before the private service began at 11am. She slipped into the service via a back door

The trio’s mother, Warne’s ex-wife Simone, left her house only briefly to say goodbye to her children, who departed well before the private service began at 11am.

Meanwhile at the nearby home of Warne’s parents Bridgette and Keith, his mother went for an early morning stroll with a female friend ahead of her son’s funeral.

Police officers and security guards are stationed around the perimeter of the St Kilda Football Club in order to protect grieving loved ones. About 80 of Warne’s nearest and dearest are expected to attend.

Guests began quietly filing in to the clubhouse about 10.30am on Sunday, while Simone slipped in via a back entrance and greeted immediate family in a separate room ahead of the service.

The 52-year-old’s friend Eddie McGuire gave a live cross to Channel 9 before heading inside as a guest. He spoke of Warne’s jovial and happy-go-lucky nature, noting he was a ‘friend of the footy show’ and loved his life.

‘The reason why he was so loved is because he was fallible, he was Superman. He did the things you dreamt of doing as a kid,’ McGuire said in a moving tribute out the front of the service. 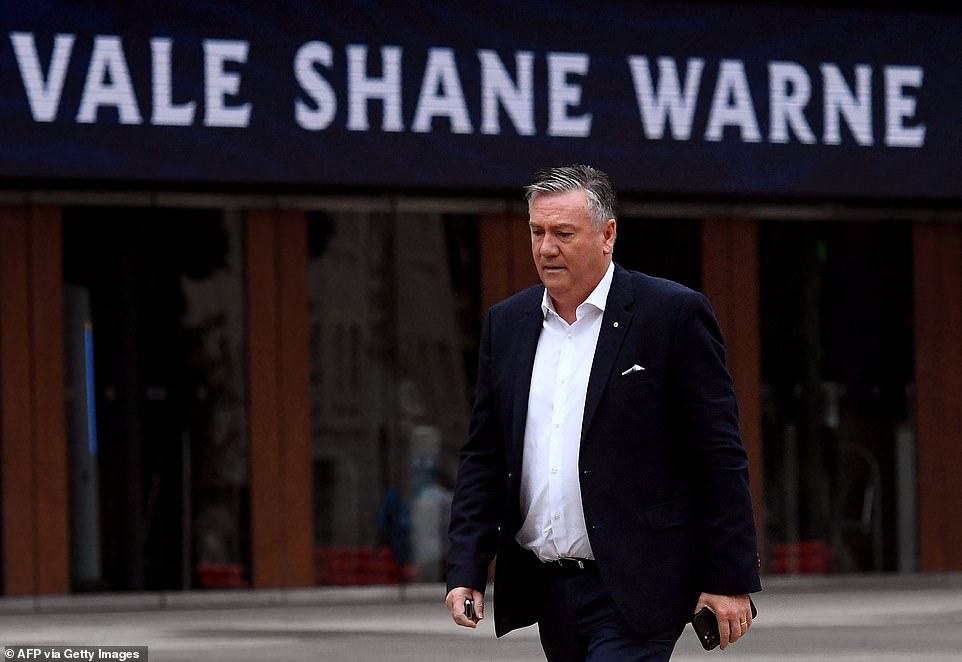 The 52-year-old’s friend Eddie McGuire gave a live cross to Channel 9 before heading inside as a guest. He spoke of Warne’s jovial and happy-go-lucky nature, noting he was a ‘friend of the footy show’ and loved his work

‘The magic part about Shane Warne was that he sprinkled his gold dust everywhere he went.’

McGuire said it was fitting the service was held at the St Kilda Football Club, given Warne’s passion for the team and the sport.

‘He could walk with kings but never forgot those who walked around the streets of Melbourne.’

Every guest at the intimate service will receive a Saints scarf in Warne’s honour.

Young fans in AFL jerseys and their parents watched on through mesh gates as friends and family made their way through the open car park and into the building for the funeral.

The Moorabbin park, which is normally open and available for kids to play on when there aren’t games scheduled, has become a fortress surrounded by security in blue uniforms and patrolling police officers.

There will be an outdoor element of the send off later on Sunday which is expected to include a photo slideshow. It’s understood this part of the service will be filmed so his fans can watch on later. 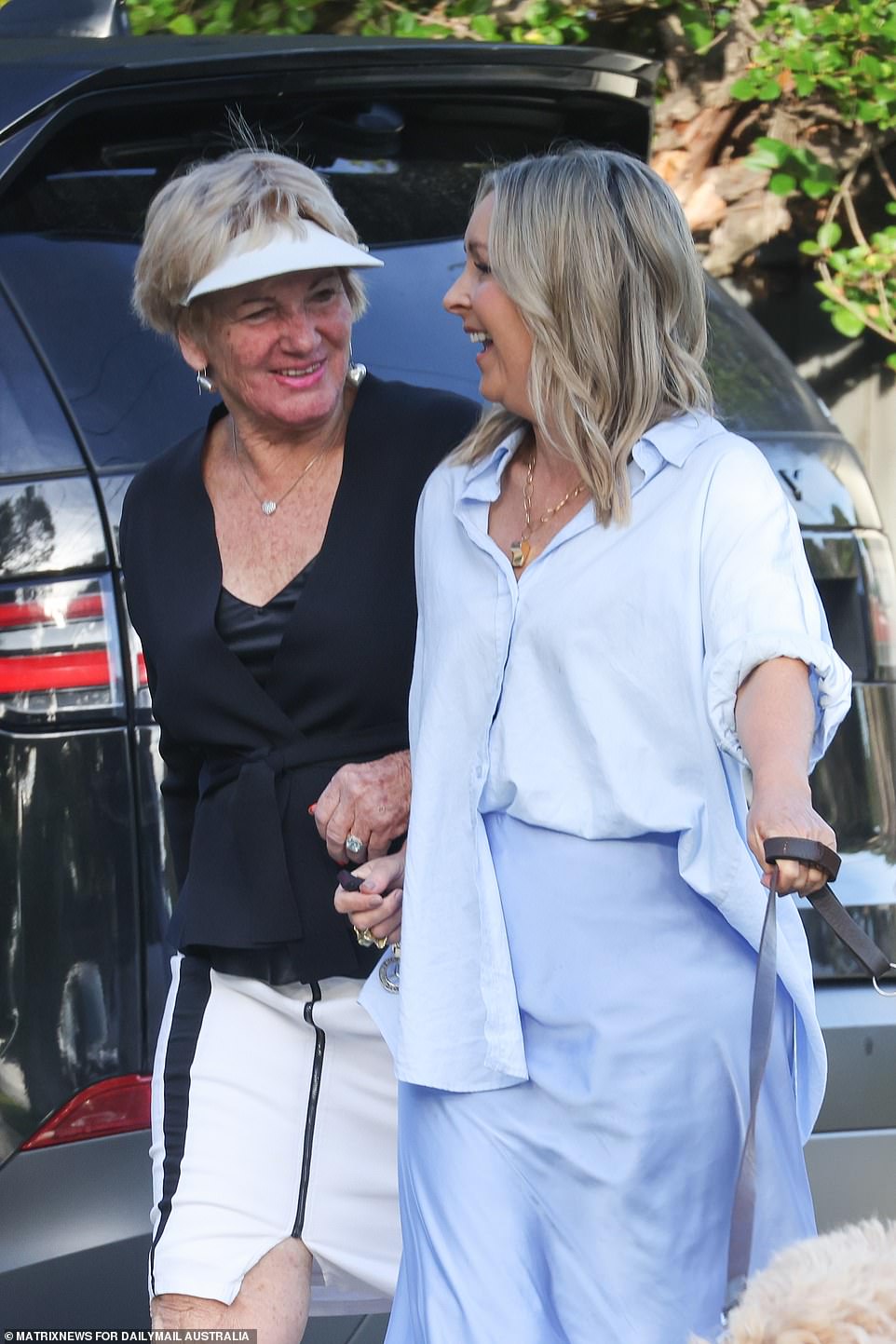 At the nearby home of Warne’s parents Bridgette and Keith, his mother (left) went for an early morning stroll with a female friend in the brisk 17C Sunday sun 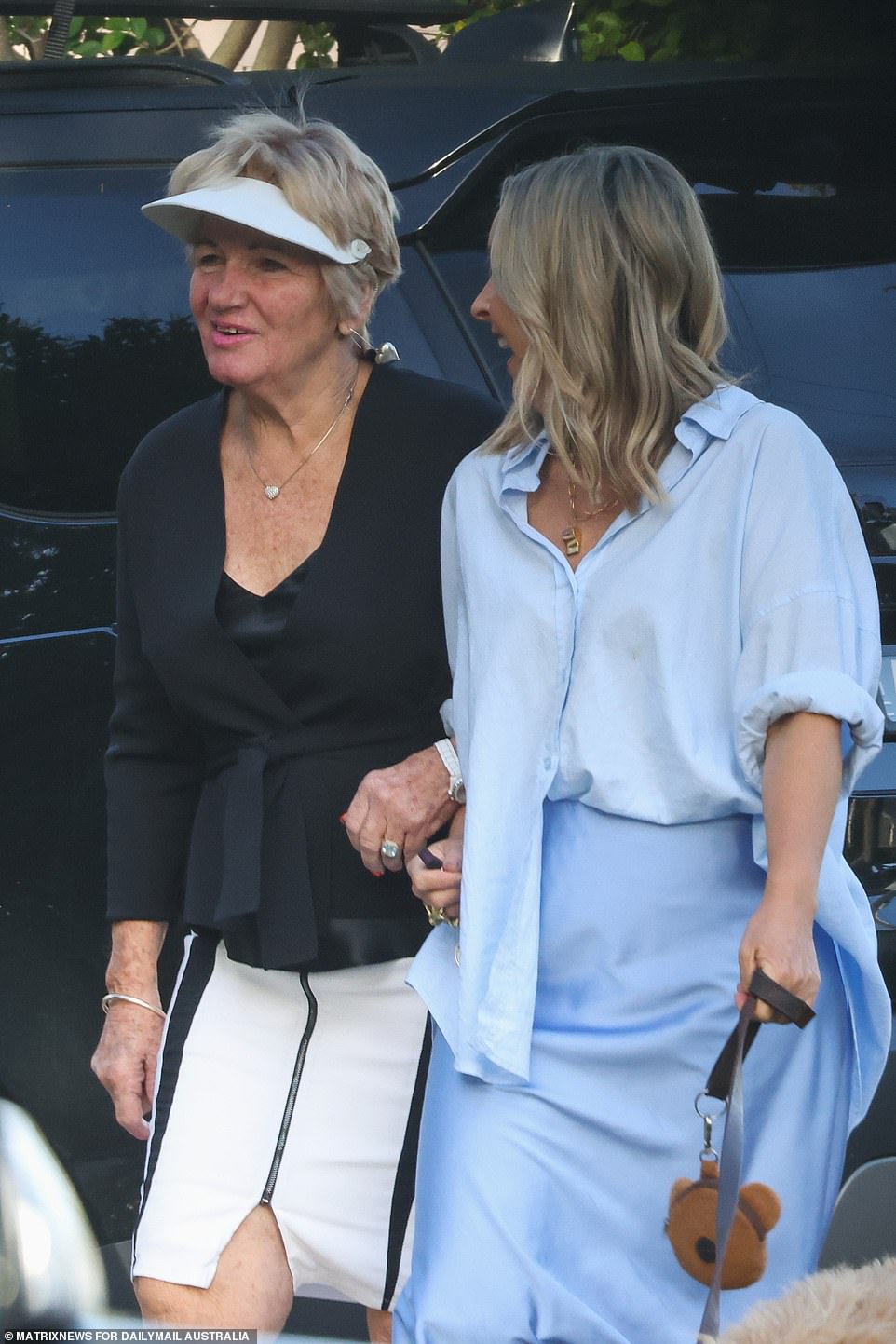 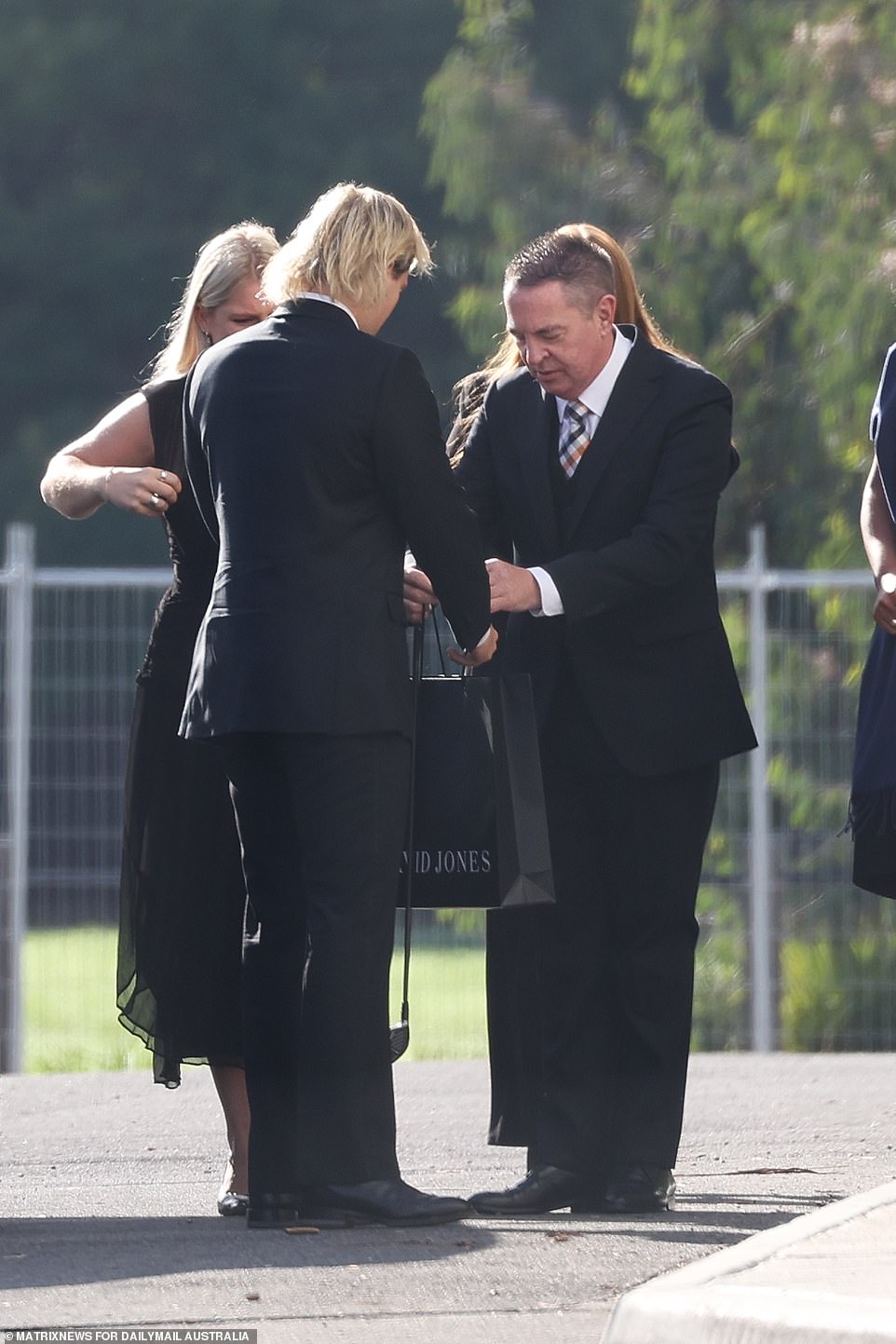 A who’s who of Melbourne’s sport scene will be in attendance and Eddie McGuire is expected to host the funeral.

‘I’m going and I’m humbled to be invited. Like all funerals I think it’s going to be a sombre affair and emotional,’ Newman said.

‘This was extremely shocking to everyone who knew of Shane and to those that knew him well.’

Close friends from the cricketing community will pay their respect, including former England captain Michael Vaughan who has flown in for the private funeral.

Prime Minister Scott Morrison has confirmed he will attend the public service – the night after the Federal Budget is handed down. 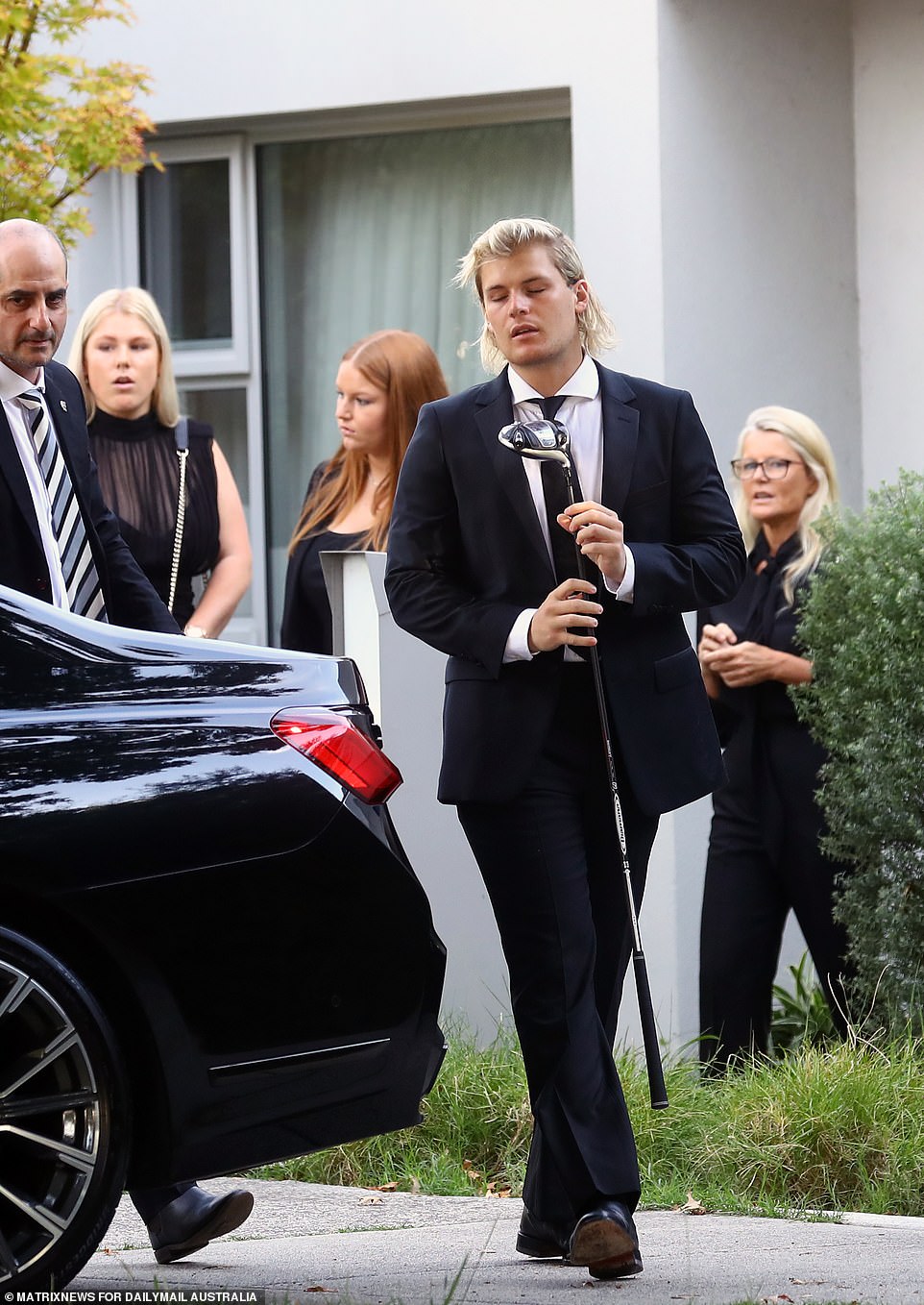 Jackson was responsible for carrying a golf club presumably owned by his father, who was an avid golfer before his tragic death. He led the way as his sisters and mother followed him out of their home 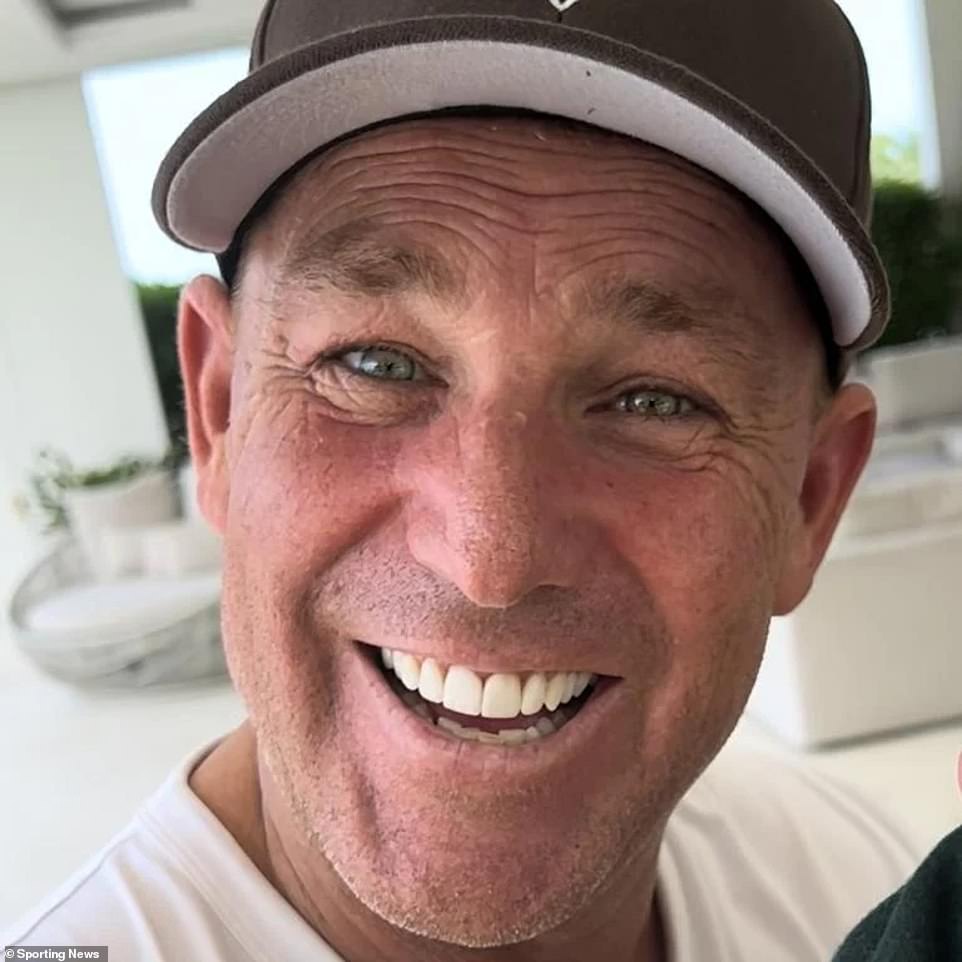 Coldplay frontman Chris Martin and singer Ed Sheeran are expected to send video messages to be played on big screens.

Warne’s former fiancée, actress Elizabeth Hurley was expected to fly out from the UK but revealed overnight she would not be able to attend.

The state memorial will be ticketed and live-streamed for those who can’t be there in person, with tickets to be made available to the public soon.

People wanting to attend the event will be able to enter a public ballot for one of 50,000 tickets. More tickets may become available, depending on demand.

Warne was found unresponsive in his luxury villa at the Samujana resort on Koh Samui, Thailand, about 5pm on Friday, March 4 after suffering a heart attack.

His close friend Andrew Neophitou performed CPR on Warne for up to 20 minutes before first responders arrived and took over, but could not save him. 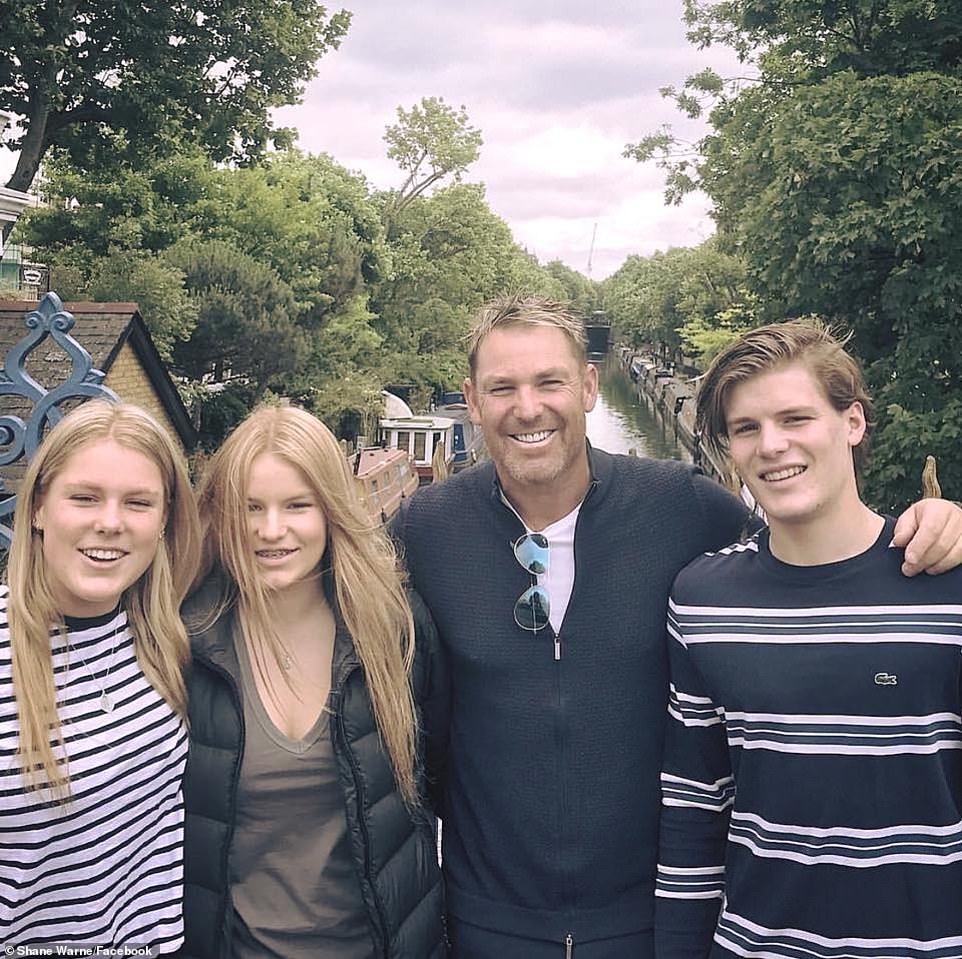 Shane Warne’s children Brooke, Summer and Jackson (pictured with their dad in London) have shared heartwarming tributes to the cricketing legend and put on a united front in the weeks since his tragic death 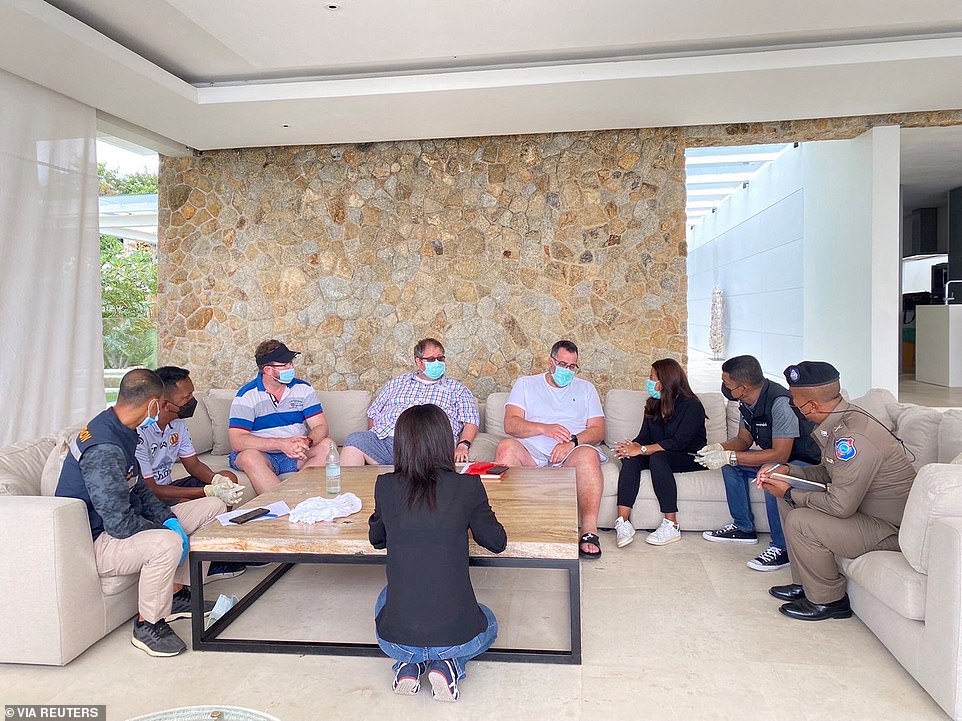 Police investigators are pictured speaking with Warne’s friends after his sudden death at his villa on March 4. A post-mortem examination revealed Warne had suffered a heart attack and there were no suspicious circumstances 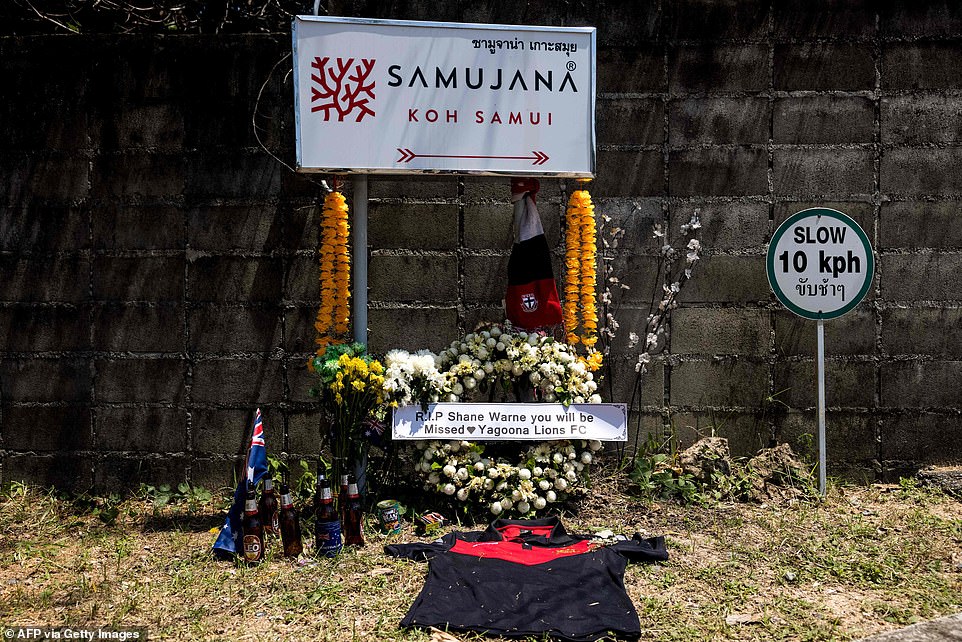 Warne will be farewelled in a state funeral at the Melbourne Cricket Ground on March 30. Tributes to Warne are pictured outside Samujana Villas on March 7

The night of the 4th of March 2022 is when a never-ending nightmare began for our family, for that is the date we lost our much loved and admired son, father, brother and Uncle, ‘Shane Keith Warne’ a tragedy we will never come to terms with.

To find words to adequately express our sadness is an impossible task for us and looking to a future without Shane is inconceivable, hopefully the mountain of happy memories we all have will help us cope with our ongoing grief.

Over the past few days Shane has been honoured with the family being offered a state memorial for Shane by Premier Dan Andrews which the family have gratefully accepted.

The Premier and Minister for Sport and Major Events, Martin Pakula have also advised that the Great Southern Stand at the Melbourne Cricket Ground will be renamed the S.K Warne Stand. We sincerely offer our thanks to the state government and the MCG trust for this honour.

We would also like to acknowledge the support of Prime Minister Scott Morrison for his kind words both personally and on behalf of the country, as everyone knows Shane was an extremely proud Victorian and Australian.

Brigitte and I are most grateful for the many messages of love and support received over the past few days and thank one and all for their kind words of comfort.

We also wish to acknowledge and thank those members of the media who are honouring our request to respect our family’s privacy and who will continue to do so.

To my brother, my best friend, to my Dad, I love you so much. I don’t think anything is ever going to fill the void you have left in my heart. Sitting at the poker table, walking around the golf course, watching the Saints and eating pizza is never going to be the same.

But I know all you ever wanted for me is to be happy, no matter what. You just wanted me to be happy, that’s it. So that’s what I’m going to do, try and be happy. I am going to miss you so much Dad and you were truly the best father and mate anyone could’ve asked for. I love you so much Dad, see you soon.

The world has lost someone extremely special to them, who has made a positive influence on their lives and it is incredibly touching to see the outflow of emotion and the amazing tributes to him by friends, teammates, opponents and media. It has been truly heartbreaking, whilst also being sincerely appreciated.

Personally, I have lost my nemesis in all sports as a child, the person who smeared vegemite under my nose while he pinned me down giving me the typewriter, my big brother, my mate. I remember catching the train into the MCG in 1982, sitting in the front row of the Great Southern Stand with our fingers crossed the great Allan Border and Jeff Thomson would get the runs needed to beat England.

Who would have thought he would have such a huge impact at the ground in the years to come and that very stand being renamed in his honour. Amazing life. Amazing guy.

Life will forever have a massive hole in it. I will miss our fierce competition on the golf course, poker table and the sledging, seeing who could put the other on tilt first. Love you and miss you big brother.

A man places a can of beer at the base of the Shane Warne Statue outside the MCG as a tribute. (Photo by Darrian Traynor/Getty Images) (Getty)

Dad, I miss you so much already. I wish I could’ve hugged you tighter in what I didn’t know were my final moments with you.

And your final breaths were only moments away. I wish I could’ve told you that everything was going to be okay and hold your hand. You are the best Dad someone could ever ask for.

Our time was robbed. I want more holidays with you, more laughs where your smile lights up the whole room, more ‘goodnight I love you SJ, I’ll see you in the morning’, more talks about how our days were and just to feel safe when you would hug me and you would let me know how proud you are of me and how much you love me.

You haven’t died Dad, you’ve just moved to a different place, and that is in our hearts. I love you forever, until we meet again.

Dad, this doesn’t feel real and doesn’t make sense that you are not here with us anymore. It doesn’t feel right, you were taken away too soon and life is so cruel.

I will forever cherish our final memories together laughing and joking around with each other. We were happy.

We were so similar in so many ways and I always used to joke that I got your genes and about how much that annoyed me!

Well now I couldn’t be happier and prouder that I have your genes. I am lucky and will forever be so proud to call you my Dad forever. I love you to infinity and back and I will miss you forever.

‘Who bring a light so great to the world that even after they have gone the light remains.’