Rugby league star Jack de Belin has described woman he is accused of raping as attention seeking when he met her on a boozy night out in Wollongong in December 2018.

Taking to the witness box in the NSW District Court in Wollongong after almost three weeks on trial, the sidelined St George Illawarra forward told a jury he had never met his accuser before she came up and cuddled him on the dance floor of nightclub Mr Crown at about midnight on December 9. 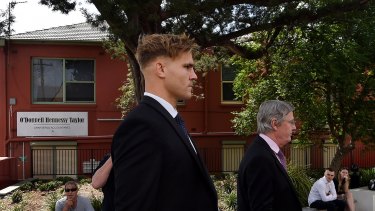 "I just said something along the lines of, 'aren’t you a little cutie'," Mr de Belin told the court on Thursday morning.

Asked by his barrister David Campbell SC whether she said or did anything in response, Mr de Belin replied that "she just giggled back".

Mr de Belin said the woman, who cannot be legally identified, was dancing around his group of male friends during their time at the bar.

"She was just very attention seeking and her dancing was dramatic and over the top," he said.

He said at one point the woman took his hat and began wearing it: "I just said, 'don't lose it please'."

Mr de Belin, 29, and his co-accused, Shellharbour Sharks player Callan Sinclair, 23, have pleaded not guilty ot several counts each of aggravated sexual assault over allegations they jointly raped the woman, then 19, in a Wollongong apartment after leaving the bar with her in the early hours of December 9.