Three plain-clothed police including a woman officer were filmed grappling with a burly thug after he threatened to shoot them when his car was stopped. 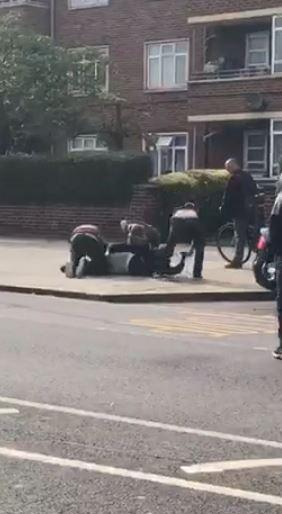 The athletically built suspect – in shorts and a dark top – overpowered the trio trying to hold him down and swung out at the woman detective before being pepper sprayed.

He struggled back into the driver’s seat of his car – despite being beaten with batons and pepper sprayed again – before finally breaking free and sprinting away.

But onlookers in hoodies in broad daylight on the busy street gathered to video the scene on their mobile phones rather than assist the cops.

And several cheered “go on son” while jeering and mocking officers as the danger man fled the scene in Manor Park, East London on Thursday. 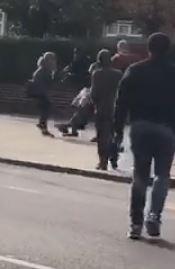 It was later revealed that the suspects’ silver Volkswagen Passat was stopped by Met’s Violent Crime Task Force amid suspicion that the two men inside were armed.

Police said the female officer suffered a broken bone in her right hand in the violent struggle and a male colleague needed surgery on ligament damage to his hand.

A local office worker who witnessed the drama said yesterday: “The police told everyone to stand back while they were grappling with the guy but obviously didn’t reckon on him being so strong. 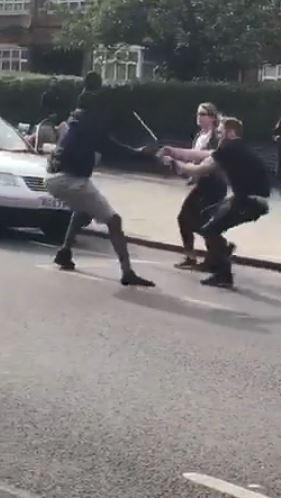 “They managed to get him on the ground at first but he got to his feet swinging at the woman cop and carried on fighting after getting blasted in the face with pepper spray.

“I thought they’d managed to handcuff him after he was beaten with batons and forced into his car but he somehow broke free and ran for it.

“He took on three police and won and a cheer went up when he got away because it looked so comical.

“It’s not a particularly rough around here but no one felt obliged to help the police out when they warned everyone to stand clear when it started. 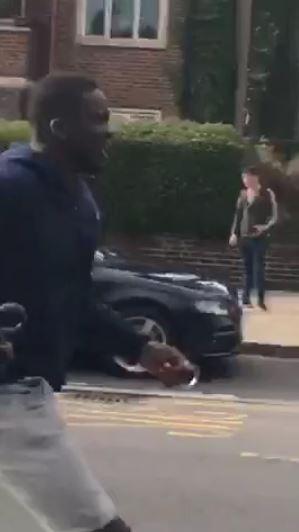 “People watching had any idea what he was supposed to have done – whether he was a terrorist or a shoplifter – but one expected him to get away.”

Police said later that they tackled the suspect fearing he was armed – however no firearms were recovered from scene.

Detective Superintendent Sean Yates of the Metropolitan Police’s Violent Crime Task Force, said: “This incident once again demonstrates the bravery of Met officers, who have acted with the utmost professionalism in a difficult situation.

“Acting on instinct when approaching a suspicious car, they were confronted with two aggressive men who have intimated that they were armed.

“The officers put themselves in harm’s way to protect the public and I would urge anyone with any information to come forward.”