THIS is the shocking moment a driver is knocked out by a single kick to the head following a sickening road rage assault.

The victim was smashed in the face before falling backwards towards the pavement in Portsmouth, Hants. 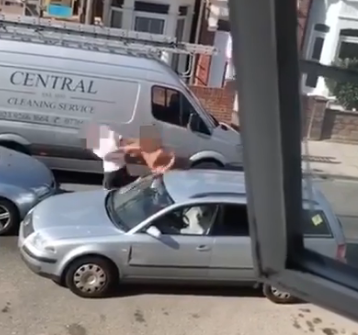 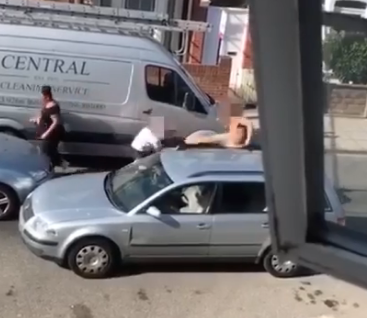 An onlooker captured the horrible scenes from an upstairs window as two motorists began to exchange words when neither would move their vehicles.

The driver of the car in the middle of the road – who has already carried out part of his intended manoeuvre – begs the other driver to move so he can get by.

But within seconds the two men are squaring up to each other before a fight ensues.

The driver of the offending vehicle – who is topless – gets out and smacks the other driver full in the face, with the punch so hard it can be heard on film.

A woman then intervenes and tells the attacker to get back in his car.

The topless man then kicks the other driver before they struggle and he then boots him so hard in the head he is knocked out.

The Sun Online has chosen not to publish this part of the video as the images are too distressing.

Moments later, the topless man then gets in another fight with the woman who tries to prevent him from getting back in his car.

A group assembles as they call 999 for the injured man.

It is not known whether anyone was arrested over the fight, which took on Friday.

People were horrified when the footage was posted to Twitter.

One said: “Some people argue about the stupidest things. The guy in white had right of way but could have been the bigger person. I would rather just get on my way.

The Sun Online has contacted Hampshire Constabulary for comment.

We are investigating a report of an assault in Stubbington Avenue in Portsmouth just before 4.50pm on Wednesday. It was reported the incident followed a dispute between two motorists.

A Hampshire Police spokesman said: "A 43 year-old man has been treated for injuries to his head and continues to receive hospital treatment.

"A 30-year-old man from Havant was arrested on suspicion of assault. He has been released under investigation and enquiries continue. 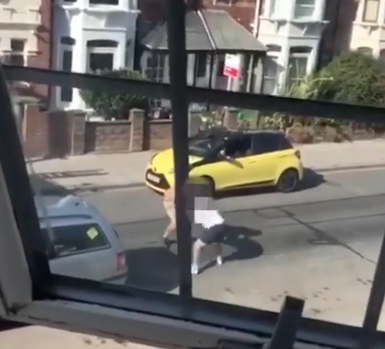 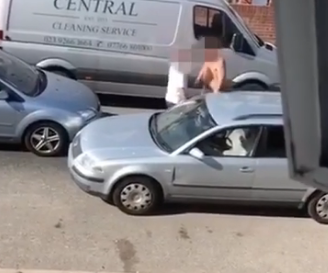