The 19-year-old was attacked in Guildford city centre at around 3am on September 11, 2018.

Police have since released CCTV footage of the incident in the hope to identify those involved.

In it, a group of three men are seen approaching the victim on Woodbridge Road before one strikes him in the face with a single punch.

The teen immediately falls backwards onto the floor, appearing to hit his head on the concrete on impact.

Three culprits are seen running away from the scene as passersby run over to offer the seemingly unconscious man their aid.

Following the assault, the victim had to have a plate inserted in his jaw.

Surrey Police investigating officer Kieran Coffey said: “We have released the video footage as it highlights how just one punch can cause serious injury and have devastating consequences.

“The victim had to have a plate inserted in his jaw following the assault and we are really keen to bring his attackers to justice.

“He did not know any of these men and was walking home after a night out when the incident took place. 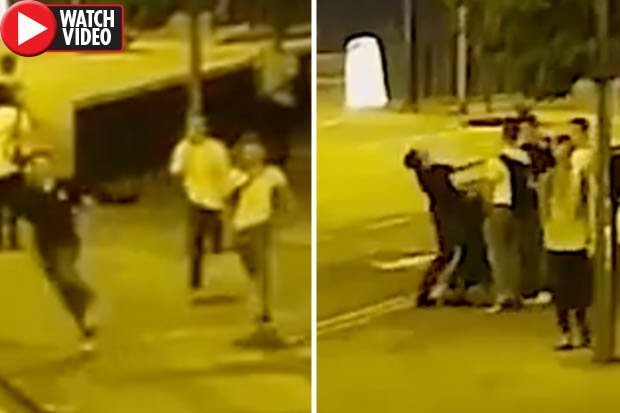 “We would like to identify the three men in the footage, as they may have information that can assist with our enquiries.”

The suspects are all described as white and approximately 20 years old and 6ft tall.

One was wearing a black hoodie, jeans and white trainers.