Gone in 30 seconds: Shocking video shows keyless car thieves picking up the signal to get into Ford Focus while key sat 25ft away in owner’s bedroom

This is the shocking moment car thieves broke into a vehicle parked on a driveway – without smashing a single window or using a key.

Brazen burglars used an aerial to steal a keyless car while the owner slept just yards away in the bedroom.

Jaw dropping CCTV shows how the trio stole a car in Hampton in London in just thirty seconds.

The black and white footage shows three men approaching the house with one standing next to the door of the car and the others standing by the front door of the home.

One man outstretches his arms as his accomplices stand by before suddenly the car’s lights turn on.

The technique, using gadgets available online, is swift and silent.

The men who appear to be dressed in tracksuits wave the wire around in the air as they use the key to access and steal the car.

Police tweeted out the video and urged people to buy blockers.

A message said: ‘Car stolen from a drive in Hampton. How long did it take?? 30 secs. One of the suspects is holding up an aerial to pick up the signal from the key which was actually 25 ft away in an upstairs bedroom.

‘If you have keyless car entry you need to think about blocking the signal.’ 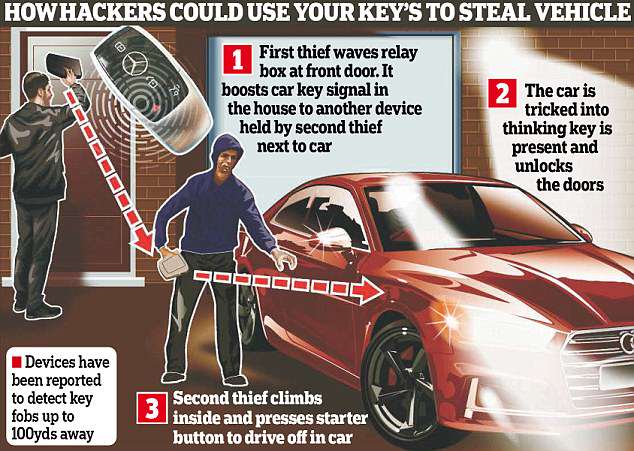 Officers are attempting to find the men who took off with the Ford Focus.

They wrote: ‘The signal can be blocked by a Faraday pouch. As cheap as £5. Either that or get an old fashioned steering wheel lock. I have been told that the cheapest way is to wrap your car key in tin foil but I can’t confirm this works.’

Richard Billyeald, vehicle security expert at Thatcham Research, said: ‘Keyless entry systems on cars offer convenience to drivers, but can in some situations be exploited by criminals.

‘We are working closely with the police and vehicle manufacturers to address this vulnerability, continuing our approach that has driven vehicle crime down 80 per cent from its peak in 1992.’

How do thieves steal your car without the keys? The hi-tech ‘relay’ gadget that uses signals to unlock vehicles parked outside homes

What is relay theft?

Relay theft occurs when two thieves work together to break into cars which have keyless entry systems.

The thieves can use equipment to capture signals emitted by certain keys which are used to start new vehicles.

One thief stands by the car with a transmitter, while the other stands by the house with another, which picks up the signal from the key which is usually kept near the front door on a table or hook.

This is then relayed to the other transmitter by the vehicle, causing it to think the key is in close proximity and prompting it to open. Thieves can then drive the vehicle away and quickly replace the locks and entry devices.

Technically, any vehicle with keyless entry could be vulnerable to relay theft.

How can you protect your vehicle against relay theft?

According to research by the Institute of the Motor Industry, over half of motorists are worried their car could be accessed and stolen by remote thieves.

Fifty per cent of people surveyed weren’t aware that their car might be vulnerable to cyber attacks, and while drivers shouldn’t become paranoid about the safety of their car it’s always a good idea to take precautions.

This has long been a necessary precaution in order to avoid car theft, but it’s important to make sure that your key is as far from the front door as possible so its signal can’t be picked up.

As hacking devices get more sophisticated, they may be able to pick up signals from further away.

This may seem a bit excessive, but a metal box could be the best place to store your keys overnight as the metal could block the signal being detected.

Lorna Connelly, head of claims at Admiral, said: ‘Unfortunately, we do see a claims from customers who have had their cars stolen due to relay theft and it’s a problem that we would advise motorists with keyless cars to be aware of.

‘Despite progresses in anti-theft technology, thieves are always coming up with new ways to make off with your vehicle.

‘We are urging all of our customers to keep their keys a safe distance from the door and consider storing them in a metal box. While this may seem like an extreme solution, relay theft is an extreme practice.’