British police opened fired outside the Ukrainian embassy in London after the ambassador's car was "deliberately rammed".

The official car of the ambassador of Ukraine to the UK Natalia Galibarenko was rammed on Saturday morning about 10am outside the embassy in Holland Park in west London. 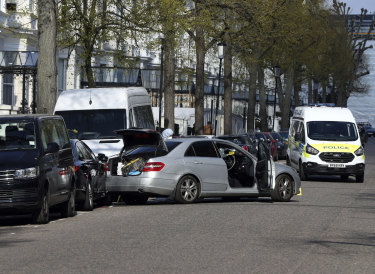 The scene near the Ukrainian Embassy after police fired shots.Credit:PA

"The police were called immediately, and the suspect's vehicle was blocked up," it added.

"Nevertheless, despite the police actions, the attacker hit the ambassador's car again. In response, the police were forced to open fire on the perpetrator's vehicle."

Scotland Yard said a vehicle was driven at police officers when they arrived at the scene.

Officers fired shots and used a Taser to stop the vehicle. A man aged in his 40s was arrested, the Metropolitan Police said.

The man, who was not injured, has been taken to a central London hospital as a precaution.

The incident is not being treated as terrorist-related.