Showed a genuine interest in her students

Enid Borschmann was a highly respected teacher and principal. She also maintained a host of other community and personal interests. To many, Enid was a breaker of glass ceilings and a pioneer educator, but to her it was a matter of doing a job to the best of her ability and enjoying the experience.

The war years came and dad was away for long periods. This, with being eldest (only seven at the start of the war and 13 at the end) put expectations on Enid to help with family and household chores. She accepted this role, and this probably developed her “hard but fair” characteristics that served her well in later life.

Enid was strong, active and skilful. Her football kicking was as good as the best of the boys, her marbles skills passed many a test and as a teenager she held the cherry-picking record at a local orchard, which made front page of the Border Morning Mail. Guess what she bought with her first pay cheque? Not a pink nightie or a new dress, but an axe. Academically, Enid was capable but not at the top of her class.

She graduated from Larnook Teachers’ College in 1952, taught in several Victorian regional schools and spent time back at Larnook as a lecturer before moving to Mildura High School in 1964. Within a decade she was appointed principal of Red Cliffs High School. Being one of the first women to become principal in a Victorian co-educational school, she often had to earn her respect, but it kept growing with time. She transferred to Mildura High School as principal in 1981 and remained there until her retirement in 1990.

While Enid inspired many people, she was inspired by many others. This inspiration led to world-wide travel and some very adventurous appointments. One of the first was in 1967 as an exchange teacher to the Domestic Science College in Belfast. As this was before air travel became popular and affordable, she travelled by P&. The base in Belfast allowed Enid to travel extensively through Britain and Europe. Ultimately, she visited every continent and spent much time visiting and exploring many countries. 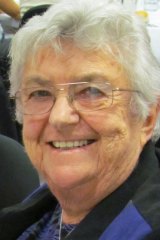 Robert Scott’s ill-fated expedition to the South Pole sparked Enid’s interests in Antarctica, and she spent a year at Macquarie Island from November 1977. She loved the experience and made lifelong friends. While most of her time was at the base planning and preparing meals, there were many opportunities to explore the island and record the wildlife. On a trip to North Head, she stumbled and dislocated a shoulder. On the return journey one of the stretcher-bearers stumbled and Enid hit the deck. Remarkably, her dislocated shoulder popped back in.

In 1985, Enid went farther south and spent a year at Mawson Base on the Antarctic mainland. The temperature at Mawson was minus 30 degrees, with 24 hours daylight in summer and 24 hours darkness in winter.

Her position as caterer absorbed most of her time but she also had the job of poo collecting from various islands and locations so that biologists in Hobart could document the diet and nourishment of penguins.

With her leadership and management skills well demonstrated as school principal, Enid accepted opportunities to serve on several community organisations. These included the Mildura Base Hospital board of management with a term as president, member Royal Flying Doctor Auxiliary and president for 10 years, a Meals on Wheels volunteer for 20 years, a volunteer at annual asthma camps at Lake Cullulleraine, and a staunch supporter of the Upland/Mildura Sister City Association. In 1976 while attending the Montreal Olympics, which coincided with the bicentenary of Upland, California, the Mildura mayor asked Enid to represent him at the celebrations and present a Mildura flag. In 2006, Enid was named Mildura citizen of the year.

Enid still found time to travel and camp regularly with family and friends. The camps ranged from a few nights on the river to extended outback trips around Australia. A game of golf was always in the offing until her back said no more. And, of course, a wine-and-food appreciation night was a regular on her calendar.

Joan Kirner, who at the time was deputy premier of Victoria and education minister, attended Enid’s retirement function. Ms Kirner said Enid was an inspiring and capable educator, and, had she been willing to leave Mildura, the choice of educational roles in Victoria would have been hers.

The many tributes from students, parents and colleagues are hard to summarise but there is an underlying theme. While Enid was hard but fair, she showed a genuine interest in trying to help students. While a visit to her office was made with trepidation the outcomes were often much more positive. She would talk to the students to find out if there were underlying problems, listen to them and suggest different ways of doing things, rather than berate them and punish them unnecessarily. The final words sung by a student at Enid’s retirement were “You are the wind beneath my wings.”

Enid lost her ability to walk and spent her final two years in Princes Court, Mildura. Given her circumstances, Enid was comfortable and contented being surrounded by caring staff and friends. She is survived by eight of her sisters and brothers.

Ray Borschmann, Enid’s brother, prepared this tribute with help from many quarters.