Singapore locks down for a month as mystery COVID cases rise

Singapore is returning to lockdown conditions it last imposed a year ago, banning dining-in and limiting gatherings to two people, as a rising number of untraceable infections pressures one of the world’s COVID-containment stories.

For four weeks from May 16 to June 13, gathering sizes as well as household visitors will be cut to a maximum of two people from five people now, working from home will be the default and food places can only do takeaways and deliveries. The government will review the lockdown conditions after a fortnight.

“A pattern of local unlinked community cases has emerged and is persisting,” the health ministry said in a statement on Friday. “We need to act decisively to contain these risks as any one leak could result in an uncontrolled resurgence of cases.” 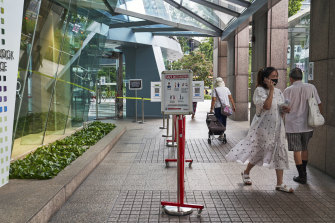 the flareup is a major setback by Singapore standards, as the city-state is, like Australia, one of handful of “COVID havens” that had previously nearly eliminated the pathogen domestically. Credit:Bloomberg

While the numbers are far smaller than ongoing outbreaks in countries such as the US that are charging ahead with opening up, the flareup is a major setback by Singapore standards, as the city-state is, like Australia, one of handful of “COVID havens” that had previously nearly eliminated the pathogen domestically.

The return to near-lockdown in Singapore puts in doubt high-profile global initiatives meant to showcase its control of the virus. A long-planned air travel bubble with Hong Kong, set to start May 26, is now unlikely to go ahead on schedule. Singapore was also scheduled to host the Shangri-La Dialogue early next month and the Davos-based World Economic Forum in August.

Given the new ban on dining-in, the Singapore government will increase job support subsidies for food and beverage firms as well as waive rental for one month for hawker stall and coffee shop tenants.

It is also stepping up virus testing from May 15, and will start using rapid test kits for people with symptoms at health centres.

Changi Airport is now the single biggest cluster of COVID cases, with 46 linked to the aerodrome, raising fears that travellers have spread the pathogen to airport staff despite strict post-arrival quarantine regulations.

The government closed the airport terminals and connecting Jewel shopping mall to the public for two weeks from May 13, though it remains open for air travel. It has also been testing workers in the facilities.