Theresa May arrived to visit the Irish border for the first time since the EU referendum today – and flew straight into a Brexit row.

Sinn Fein – the Irish Republican Party which vehemently opposes Brexit – slammed her trip as ‘too little too late’.

And Michelle O’Niell, the party’s leader in Northern Ireland, warned the Prime Minister will hear that local communities and businesses fear Brexit will be ‘catastrophic’ for them.

The PM is visiting local businesses and speaking to politicians as she tours the area in a two-day visit to try to sell her Chequers Brexit plan.

The Irish border question is proving to be the thorniest issue in the Brexit talks – and the PM’s attempts to broker a compromise to keep the crossing soft has almost cost Mrs May her premiership.

Savaged by both Remainers and Brexiteers, the PM is desperately trying to drum up support for her Brexit blueprint  and keep it on the negotiating table. 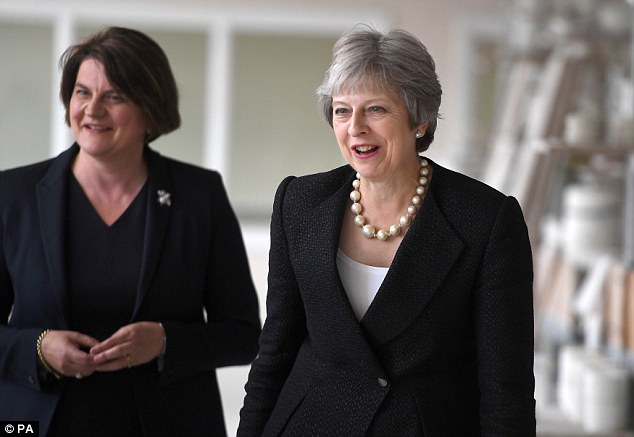 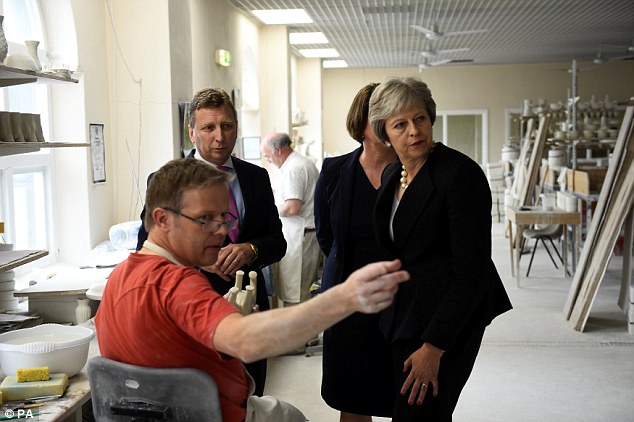 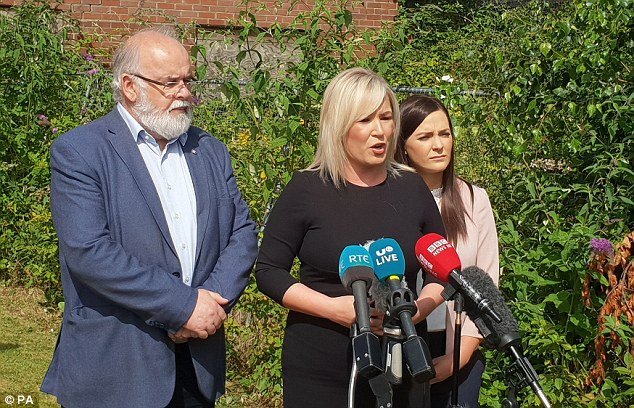 Sinn Fein Northern Ireland leader Michelle O’Neill (pictured, centre, today) said the PM’s trip was too late – and warned her that communities are terrified about what Brexit will mean for them

Mrs May met with Arlene Foster – the leader of the DUP, the small Northern Irish unionist party propping Mrs May up in No10 – as she arrived tonight.

The DUP leader is expected to reiterate her warnings to the PM that her party will not countenance any Brexit deal which puts up customs borders between the island of Ireland and the UK.

Speaking ahead of meeting Mrs May tomorrow, Ms O’Neill tore into the PM’s Brexit plans.

She said the Tory leader would hear the ‘fear and trepidation’ of locals living and working near what is to become the UK’s only land border with the European Union. 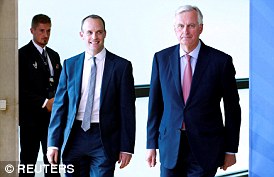 The EU economy will take a $250billion-a-year hit if there is no trade deal with Britain, a global watchdog warned today.

The bloc as a whole would see 1.5 per cent knocked off its GDP – and the impact on Ireland would be much worse at around 4 per cent.

The scale of the potential damage to the EU from the collapse of Brexit talks has been underlined in a new report from the International Monetary fund.

Previous estimates have suggested the UK would face a 4 per cent blow from no deal.

A document released by Eurocrats also urged businesses to start preparing for no deal, and raised the prospect of long queues at borders and ports, disruption to planes and new restrictions on data transfers if there is no agreement.

‘I am quite clear what she will hear today, she’ll hear about the catastrophic implications of Brexit, the fear and trepidation of the business community in terms of what comes next for them.

‘We can’t withstand being outside the customs union and the single market.

‘Theresa May needs to realise that we will not be collateral damage her for own reckless Tory agenda.’

Mrs Foster said the PM would hear of the challenges and opportunities presented by Brexit.

‘This visit will enable Mrs May to speak with people who live, work and travel across the much talked about Irish border on a daily basis,’ said Mrs Foster.

‘She will hear first-hand examples of how people see both challenges and opportunities for their sectors as we leave the European Union.

‘For our part, we want to see a sensible exit from the European Union which works for Northern Ireland, the United Kingdom and our nearest neighbours in the Republic of Ireland.

‘That must mean that our national Parliament takes back control of our laws, borders and money and that there are no new internal barriers created inside the United Kingdom.’

Ahead of her arrival, Mrs May said: ‘I look forward to hearing views from businesses on the border in Northern Ireland on our departure from the European Union.

‘I fully recognise how their livelihoods, families and friends rely on the ability to move freely across the border to trade, live and work on a daily basis.

‘That’s why we have ruled out any kind of hard border. Daily journeys will continue to be seamless and there will be no checks or infrastructure at the border to get in the way of this. 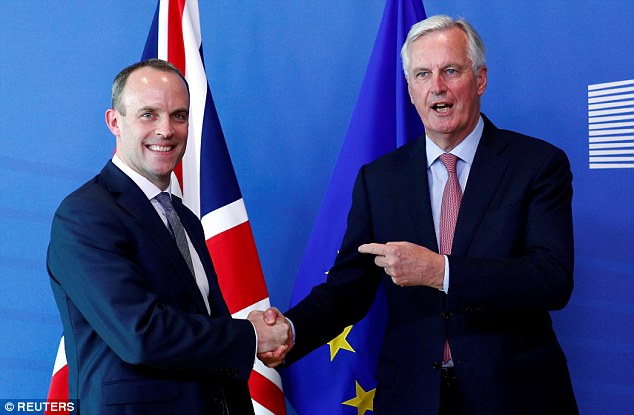 ‘I’ve also been clear we will not accept the imposition of any border down the Irish Sea and we will preserve the integrity of the UK’s internal market and Northern Ireland’s place within it.’

Tomorrow she will deliver a speech in Belfast focusing on how her Chequers Brexit blueprint will work and help safeguard peace in Northern Ireland.

The issue of the Irish border is one of the trickiest points in Brexit talks as the border will become the UK’s only direct land crossing with the EU after Brexit.

There are fears that any return to the hard border – including the checks and guard patrols – of the past could reignite the bloody sectarian violence which plagued the region for 30 years.

Mrs May said she is committed to keeping a soft border, and her Chequers plan pits forward the idea of sticking to EU rules on the trade of goods – in part to avoid a hard border.

Bit her plans have been savaged by Brexiteers and coolly received by Europe – raising serous questions over if they will last the summer.