The official website got 30million hits across all its pages during the same period by people either checking symptoms of Covid-19 and other illnesses.

There have been 780,786 cases referred to call handlers since March 18, the data shows.

NHS 111 provides information on illnesses and what to do next, and has been the first port of call for people who are concerned they have Covid-19.

But the service has been accused for a number of failings, including that critical symptoms of Covid-19 were not added to the main list for several months.

Families of relatives who have died of Covid-19 claim the system has cost lives because it did not give correct advice or call handlers were too busy to answer the phone. 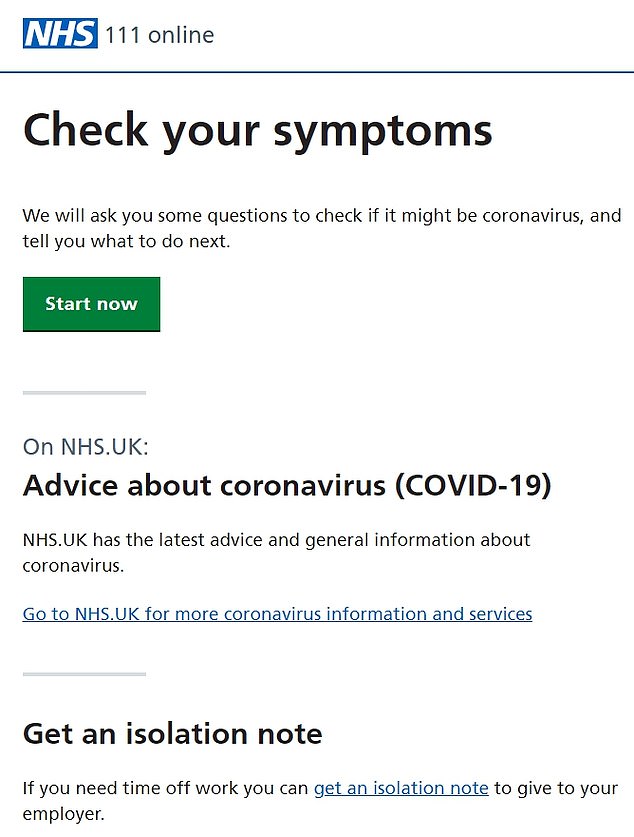 Some 2,881,198 online assessments have taken place since then, suggesting three million were before this date and before lockdown was imposed, on March 23.

The data breaks down how many questionnaires were undertaken by each age group, gender, and their location by day.

It shows the most assessments – 1,704 – were undertaken by women aged between 19 and 69 years old who lived in Birmingham on March 23.

When users visit the NHS 111 website they are asked a series of questions about their travel history.

WHEN, WHERE AND BY WHOM WERE THE MOST CORONAVIRUS ASSESSMENTS DONE?

They are then quizzed about whether they have knowingly come into contact with someone who has travelled to regions with outbreaks.

Finally users have to input their symptoms, including whether they have a new, persistent cough, a fever or a lack of smell and/or taste.

After taking the quiz, people are given health advice based on the symptoms or travel history they reported.

The service has been criticised for a number of failings including that it did not give information that was relevant at the time.

In March, the site was failing to tell the public they needed to self-isolate for a fortnight if they had just returned back from Italy – where swathes of cases of Covid-19 were brought from in the early days of the pandemic.

The site only instructed people to stay at home if they have been in certain regions in the North, even though the Government advice was officially extended to all of Italy two days prior, on March 11.

And the public were being turned away completely if they or people close to them haven’t left the country in the last two weeks.

The disease was spreading rapidly between people in the UK at this point.

But the government has repeatedly claimed the science did not support that transmission between people was happening on British soil until later on.

NHS Digital said it made more than 70 update to the information on the site, which could include adding loss of taste and smell as a key symptom in mid-May.

For a long time, the NHS could only tell most people suffering Covid-19 symptoms to self-isolate because testing was not available to the public.

At the height of the pandemic, testing was extremely limited and only available to patients admitted to hospital, which further angered users of the service.

Dozens of ‘scared’ Britons who were turned away by the online service in March blasted it as ‘rigid’ and claimed it was leaving some patients ‘to die’.

Several months later, families of Covid-19 victims partially blame the lack of accessibility of the NHS service for the deaths of loved ones.

Four members of the Covid-19 Bereaved Families for Justice group, who each lost their fathers to the virus, gave evidence to the newly-formed All Party Parliamentary Group on coronavirus this month.

They said they believed their loved ones would be alive if the Government had provided better medical advice, including via the helpline, locked down the country earlier, shut borders and quarantined travellers sooner.

Founder of the bereaved families group Jo Goodman lost her father, Stuart, 72, to the virus on April 2. He caught it the week before lockdown.

Ms Goodman said many of their 1,450-strong members believed their loved ones struggled to get through to 111, or were told not to go to hospital despite being ‘in the worst condition of their lives’.

‘There is a huge amount of people in our group where the 111 service was telling people to stay at home despite symptoms which were extremely severe,’ she said.

‘People were passing away with no medical intervention other than paracetamol and bedrest.’

Miss Goodman said families had complained that the 111 lines were constantly busy, call handlers had failed to take medical history into account and symptoms were mis-read or communicated incorrectly, especially where patients did not have English as their first language.

Charlie Williams, whose father Rex, 85, died after contracting the virus in a care home, said the helpline was ‘responsible for many deaths’.

He said black and ethnic minority members of the bereaved families group had told him call handlers had made judgments on irrelevant questions, such as whether their loved one’s lips had turned blue.

‘With a black person, you cannot tell if their lips are blue,’ he said.

NHS 111 provides services to England while Scotland has NHS Inform and Wales has NHS Direct Wales.

Ben Davison, director of citizen health tech at NHS Digital, said the latest figures ‘show how important the use of digital tools is in supplying vital health information to members of the public’.

He said: ‘Since the start of the pandemic we have seen the number of NHS 111 online users increase dramatically.

‘This is helping to relieve the burden on frontline NHS services as well as helping to get vast numbers of people the correct advice for their condition.’