Survey days before May 18 vote shows Labor Party ahead of the Liberal-National coalition, 51 percent to 49 percent. 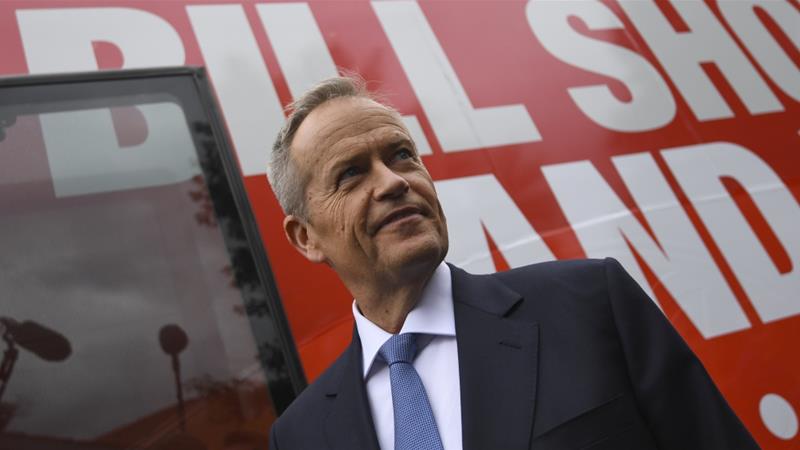 Australia’s opposition Labor Party retains a narrow lead over the conservative coalition government, a closely watched poll has shown, days ahead of the country’s general election.

Monday’s Newspoll showed Labor ahead of the Liberal-National coalition, 51 percent to 49 percent, unchanged from polls over the past two weeks on a two-party preferred basis, where votes are distributed until a winner is declared.

Based on the poll, Labor would end up with 77 seats in Australia’s lower house, above the 76 needed to form government, against 68 for the coalition and six for other parties. Currently, Labor holds 69, the coalition 73 and other parties eight.

Australians will go to the polls on May 18.

However, Labor has promised bigger budget surpluses than the government, with plans to slash generous tax concessions aimed at the country’s wealthiest.

Shorten found popular support last week from voters who objected to a conservative tabloid’s report about the life of the opposition leader’s late mother. The report described Shorten’s account of his mother’s career struggles as inaccurate, which some, including the prime minister, saw as an unfair attack.

Morrison, who turned 51 on Monday, had an egg thrown at him on the campaign trail last week by a young woman apparently protesting against Australia’s treatment of asylum seekers. The egg grazed his head without cracking. Morrison called the act “thuggery”.

The election contest is expected to come down to a number of tightly fought seats in Queensland, New South Wales and Victoria, many of which feature independent candidates pushing for strong action on climate change.

The poll surveyed 1,644 voters across Australia on May 9-12. The maximum sampling error was plus or minus 2.4 percentage points.