Social media is blamed for surging anti-Semitism in France, as Jewish groups warn racists ‘now have a much bigger audience’

‘Heil Hitler’ and ‘Filthy Jews’ crept into comments on a video report on a desecrated Jewish cemetery, pushing French authorities to raise pressure on social media to banish hate-based content.

President Emmanuel Macron visited a desecrated Jewish cemetery in Quatzenheim, eastern France last week. A regional television channel covering the event was forced to cut the report from its Facebook page as result of dozens of scathing comments. 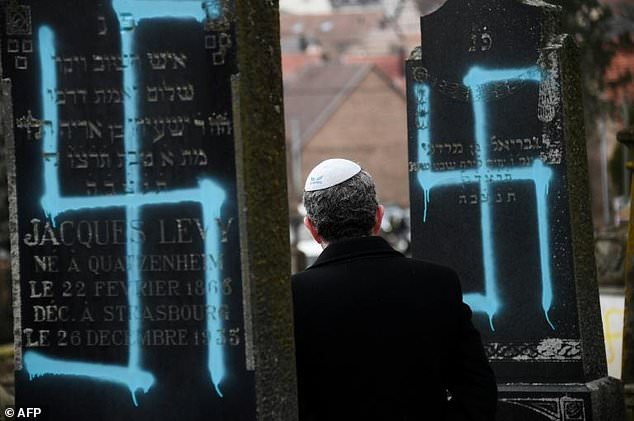 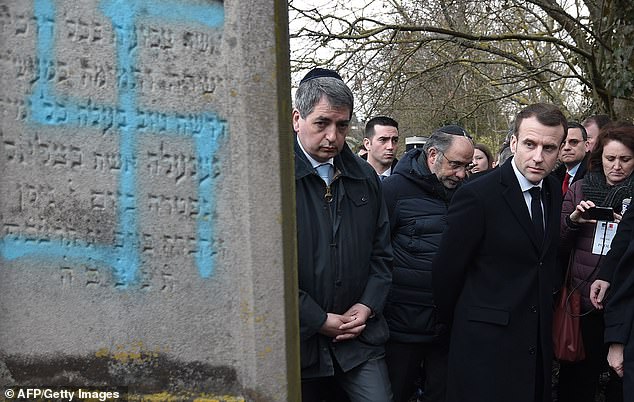 French President Emmanuel Macron looks at a grave vandalised with a swastika during a visit at the Jewish cemetery in Quatzenheim, on February 19, 2019, on the day of a nationwide marches against a rise in anti-Semitic attacks. Around 80 graves had been vandalised

The internet and social media give anti-Semites a stage that widens their audience, and tools to organise networks, says Sacha Ghozlan, head of the French Jewish Students Union.

‘We have seen in the past 15 years that people who used to just express themselves in dark basements now have a much bigger audience,’ Ghozlan told AFP.

And the internet allows such people ‘to ally anti-Semites of varied and normally opposite tendencies on shared hatred of Jews,’ he added, pointing to groups at the extreme right and left. 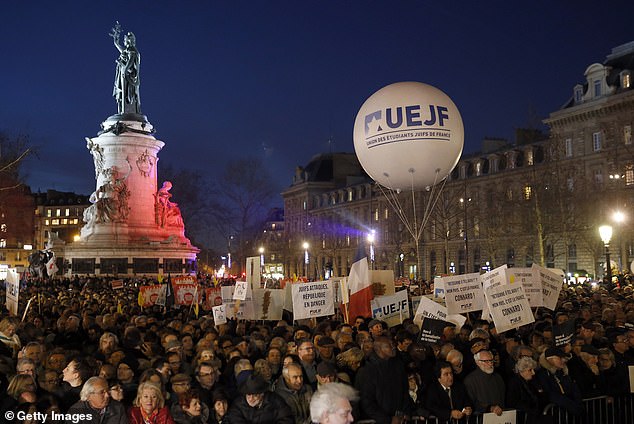 Protesters assembled at a rally against anti-Semitism on February 19 in Paris, France 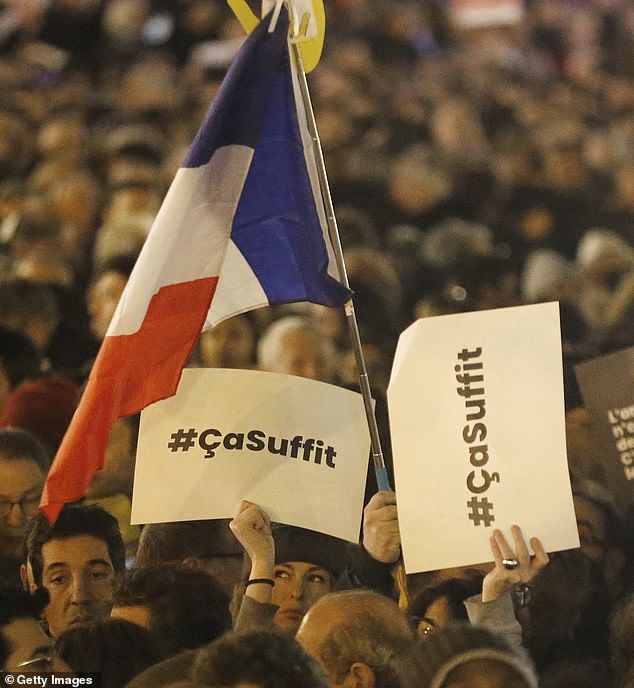 ‘What is virtual violence for some has become very real for others,’ Ghozlan said.

‘If we are seeing hate messages multiplying on walls in Paris it is also because for too long we’ve been used to remaining silent and not responding to hate messages that are posted by thousands each day on the internet,’ he added.

The UEJF has fought online hate speech for 20 years, and in 2013 it convinced judicial officials to order Twitter to suppress tweets associated with hashtags such as ‘UnBonJuif’ (A Good Jew, suggesting the ending ‘is a dead Jew’), #SiMaFilleEpouseUnNoir (If my daughter marries a Black), or #SiMonFilsEstGay (If my son is gay).

Social media are also now obliged to furnish IP addresses of racist or homophobic tweets, and to provide a global platform so that such messages can be signalled to network managers, he said.

Former Twitter boss Dick Costolo acknowledged in 2015 that it had lagged in tackling online attacks, and it has since improved ways of highlighting hostile content and blocking it. 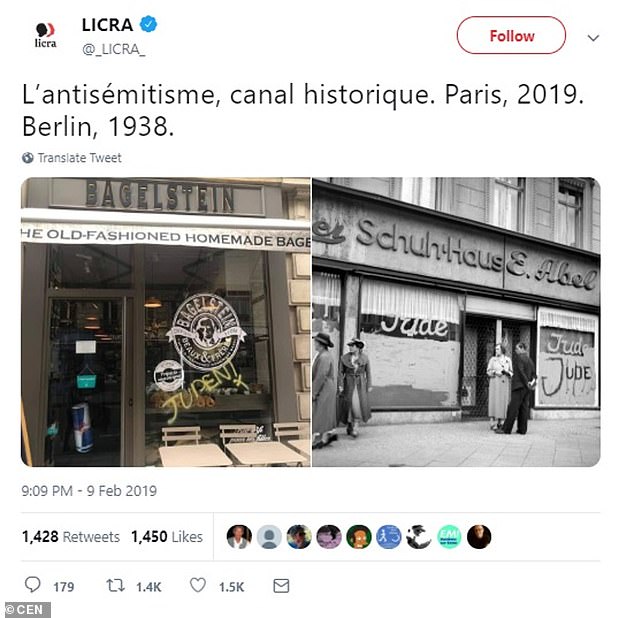 A viral tweet of racist graffiti that read ‘Juden’ (‘Jews’) on a bagel shop in Paris, 2019, alongside a similar picture showing ‘Jude’ written on shop windows Berlin, 1938. 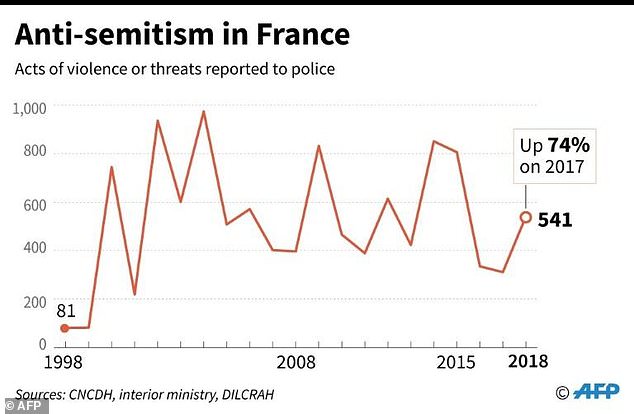 In mid-February, a Twitter spokeswoman said its top priority was untroubled dialogue, and that technological investments had seen a 214 percent leap in preventive interventions last year and ‘a drop in the number of alerts.’

But Ghozlan insisted that ‘there is a lot more work to do,’ citing the dozens of insults, threats, hate-filled and defamatory comments he receives on an almost daily basis.

He protested meanwhile that the hunt for hate content was in the end a matter for victims.

‘Major platforms repeat that we must alert them to content, but we are not the Net’s rubbish collectors, we do not want to spend our days doing that,’ he said.

Rather, social networks should automatically eliminate hate messages, as they do now ‘for content that violates copyrights or is paedophile’ in nature.

Offensive visual content is most often rejected before it even reaches the Net, thanks to artificial intelligence programmes, but it is a different story for abuse and insults, which require human intervention. 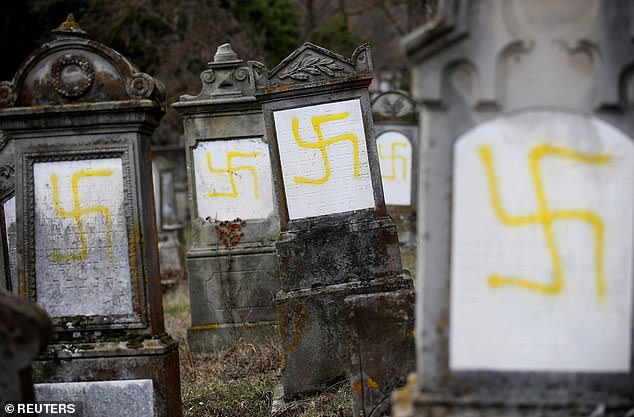 Graves were desecrated at the Jewish cemetery in Quatzenheim, near Strasbourg, France 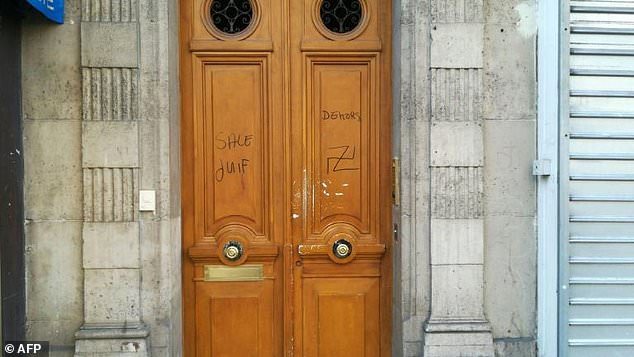 Some insults can be allowed moreover, depending on the context and who is posting them (such as a victim who quotes remarks or a minority that seizes upon an expression to empty it of malicious meaning).

The French government hopes to have legislation ready by May that will force online platforms to take more responsibility.

The UEJF believes the best way is to hit them is in the wallet, by imposing a fine ‘indexed with their French revenues, if the hate content has not been deleted within 24 hours,’ Ghozlan said.