Protests and activism began after 19-year-old Nene Mrwetyana was murdered in August. 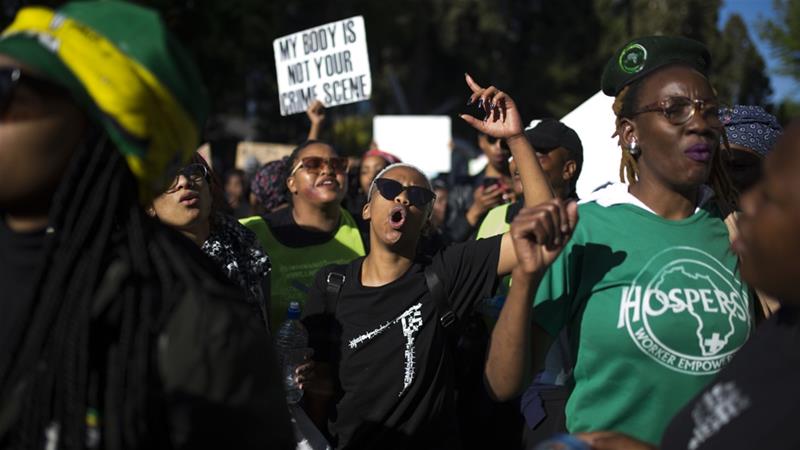 Thousands of protesters wearing all-black, brandishing placards and singing apartheid-era struggle songs took to the streets of Johannesburg to demonstrate against what they called a scourge of femicide in South Africa.

Friday’s demonstrations, which police said were attended by 4,000 people in the Sandton neighbourhood, followed weeks of renewed activism and protests against gender-based violence in the country.

The move has been brought to the forefront of South African society after 19-year-old Nene Mrwetyana was raped and murdered in August by a post office employee Luyanda Botha.

Both told police he struggled to kill Mrwetyana, a University of Cape Town student, after luring her to the Clareinch Post Office in the Western Cape to rape her.

“We have failed them in a legal sense, on a societal sense, in our community and in our churches. Every institution in South Africa has failed to protect women. It’s become so endemic in our society that people somehow think this is the norm,” she said.

Lindelwe Nxumalo, another protester who stood on a blocked-off street in the city centre, said Mrwetyana “had her entire life ahead of her, like so many women that are treated like this by the men in South Africa”.

Nxumalo wore a T-shirt that read #AmINext, the hashtag demonstrators have rallied behind.

The protest, which was organised by a coalition of gender rights activist organisations, culminated in a march to the city’s financial capital and the headquarters of the Johannesburg Stock Exchange (JSE).

There, the attendees demanded that South Africa’s corporate sector provides funding and detailed plans to assist with combatting gender-based violence, carrying placards that read “I don’t want to die with my legs open” and “Actions not words”.

Marching and dancing up and down streets adjacent to the JSE, the protesters brought parts of South Africa’s financial capital to a standstill.

“The pain the women in this country are feeling is palpable. I completely understand the need to be heard,” Nicky Newton-King, JSE’s CEO, told reporters as she accepted a memorandum of demands.

“The important point of this though is to how we mobilise the correct business response to what is a complete tragedy for this country. We have committed to take this to big business and devise how to respond appropriately,” she added as some jeered in the crowd.

The demonstration comes a day after police released official crime statistics showing a countrywide murder rate of 58 a day, a 3.4 percent increase in a year.

During the previous period, for every 100,000 women in South Africa, an average of 15.2 were murdered, according to government data. 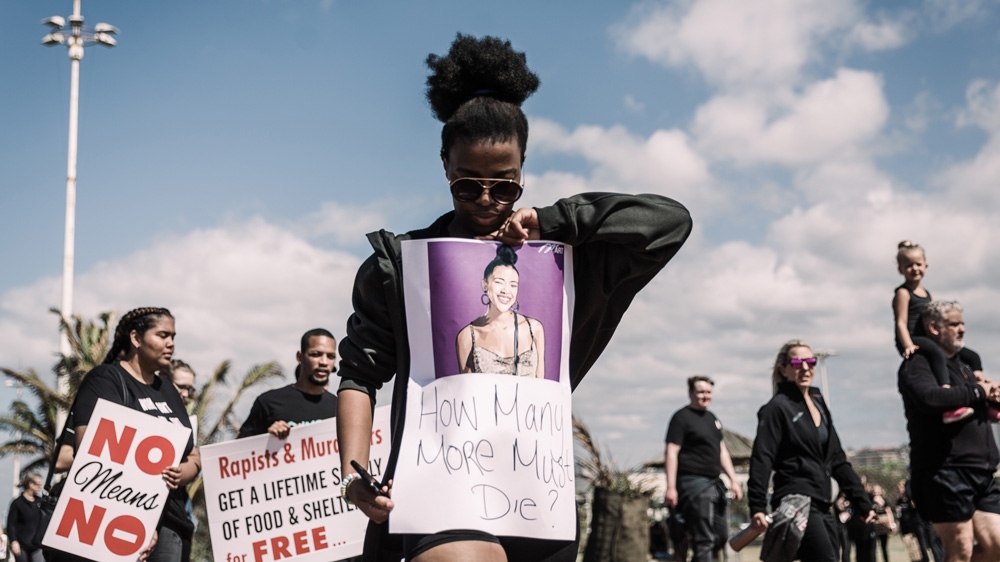 The statistics do not provide a breakdown of the motive behind the murder of women, so it is not possible to say how many were killed because they were female.

A World Health Organization (WHO) report in 2016 indicated South Africa had the fourth-highest female interpersonal violence death rate out of the 183 countries listed, behind only Honduras, Jamaica and Lesotho.

Incidents involving sexual violence and assault have also spiked 4.6 percent year on year with a total of 41,583 reported cases of rape in the 2018-19 financial year, according to South African Police Service statistics.

Although this could be higher as a Rhodes University study suggests that only about 10 percent of all rapes are reported to the police.

The numbers also do not paint an accurate reflection of other vulnerable groups in the LBGTQI community too suffering disproportionate violence in South Africa.

“Patriarchy is so strong that it isn’t only straight women that get it. Men think they can do what they like, when they like in this country,” said another protester, Litha Malula, wearing a black beret.

The government has been criticised for a lax approach towards crime affecting women and children, even after President Cyril Ramaphosa addressed the nation last week in the wake of the public outcry, promising tougher action against perpetrators of sexual violence and the national publication of a sex offenders register.

“Cyril isn’t serious!” read one angry banner draped at the protest on Friday.

Ramaphosa has since cancelled his scheduled trip to address the United Nations General Assembly next week to concentrate on “critical domestic matters”, according to a statement released by the presidency.

Ramaphosa will now address an urgent joint sitting of parliament and the national council of provinces on Wednesday, the first of its kind since former President Thabo Mbeki fired his then-deputy Jacob Zuma in 2005.

But many protesters fear tougher laws or other similar government initiatives would not deter offenders or change anything.

Academics have pointed to the high levels of unemployment, inequality and poverty as a major contributing factor to the violence directed towards women.

The unemployment rate is 29 percent in a struggling economy, which is expecting meagre growth in 2019.

“Its all leading to a general desperation in society,” said Lisa Vetten, of the University of Witwatersrand Institute for Social and Economic Research.

“The disenfranchised cannot exert much power and what that often translates to is people using violence to express their frustration,” she said.

To change the atmosphere of violence, the issues at its root must also be confronted by the men of South Africa, protester Tefo Tlale said.

“Women don’t feel safe. They don’t feel like this is their country. As a black African man, women are not seen as equal decision-makers or having a critical role to play in society,” said Tlale, who was among the crowd gathered outside the JSE.

“We have to undo that learning and ensure the next generation don’t grow up in a society where they think they are better just because they are men,” he said.