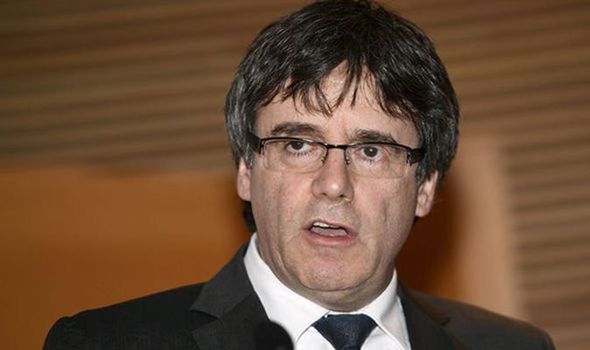 Mr Puigdemont’s Together for Catalonia has vowed to take legal action to have his candidacy recognised.

Two other Catalonian separatists, who also face charges other the 2017 referendum, have been blocked from the list too.

According to a Together for Catalonia statement, centre-right parties People’s Party and Ciudadanos both appealed to the Electoral Commission to complain about Mr Puigdemont’s candidacy.

The statement said: “Faced with this flagrant violation of a fundamental right such as the right to stand in an election, Together for Catalonia will immediately deploy all legal actions in Spain and Europe to defend the rights of the three candidates and the rights of the voters.”

The three candidates all received written confirmation of their exclusion from the European election lists.

They were told they “do not meet the conditions for electors,” according to media reports in Spain.

Mr Puigdemont and fellow candidate, Toni Comin, both currently reside in Belgium, while the third lives in Scotland.

The People’s Party in its appeal to the Electoral Commission said the three candidates would not be able to fully serve their electorate as MEPs.

The trio face being arrested if they return to Spain because the 2017 referendum was deemed illegal by the Spanish courts.

The declaration of Independence by the region prompted Madrid to oust the regional government.

Mr Puigdemont was also blocked from visiting Canada days before he was due to visit the country at the invitation of a Quebec independence movement.

Days before he was due to land on April 2, his electronic travel authorisation was blocked by the Canadian Government.

The ETA program was designed in to scout potential security threats and prevent them entering the country.

Stéphane Handfield, Mr Puigdemont’s lawyer, said: “This guy is not a criminal or a member of a terrorist group. He was the democratically elected president of Catalonia, who happened to have organized a referendum like we’ve had here in Quebec.”