Madrid: Spanish Prime Minister Pedro Sanchez says that troops will be made available to help regions overcome a resurgence of the coronavirus, following Spain's worst week for infections since the epidemic's peak in late March.

He also said regional administrations could make decisions themselves on how to handle the fight against the pandemic rather than have the central government take charge. 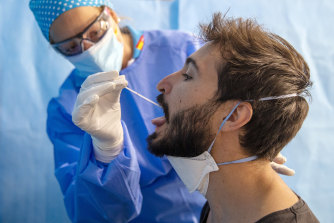 A man is tested for COVID-19 at a medical centre in Madrid.Credit:AP

The government would support requests by regional leaders to declare localised states of emergency, Sanchez said.

"The pandemic data curve is worrying and has to be contained. We have to be calm and vigilant," Sanchez said after the first cabinet meeting following the summer recess.

Spain's cumulative tally of coronavirus cases — already Western Europe's highest — hit 412,553 on Tuesday, but new infections, at 2415 in the past 24 hours, appeared to have ebbed after a surge last week when more than 7000 cases were registered for four days in a row, Health Ministry figures show.

The daily numbers can be updated retroactively.

Infections have risen sharply since Spain lifted a three-month state of emergency and lockdown in late June, but daily deaths have been much lower than in March-May. With 10 new deaths logged on Tuesday, Spain's total toll stands at 28,924.

"Regions that do not have enough tracers can count on the support of our country's armed forces," Sanchez said, pledging an initial 2000 troops would be made available.

Regional authorities have brought back some restrictions that were lifted along with the national lockdown, but some regions, including hard-hit Madrid, have complained about a lack of legal measures or concerns about how to use those available.

Following concerns from parents and teachers over a lack of clarity on government and regional plans for the safe reopening of classrooms in about two weeks, Sanchez said: "I guarantee to the fathers and mothers and teaching staff that educational centres will be safe from COVID, and that they will be much safer than many other environments where our young ones have been in the past few weeks."

Both Madrid and Catalonia announced they would carry out mass testing of students and hire more staff to ensure smaller class sizes when the new term begins.

India reported on Tuesday the highest number of new coronavirus cases globally for the 18th straight day, remaining well ahead of the US and Brazil, a Reuters tally based on official reporting showed.

It took India from the end of January, when the country's first case was reported, until July to reach around 1.6 million cases, a period when the government imposed a strict lockdown.

However, infections have rocketed by another 1.5 million since the start of August, taking the total to around 3.1 million, behind only Brazil and the US.

The rate of new cases in India is increasing rapidly, climbing by 60,975 in the latest 24-hour period, according to the federal health ministry.

"If we cross the absolute numbers (in Brazil and the US), I won't be surprised, but we also have a larger population," said Giridhar Babu, epidemiologist at the non-profit Public Health Foundation of India.

But deaths have remained comparatively low — at 58,390, or 1.84 per cent of total cases — lower than the global mortality percentage of 3.4 per cent.

India reported its first COVID-19 fatality in mid-March, with the death toll rising to around 35,700 by the end of July. In August so far, around 22,600 deaths have been recorded. Deaths are considered a lagging indicator, given the two-week incubation period of the disease.

Prime Minister Narendra Modi's government has said it is reassured by the high recovery rate — around 75 per cent of the total 3.1 million cases are no longer infected, according to data from the federal health ministry.

Brazilian Senator Flavio Bolsonaro, the eldest son of president Jair Bolsonaro, has tested positive for the novel coronavirus, according to a statement by Flavio's spokesman.

Flavio has no symptoms of COVID-19 and is at home, it said, adding he has started taking chloroquine and azithromycin as part of a treatment against the virus. 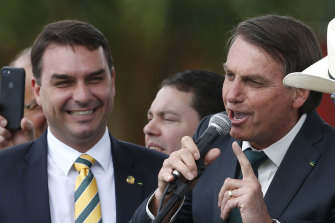 President Bolsonaro is a big supporter of chloroquine, a drug used to treat malaria, despite the lack of solid evidence it works against the disease.

Bolsonaro himself caught the virus earlier, as well as his wife Michelle Bolsonaro and his youngest son, Jair Renan.

Gaza in lockdown to contain its first COVID-19 outbreak

Gaza was in lockdown on Tuesday after the first cases of COVID-19 in the general population of the Palestinian enclave, whose restricted borders until now had helped spare it from an outbreak.

Health authorities in the Hamas-controlled territory are concerned over the potentially disastrous combination of poverty, densely populated refugee camps and limited hospital facilities in dealing with an outbreak. 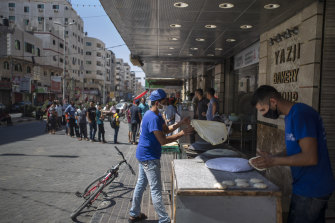 Palestinians line up to buy bread during a 48-hour lockdown.Credit:AP

A government spokesman said the four cases were uncovered after a woman travelled to the West Bank, where she tested positive. Four members of her family then tested positive in Gaza, the first cases outside quarantined border facilities.

Interior Ministry spokesman Eyad al-Bozom said the family had been in contact with many other people in the Maghazi refugee camp in central Gaza, and that the camp was now isolated from the rest of the 360 square kilometre territory.

"Pandemic investigation committees are conducting the necessary tests to follow up the conditions of the infected four people and those who had come in contact with them," he said.

Businesses, schools and mosques were shuttered late on Monday, and the enclave's streets were largely deserted as police broadcast loudspeaker warnings to obey a 48-hour curfew.

Get our Coronavirus Update newsletter for the day’s crucial developments and the numbers you need to know. Sign up to The Sydney Morning Herald’s newsletter here and The Age’s here.