Spain’s government has approved legal amendments ensuring the remains of former dictator General Francisco Franco will be dug up and removed from a controversial national mausoleum honoring its civil war dead.

The minority Socialist government is certain that parliament will endorse the amendments, probably in a debate next month, deputy prime minister Carmen Calvo told a news conference.

The amendments to Spain’s Historical Memory Law of 2007 grant the government power to exhume Franco’s body. 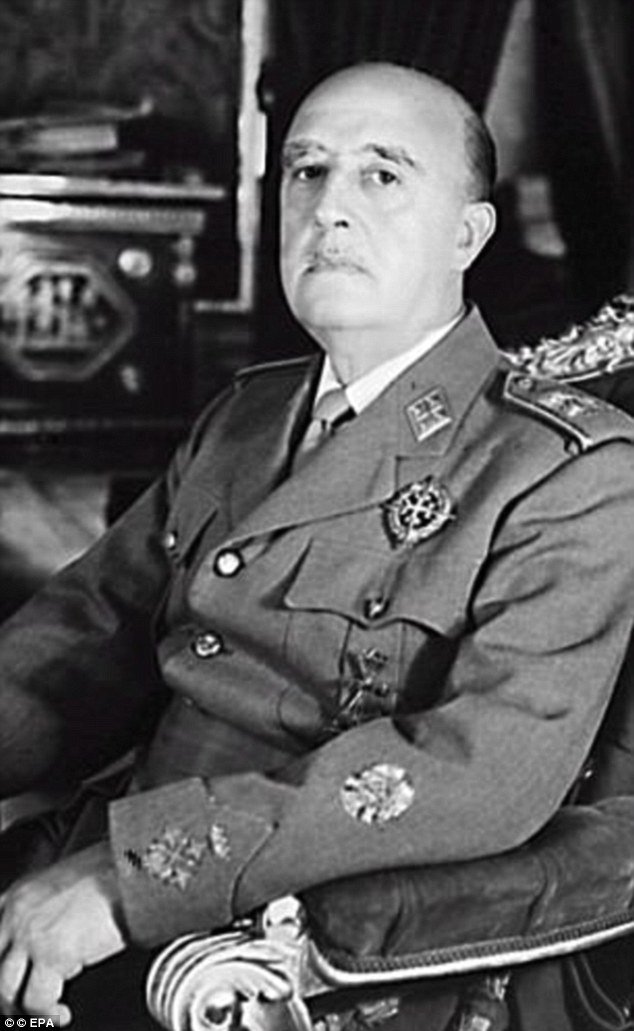 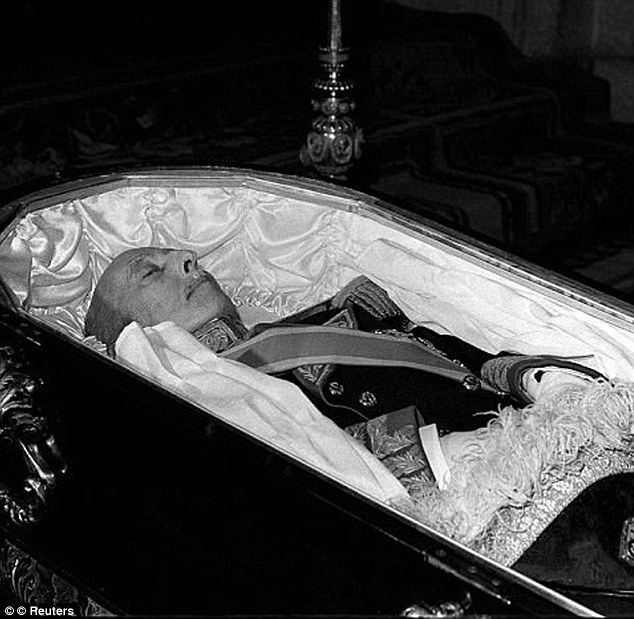 That change aims to thwart legal efforts by Franco’s descendants and supporters to block the exhumation in the courts.

Removing Franco’s remains from the Valley of the Fallen, a mausoleum he ordered built 50 kilometers (30 miles) northwest of Madrid, would be a momentous event in Spain which still bears social and political scars from the 1936-39 civil war.

The vast Valley of the Fallen complex is most conspicuous public legacy of Franco’s rule. It was built by Franco as a tribute to those killed in the 1936-39 civil war when he deposed Spain’s democratic government in what he called his ‘glorious crusade.’

Some 34,000 people from both sides of the fighting are buried at the site, most of them never identified. 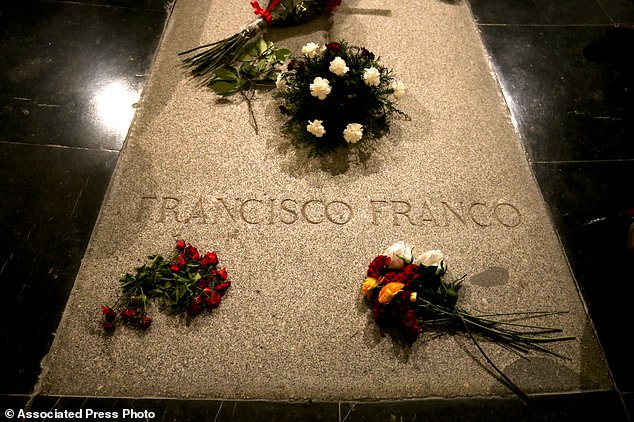 Flower are placed on the tomb of former Spanish dictator Francisco Franco inside the basilica at the the Valley of the Fallen monument near El Escorial, outside Madrid

‘Having Franco’s tomb (at the complex) shows a lack of respect … for the victims buried there,’ Calvo said. She noted that a visiting United Nations delegation said four years ago that ‘democracy is incompatible with a tomb which honors the memory of Franco.’

The Memory Law, which outlawed public events supporting the Franco regime, fell short of addressing the broad demands of civil war survivors and victims’ relatives for exhumations and reparations. 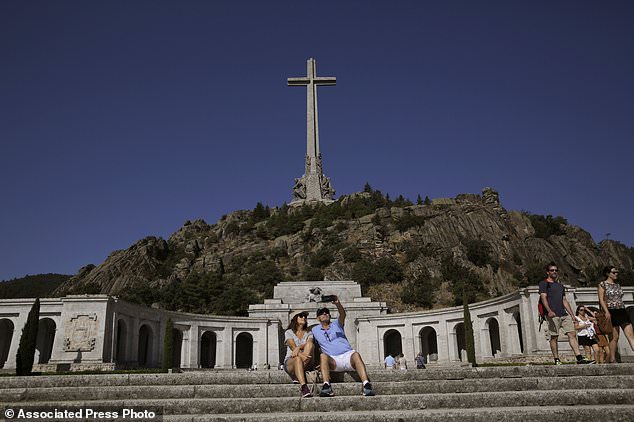 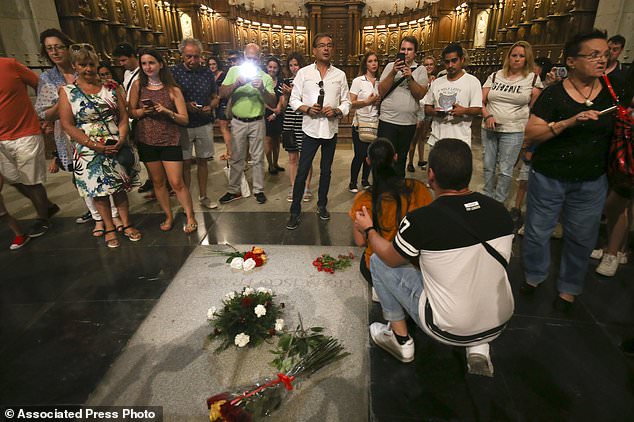 Franco’s descendants will be consulted and will have 15 days to say where they would like the remains to be placed after exhumation. If they do not reply, the government will choose a ‘dignified place,’ Calvo said after the government’s weekly Cabinet meeting.

Francisco Martinez-Bordiu, a grandson of Franco, described the exhumation plans as ‘barbaric,’ telling Antena 3 in an interview Friday that descendants would assess their legal options for halting it.

An exhumation of Franco’s embalmed body – possibly as early as October – would cement the government’s reformist and liberal credentials after taking power last June. 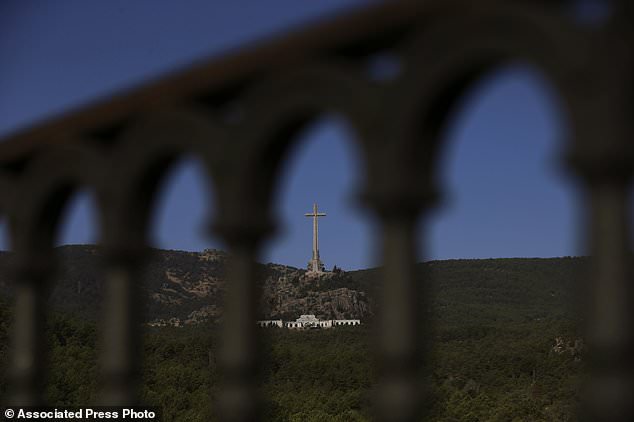 Removing Franco from the mausoleum, which is owned and operated by the cultural heritage agency, a public-funded body, has long been discussed in Spain.

Calvo said the government is fast-tracking the exhumation because it wants to ‘end a state of affairs which cannot go on any longer.’

At next Friday’s Cabinet meeting, the detailed administrative procedures for the exhumation will be set out, she said.

The Valley of the Fallen complex includes a mausoleum and basilica in a neoclassic style and is a popular pilgrimage site for people who are nostalgic for the dictatorship. It has a 150-meter (500-foot)-tall cross that can be seen from many kilometers (miles) away.

Franco, who died in 1975, is in a tomb in the basilica’s central nave beneath a 1.5-metric ton tombstone.

BRUTAL LEADER WHO KILLED UP TO 50,000 OF HIS OWN COUNTRYMEN IN REIGN OF TERROR 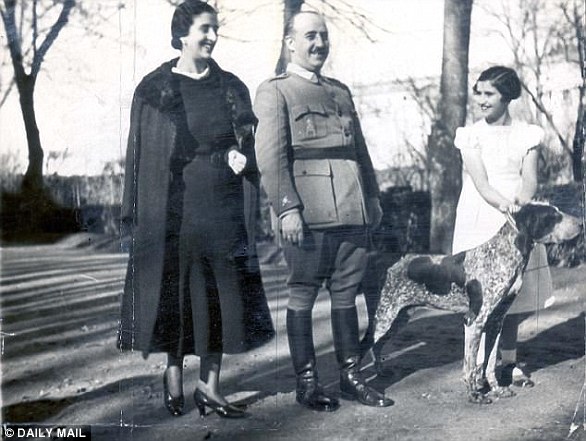 General Francisco Franco (pictured) killed up to 50,000 of his own countrymen and crushed any opposition until his death in 1975

Spain was ruled by a brutal dictator who killed up to 50,000 of his own countrymen and crushed any opposition until his death in 1975.

General Francisco Franco and his group of nationalists fought the Republicans in a brutal war between 1936 and 1939.

It was portrayed as a struggle between democracy and fascism, with Franco going on to win and rule for the next 36 years.

The Nationalist forces received munitions and soldiers from Nazi Germany and Fascist Italy, while the communist Soviet Union and socialist Mexico offered support to the Republican (Loyalist) side.

The war became known for its atrocities, with Franco purging conquered areas of any leftist opposition

It is thought that he killed between 15,000 and 50,000 people in his reign of political oppression.

Trade unions and opposition parties were banned, and thousands were forced to flee the country.