This is a generous — and dangerous — start to dinner at Sagara, opened last March in Tompkinsville, Staten Island, by husband and wife Sagara and Anuradh Hewabajgamage, natives of Colombo, Sri Lanka. Eat too many cashews and you won’t make it through the meal to come, a parade of dishes based in part on recipes that Ms. Hewabajgamage learned by watching her grandmothers in the kitchen. (“The recipes weren’t written,” she said. “I had them in my head.”)

Chief among them is lamprais, a specialty of the Dutch Burghers, mixed-race descendants of the colonists who started settling in Sri Lanka in the 17th century. In the dish’s name lies some of the tangled history of East and West: lamprais — whose pronunciation is close to “lump rise,” although some leave the P and S silent — comes from the Dutch portmanteau lomprijst, itself derived from lemper, sticky rice cakes with shredded meat inside, which the Dutch first encountered in Malaysia and Indonesia. 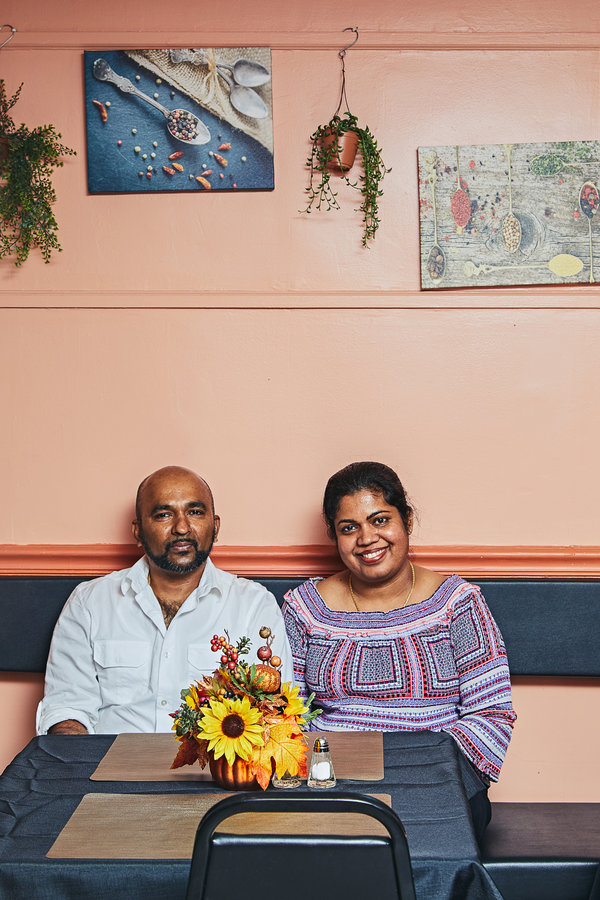 Here, what arrives is a grand parcel folded in banana leaves, with a little paper umbrella staked at one end, as if to say, “Let the party begin.” Inside is abundance: rice plumped on coconut milk and ghee and scented with rampe (pandan) and sera (lemongrass); more cashews, riled up by green chiles and given a menthol hit of fennel; ash plantains, deep-fried and evoking potatoes; eggplant gone dark and caramelly; and onions broken down with practically every spice in the larder, until they are half solid, half syrup.

Also tucked in is the curry of your choice, crowded with chicken heady from cardamom and cloves or nubs of goat plush with fat. (The best part is the runoff, to be drunk by the spoonful.) And on top: a golden orb of a fish cutlet, and a wrinkled, paunchy oval that proves to be a deep-fried hard-boiled egg, crunchy coat giving way to creamy yolk.

Elsewhere on the table might be hoppers, crepes of fermented rice flour curved like bowls, thick and spongy at the bottom with sides that get thinner and lacier as they reach up. And kurakkan pittu, small pillars of grated coconut and ragi (finger millet), to be knocked over and mixed with coconut milk and lunu miris, raw onion and chile smashed in a mortar until the heat blooms, sweet and rank at once, brightened with the faintest trace of lime.

Here too is kottu, tangled scraps of roti tossed in a wok with vegetables and curry, calling to mind fried rice. One version gets a trickledown of melted mozzarella, Cheddar and blue cheese for a happy hint of funk.

Staten Island is home to more Sri Lankan immigrants than any other borough, with a population estimated at 5,000, more than five times what it was two decades ago when Mr. Hewabajgamage first came to New York. In his early years he took many jobs, driving a taxi and commuting as far as Philadelphia for work.

In 2007, he and his wife opened a restaurant called Vidutara, half a mile from where Sagara now stands, with Ms. Hewabajgamage running the kitchen. Then their third child was born and the economy went south, and they had to shutter within the year. Now they’re trying again, this time with the help of a veteran chef, Lalith Gunasekera.

But the spirit is kind. On a recent evening, with the next ferry departure looming and Uber far in the distance, my group of offshore diners inquired hesitantly as to a local car service. Mr. Hewabajgamage sprang into action, ushering us into his S.U.V. and cheerfully reminiscing about his years as a taxi driver (“I was mugged!”).

There was no charge. We made it to the ferry with minutes to spare.