Revealed: Glamorous ‘stepdaughter’ of Russia’s war-mongering minister Sergei Lavrov paid £4.4million CASH on her London flat – as MPs call for her to be sanctioned

The stepdaughter of the Russian foreign minister has been enjoying a life of luxury based in a £4 million flat in Kensington, it emerged today as MPs campaigners called for her to be sanctioned.

Polina Kovaleva, 26, has been identified by Russian activists as the daughter of Sergey Lavrov’s mistress.

Polina’s mother is reported to be Svetlana Polyakova, 51, with whom Lavrov has had a relationship since the early 2000s and is said to be his unofficial wife.

Polyakova owns an apartment in Moscow worth £5million. She accompanies Lavrov on every foreign trip and has been on an official aircraft more than 60 times, according to the FBK, the anti-corruption foundation run by the jailed opposition leader Alexei Navalny.

She is a powerful member of the Russian foreign ministry described as ‘no ordinary bureaucrat’ in an investigation last year by the respected Organised Crime and Corruption Reporting Project (OCCRP). 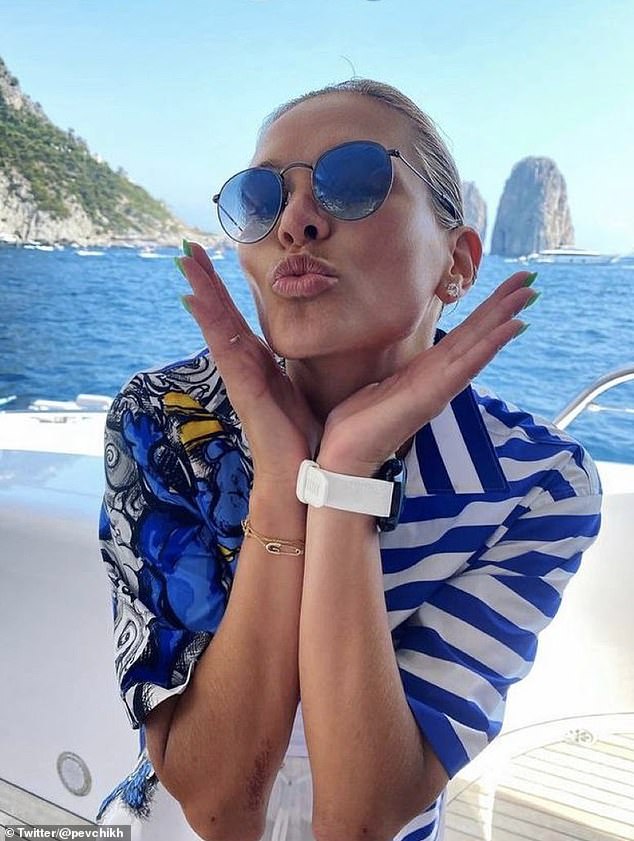 Polina Kovaleva is the stepdaughter of Russian foreign minister Sergei Lavrov, who has reportedly been in a relationship with her mother Svetlana Polyakova, 51, for two decades 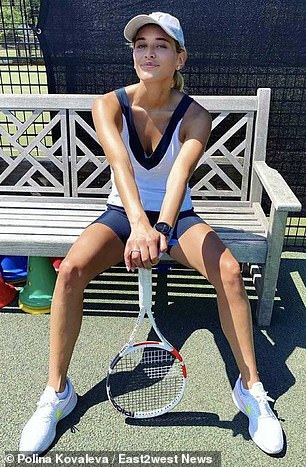 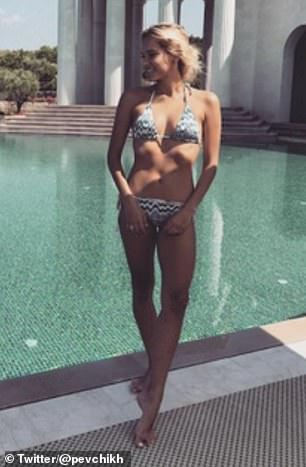 Polina (pictured) has enjoyed a gilded lifestyle in London, which one observer described as a ‘non-stop holiday’. She went to a private boarding school in Bristol before gaining a first-class degree in economics with politics at Loughborough University 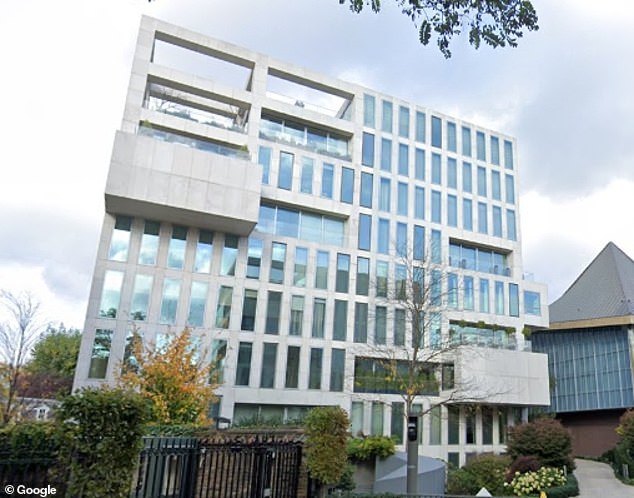 Land Registry documents show Polina purchased an apartment (pictured above) in Kensington, west London, for £4.4million with no mortgage in 2016, when she was aged just 21

Lavrov, one of Putin’s most trusted aides who was appointed in 2004, sparked fury yesterday when he refused to sanction a ceasefire in Ukraine and made the extraordinary claim that Russia did not attack Ukraine.

The 71-year-old diplomat – so admired by his boss that Putin refuses to allow him to retire – scorned the ‘pathetic outcry’ over the Mariupol hospital bombing as peace talks collapsed in Turkey yesterday.

He is sanctioned by Britain and the EU and is seen as an apologist for Putin’s bloody invasion.

Polina went to a private boarding school in Bristol before gaining a first-class degree in economics with politics at Loughborough University and later completing a master’s in economics and strategy for business at Imperial College London. 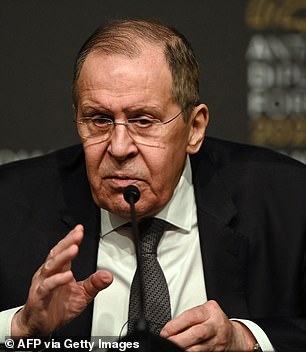 She went on to work for Gazprom, the Russian energy giant, where she helped with mergers and acquisitions and later worked at Glencore, the mining company. Before buying her own home, she lived in Holland Park, west London, in an apartment in a townhouse that is owned by the Russian embassy.

Records show that the nearby Ukrainian embassy alleged Russia had wrongly claimed ownership of the property.

Polina now lives in an apartment, which Land Registry documents state she purchased for £4.4 million with no mortgage in 2016, when she was 21, in a block just off Kensington High Street. It is still unknown who paid for Polina’s flat and her mother, who is independently rich, has not been sanctioned.

She shares the apartment with a man, believed to be her partner, who also has a 10 per cent stake in the investment company she now runs.

The property is part of an award-winning development offering a swimming pool, gym, spa, cinema, golf simulator, games room and views across Kensington and Holland Park. 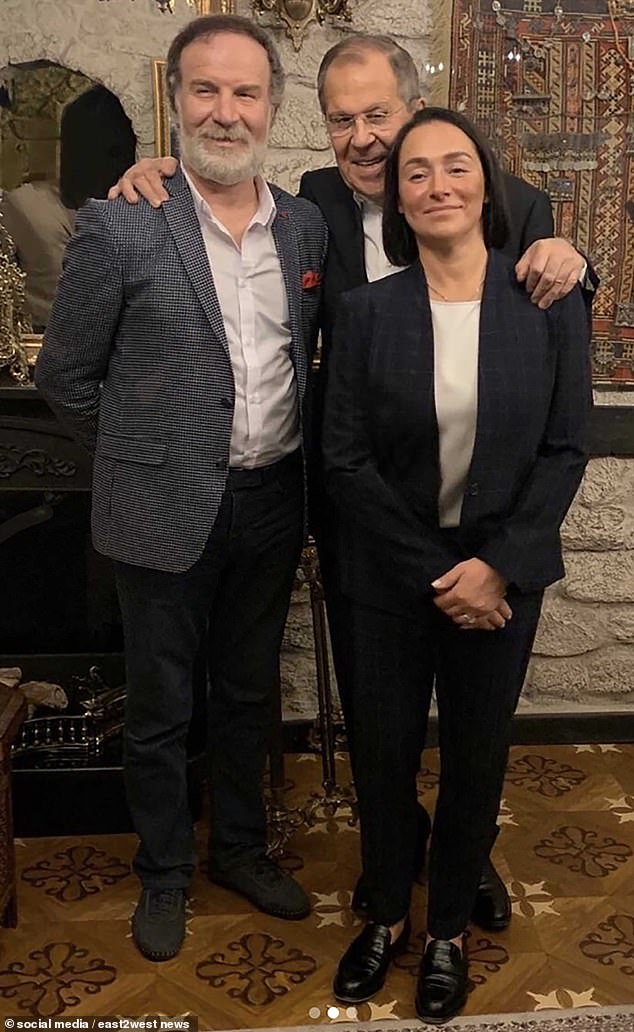 Lavrov (centre) is said to have been in a relationship with Svetlana Polyakova (right) for the past two decades. Polyakova is a powerful member of the Russian foreign ministry and is described as Lavrov’s unofficial wife. She accompanies him on foreign trips

Maria Pevchikh, the head of investigations at Navalny’s Anti-Corruption Foundation, said that Lavrov and Polyakova had been together for ‘around two decades’.

Questioning where Polina got the money to buy her apartment, Ms Pevchikh said: ‘Polina’s biological dad isn’t superrich. She doesn’t have an oligarch husband. Yet aged 21, she bought a prestigious apartment on Kensington High Street for £4.4 million, and her lifestyle is like a ‘non-stop holiday’.

Polina’s mother also enjoys ‘substantial assets’ that a Foreign Ministry apparatchik ‘would almost certainly not be able to afford.

Property records show that she and her family own real estate in Russia and Great Britain worth about 1 billion rubles.

At the time this was worth $13.6 million, although the ruble has since collapsed due to the debilitating war in Ukraine. 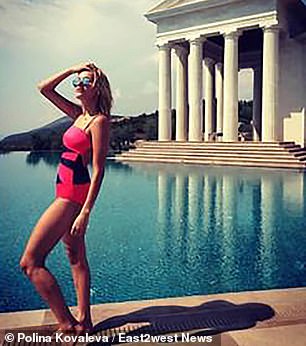 Lavrov is married to philologist wife Maria, and the couple have a daughter Ekaterina, 40, who was raised mainly in the US where he was posted as a diplomat. Despite this, Lavrov has been seen on foreign trips accompanied by Polyakova, who sometimes uses the female form of his surname, Lavrova.

Ms Pevchikh said Polyakova and her daughter should have their assets frozen along with oligarchs such as Chelsea owner Roman Abramovich and Oleg Deripaska, who were added to the sanctions list on Thursday. Her calls were backed by MP Chris Bryant.

MPs questioned why the government’s list was still dwarfed by the hundreds of individuals and entities sanctioned by the EU and the US.

Layla Moran MP, the Liberal Democrat spokesperson for foreign affairs and international development, told the Daily Telegraph: ‘The government is still way behind the EU and the US. The legislation hasn’t passed yet, so if they can act against Abramovich now, why not the others?’

Moran called for action against 35 named ‘key enablers’ of Putin in the House of Commons last month, many of whom have been sanctioned in the EU or US but not in the UK. 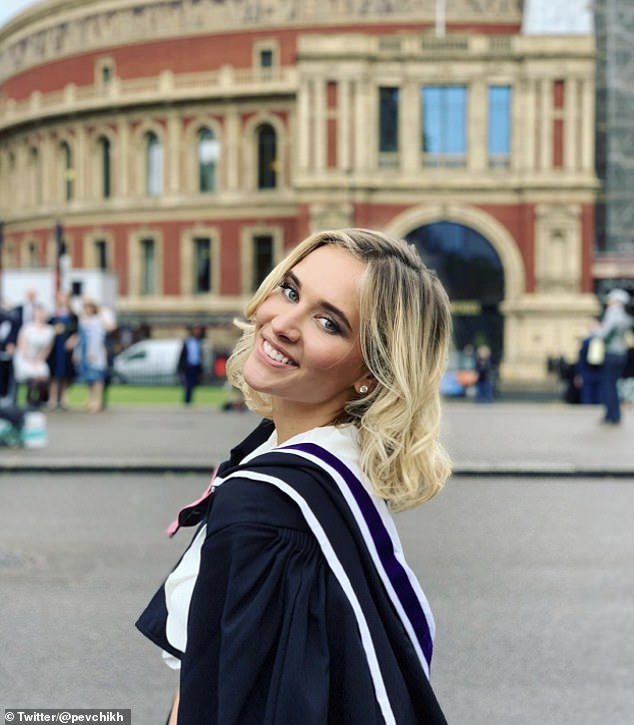 This includes Viktor Zolotov, the head of Russia’s national guard whose family is one of the richest in Russia in the real estate sector; Anton Vaino, Putin’s chief of staff; and Mikhail Mishustin, the Russian prime minister.

Moran said that officials should also look at ‘the family and friends’ of Putin’s associates, as ‘one of the ways that they get around sanctions is to transfer funds and assets to family members’.

‘They should be included in the list and ideally it should be automatic,’ she said.