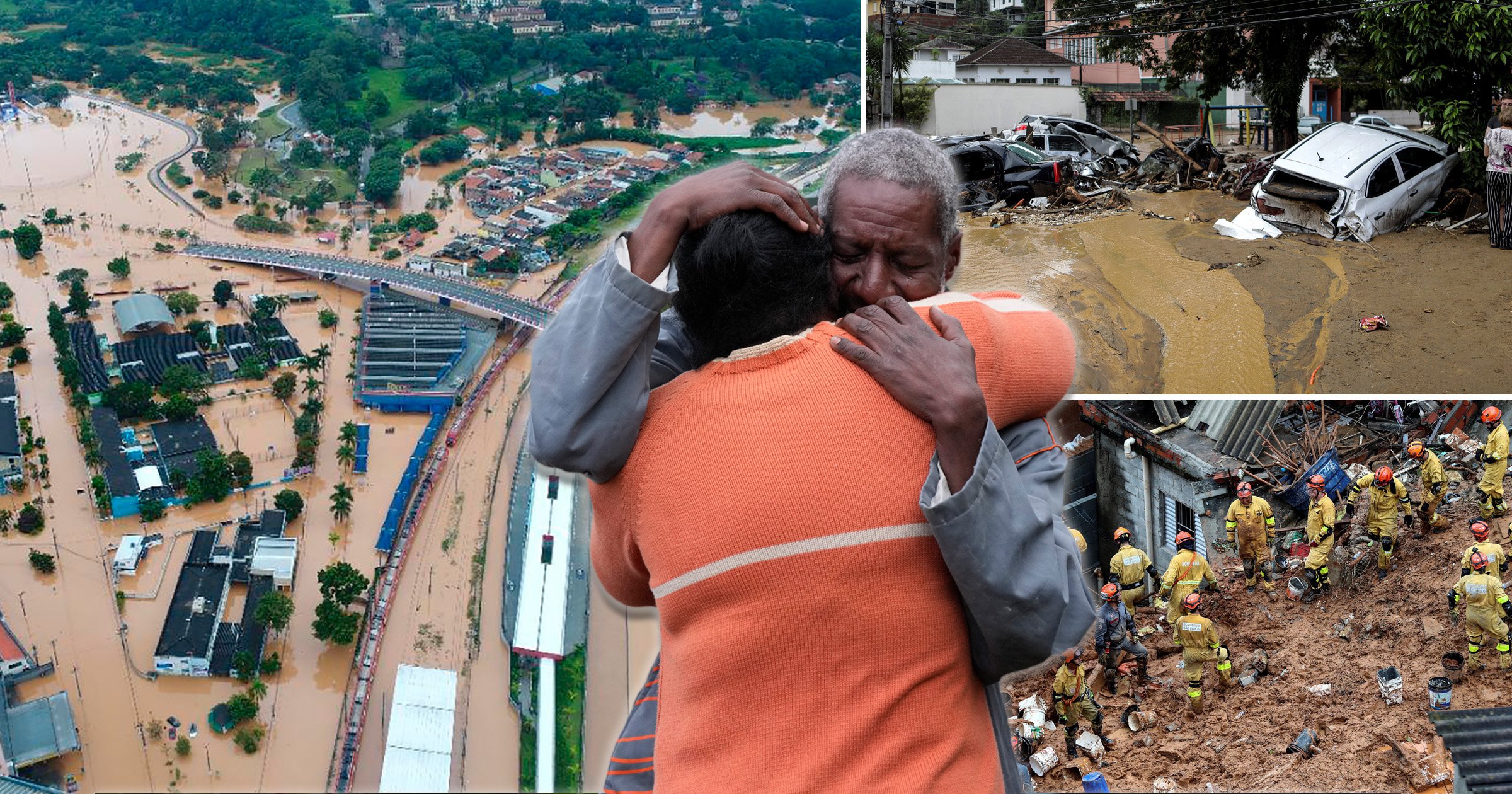 More than 100 people have died in horrific mudslides and floods which have devasted a Brazilian city.

Torrents of mud and water caused by heavy rains swept away cars and destroyed buildings in the city of Petropolis, in the Rio de Janeiro state on Tuesday.

The devasting floods were triggered when just over 10 inches (25.8cm) of rain fell within three hours – almost as much as during the previous 30 days.

Footage on social media showed water gushing through Petropolis’s streets and the awful impact the mudslides have had on the community.

One video showed two buses sinking into a swollen river as passengers desperately tried to escape through its windows.

Some did not make it to the banks and were washed away in the deadly waters.

As rescue efforts continue the number of people killed in the disaster continues to rise, with 104 confirmed dead by local authorities today.

Around 400 people are estimated to have been made homeless in the disaster, and dozens are still missing more than 24 hours after the initial deluge.

At least 180 soldiers have been deployed to Petropolis to help with rescue efforts.

So far, 24 people have been pulled from the wreckage alive but dozens remain missing and there are fears the death toll could rise further.

More rain is also expected later this week, complicating rescue efforts and adding to fears more could be affected by floods.

Local authorities say more than 180 residents who live in at-risk areas are sheltering in schools.

Rubens Bomtempo, mayor of Petropolis did not offer an estimate for the number of people still unaccounted for when he issued an update on the recovery mission.

‘We don’t yet know the full scale of this,’ he said yesterday. ‘It was a hard day, a difficult day.’

Rio de Janeiro’s public prosecutors’ office said last night it had compiled a list of 35 people yet to be located.

Governor Claudio Castro described the situation as ‘almost like war’ as he said the recent rains were the worst Petropolis has seen since 1932.

‘No-one could predict rain as hard as this,’ he said.

Petropolis, named after a former Brazilian emperor, often acts as a refuge for those escaping the summer heat and tourists keen to explore the so-called ‘Imperial City’.

Its prosperity has also drawn people from Rio’s poorer regions, but it has grown haphazardly.

The city’s mountainsides are covered in small, tightly packed together communities, many of which consist of unfit structures made more vulnerable by deforestation and inadequate drainage.

The mountain region has seen similar catastrophes in past.

More than 900 people died due to heavy rains in January 2011 which caused flooding and landslides in a large area, including Petropolis and neighbouring cities Nova Friburgo and Teresopolis.

Since the disaster, Petropolis has presented plans to reduce the risk of landslides, but work to implement them has been slow.

The plan, presented in 2017, was based on analysis determining that 18% of the city’s territory was at high risk for landslides and flooding.

Brazil’s president Jair Bolsonaro has also promised to help the region and said he would visit the affected areas tomorrow, once he is back from an official trip to Russia and Hungary.