Victorian teachers will be banned from having sex with former students for at least two years after the students finish their secondary education, under a shake-up of rules governing teacher behaviour.

The new rules, which will come into force next term, will apply to more than 135,000 registered teachers across the state, and those caught breaching them could be struck off. 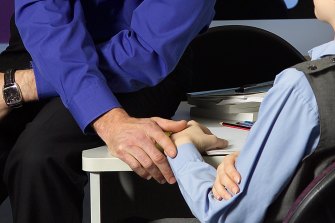 A code of conduct review raised concerns over teachers grooming students during their final years of school.Credit:Eamon Gallagher

The ban is included in a new code of conduct created by professional regulator the Victorian Institute of Teaching.

The institute was prompted to update the code for the first time in more than a decade after two inquiries into child sexual abuse – the Betrayal of Trust Inquiry in Victoria and the Royal Commission into Institutional Responses to Child Sexual Abuse – highlighted the risk of grooming by teachers.

Grooming behaviour involves a perpetrator using a position of trust to create opportunities for future abuse.

The current code prohibits relationships between students and teachers while the student is enrolled at school, but makes no mention of relationships after a student has graduated.

The institute’s review identified a gap in which teachers could groom students during their final years of school and then exploit that relationship immediately following the end of their professional relationship.

The new code warns teachers such conduct could lead to them being deregistered and brings Victoria into line with some states including Queensland, which has a similar ban in place. Teachers also risk compromising the professional relationship if they attend parties with or socialise with students.

Before adopting the new code the institute consulted more than 100 stakeholders including the Department of Education and Training, Catholic education groups, Victoria Police, the Commission for Children and Young People, parent associations, the Victorian Student Representative Council and education unions.

The Australian Education Union has questioned some of the amendments, saying in a submission to the institute that existing bans on student-teacher relationships do “not need to be further added to”. The new code was open to “varied interpretation and ambiguity”.

“To be relevant and meaningful the code must enjoy the confidence of the teaching profession,” the union said in its submission. “The level of confidence will depend upon whether the code properly respects teaching as a professional occupation and whether there is an appropriate balance between the set of standards for professional behaviour and the political, industrial and civil rights of teachers.”

A union source, speaking on condition of anonymity, said members had raised concerns about the rigidity of the code and were worried it would be used to deregister teachers without consultation or consideration of the circumstances. “It doesn’t allow for grey areas,” she said.

The new policy mirrors the Australian Psychological Society’s code of ethics, which prohibits sexual relationships between psychologists and patients within two years of terminating their professional relationship.

From July, the Victorian Institute of Teaching will use the new rules to determine whether a teacher has engaged in serious misconduct or whether there is a question regarding their fitness to teach. Any teacher found guilty of violating a professional relationship with a student, by engaging in a sexual relationship during or after that student has left the school, could have their teaching registration suspended, even if the student is over 18.

In 2019-20, the institute suspended the registrations of Victorian teachers 16 times, primarily for alleged sexual offences, mental impairment or addiction issues.

A spokeswoman for the institute told The Age the revised code provided a more contemporary reflection of the expectations on teachers.

”The code describes the behaviours that exemplify the values of the Victorian teaching profession and the community’s expectations of teachers,” she said.

“The revised code more appropriately reflects the significant role that teachers play in providing for the safety and wellbeing of children and young people, as well as the unique position of trust and influence they have over their learners.”