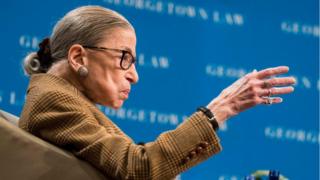 US Supreme Court Justice Ruth Bader Ginsburg has taken part in legal arguments from her hospital bed, just a day after she was admitted with a gallbladder condition.

Ms Ginsburg is expected to stay in hospital until Thursday.

As the court’s most senior liberal justice, her health is closely watched.

She has received hospital treatment a number of times in recent years, but has returned swiftly to work on each occasion.

Supreme Court justices serve for life or until they choose to retire, and supporters have expressed concern that if anything were to happen to Ms Ginsburg then a more conservative judge might replace her.

President Donald Trump has appointed two judges since taking office, and the current court is seen to have a 5-4 conservative majority in most cases.

Ms Ginsburg was treated for an inflammatory condition of the gallbladder known as acute cholecystitis on Tuesday afternoon, court spokeswoman Kathy Arberg said.

The court’s justices heard oral arguments by telephone on Wednesday due to the coronavirus outbreak. They considered a case relating to the Affordable Care Act and another relating to federal law on automated calls.

Ms Ginsburg’s voice was reported to be weaker than normal, but picked up as the proceedings went on.

She posed lengthy questions during the first case, which concerned a requirement that employers cover birth control in their health insurance plans.

President Donald Trump’s administration changed this law in 2017 and allowed employers to obtain a religious exemption, but this has been challenged in the courts.

“You have just tossed entirely to the wind what Congress thought was essential, that women be provided these services with no hassle [at] no cost to them,” Ms Ginsburg told the Trump administration’s lawyer on Wednesday.

Social media users pointed out that at one point in the call the sound of a flushing toilet could be heard, suggesting the dangers of teleconferencing can also affect America’s highest court.

Ms Ginsburg is the oldest sitting justice on the Supreme Court, and has suffered a number of recent health scares.

Last November, she was taken to hospital after suffering chills and a fever.

In August, she was treated for a cancerous tumour on her pancreas. She received treatment for colon cancer in 1999, and pancreatic cancer in 2009.

And in December 2018, she had surgery to remove two cancerous nodules from her lung. She has also suffered fractured ribs from falls.

Ms Ginsburg was nominated by President Bill Clinton in 1993 – becoming the second woman ever to join the Supreme Court.

In recent years, she has been the subject of a biopic, On the Basis of Sex, a documentary, and a bestselling book called Notorious RBG.

She has refused to retire from her role, once saying in an interview: “As long as I can do the job full steam, I will be here.”