Is he a money launderer? Suspect tries to fool cops by hiding in a DRYER

One suspect got an early taste of the cramped confines of a jail cell when he tried to hide from police by crawling into a dryer.

The Spokane Police Department in Washington posted a hilarious image on their Facebook page that showed the suspect peeking out from the machine.

Taken on a body camera, the photo shows that the man, whose name has not been released, managed to hide in a dryer that was stacked on top of a washing machine.

‘The adult version of hide and seek never turns out well for anyone,’ the department wrote in its Facebook page. 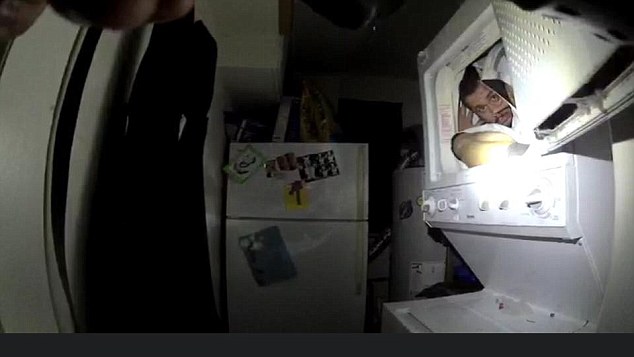 ‘What is depicted in this body camera footage frame is the lengths that some suspects will go through to avoid police.’

Spokane officers arrived at the apartment after they received a tip that a domestic violence offender might return to his victim’s home and violate a protection order.

Officers spotted the suspect, who ran into the apartment and refused to come out.

But his hiding skills were no match for one K9 named Murphy, who discovered his spot and helped get him behind bars.

No one was hurt during the incident.

The department’s Facebook post is now going viral, with many taking the opportunity to show off their best laundry jokes.

‘I’ll bet he now has a laundry list of charges! He’s totally washed up now,’ one user wrote.

‘Well he won’t feel cramped in a jail cell,’ another quipped.

‘He could have avoided charged with Bounce no static cling sheets.’