Australia’s top scientists have called for a research integrity watchdog to oversee investigations into allegations of research misconduct at publicly funded institutions, declaring the age of self-regulation is over.

The Australian Academy of Science is in discussions with the government over its proposal for a national oversight body to work with any institution that has used public funds to conduct research, including universities, think tanks and the private sector, following a spate of academic research scandals. 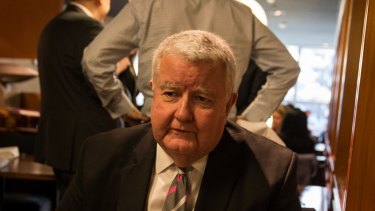 Ian Chubb is agitating on behalf of the Australian Academy of Science for a national oversight body on research integrity.Credit:Edwina Pickles

It would have statutory authority to handle allegations of serious research misconduct such as fabrication, falsification and plagiarism, leaving issues that fell below that threshold to the governing institutions, and hear appeals if the institutions were deemed not to have dealt with matters fairly or in a timely manner.

The academy’s secretary of science policy, Ian Chubb, a former chief scientist and vice-chancellor of the Australian National University, said he was not suggesting universities were in the business of concealing research misconduct, but the rising number of Inspectors-General and Ombudsmen reflected a general distrust for self-regulation and growing support for independent oversight.

“The era of self-regulation is further in the past than you might like to believe,” Professor Chubb said. “We’re proposing that there be an Australian system for investigating research misconduct that has some real substance to it.”

The academy has engaged Universities Australia, which represents Australia’s 39 universities and has given in principle support to the proposal.

“Universities Australia is actively interested in how the quality and integrity of Australian research can be secured and improved,” chief executive Catriona Jackson said.

Australia and New Zealand are unusual among Western nations for not having an office of research integrity, a version of which exists in the UK, Japan, China, Canada, the United States and 23 European countries.

The proposal for a national oversight body follows a string of allegations regarding image manipulation in scientific papers that have embroiled UNSW, the University of Sydney and Macquarie University and the referral of one of Australia’s top cancer scientists to Queensland’s Crime and Corruption Commission.

But scientists have been trying to promote an office of research integrity for years. In late 2017, it was discussed at a meeting that involved representatives from the Australia Research Council, the National Health and Medical Research Council, the Chief Scientist and the office of Health Minister Greg Hunt. People with close knowledge of the meeting said although major research bodies supported the proposal, it was actively opposed by Universities Australia and later shelved.

Professor Chubb said the current model was developed after fellows of the academy raised the issue in May last year. Cases would have to be triaged so the office would only handle the most serious matters, and it was expected to cost around $5 million, though it was uncertain how many cases would emerge.

Among those who raised their concerns was University of Melbourne scientist Peter Brooks, who was commissioned by UNSW in 2013 to investigate a complaint of research misconduct against a senior researcher.

“The terms of reference were incredibly tight, so we couldn’t deviate from those,” Professor Brooks said.

Professor Brooks concluded the professor had committed misdemeanours that fell short of research misconduct, but unearthed other issues during his investigation that the university chose to refer to separate committees, none of which were allowed to make findings about a pattern of behaviour.

“It was a very, very disappointing and unfortunate situation,” Professor Brooks said.

Each of the five committees cleared the professor of research misconduct, finding the breaches were the result of genuine error or honest oversight. UNSW said in a statement the findings were later considered together by a further external independent panel and still found not to constitute research misconduct.

Professor Brooks, who has conducted several investigations into academic misconduct, said the tertiary education system was so reliant on overseas students and research funding that universities could ill afford to lose senior researchers.

At the same time, there were financial and career incentives to researchers who publish prolifically or publish in journals that are classified as high impact. This created conditions for academics to perform sloppy or even fraudulent research. Other scientists then read the papers and spend years trying to reproduce the experiments or develop them further.

“The opportunity costs are enormous because that costs money that could have been used for legitimate research,” Professor Brooks said. “And often they’ve been funded by the National Health and Medical Research Council, so it’s a really serious issue.”

Simon Gandevia, a senior scientist at Neuroscience Research Australia who has also been agitating for an office of research integrity, said the system was not working.

“The system in which academic misconduct is dealt with in-house is inappropriate and we need a transparent system where we know who is being investigated and what they are being investigated for, and an external body is what we need for that.”

The process of investigating an academic for research misconduct can be expensive and legally fraught for universities. Allegations of scientific misconduct against UNSW Professor Bruce Hall in 2001 took more than two years and four separate inquiries to resolve, with lawyers involved at every step. Professor Hall was found guilty of misconduct but vice-chancellor Rory Hume allowed him to keep his job. However, Professor Hume’s handling of the matter was heavily criticised, and he resigned under pressure from the council in 2004.

There is also a perception among academics that correcting the record might damage their reputation, as cellular genomics researcher Joseph Powell found in 2014. The then University of Queensland researcher discovered after one of his papers had been published in Nature that the statistical test he had used — a standard methodology — gave a higher than expected false positive rate, and asked the journal to retract the paper. Nature then published the new results.

But the decision to retract was not unanimously accepted by his co-authors. One felt a retraction would unduly punish the team when they had acted in good faith.

“It was a really challenging scenario for us,” said Professor Powell, who now works at the Garvan Institute for Medical Research. “At the time I was an early career researcher and there was a potential that this would have a damaging effect on my reputation. But interestingly, it’s been almost the exact opposite. I’ve had a lot of colleagues reach out and show enthusiasm and I’ve not had one negative reaction.”

Professor Chubb said the national oversight body would still allow people to make mistakes, but it would sort out genuine errors from serious misconduct. It would also be responsible for issuing sanctions, either to the individual or to the institution if it did not take the recommended action. Institutions that chose not to join would lose public funding.

Professor Brooks said it was incumbent on the universities to accept an independent commission for research integrity.

“The risk is, just like if politicians keep lying and don’t show any integrity, we start not to take any notice of them,” Professor Brooks said. “It’s a great shame. That would be awful if people start not to believe science. We’ve seen what happens when that occurs, with anti-vaxxers.”

Fascinating answers to perplexing questions delivered to your inbox every week. Sign up to get our new Explainer newsletter here.