Police searching for the body of Suzy Lamplugh, who has been missing for 32 years, have started digging up the former back garden of the prime suspect’s mother.

Estate agent Miss Lamplugh, 25, disappeared in 1986, having left her west London offices to meet a mystery client known only as Mr Kipper.

When she didn’t return a huge police search was launched but no-one was convicted over her death and in 1994 she was officially declared dead, presumed murdered. 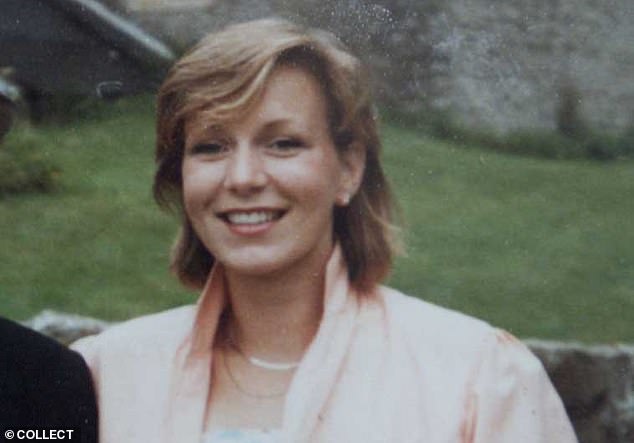 Estate agent Miss Lamplugh, 25, (pictured) disappeared in 1986, having left her west London offices to meet a mystery client known only as Mr Kipper 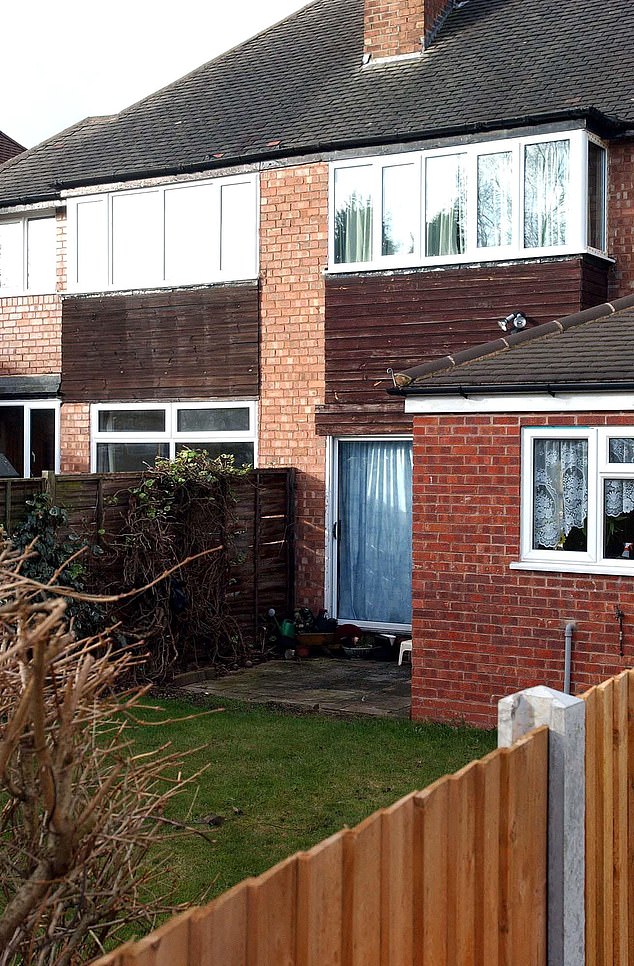 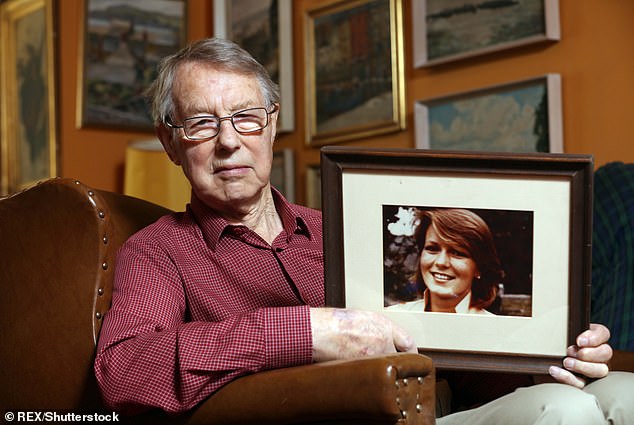 Paul Lamplugh, posed with a photo of his daughter Suzy in February 2013, he sadly died before finding out who killed his daughter 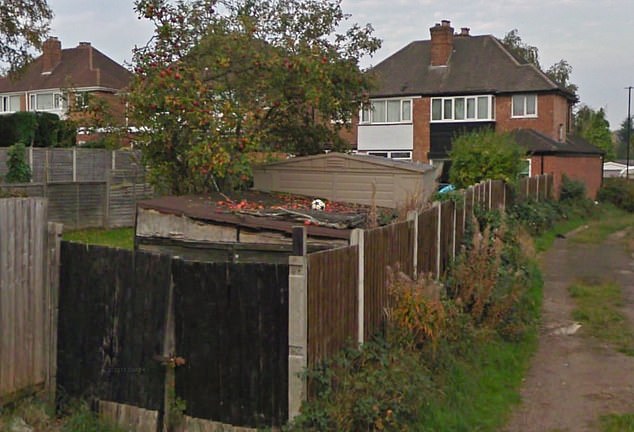 Police have been searching the area around the iron corrugated structure, picture above behind the gates to the property 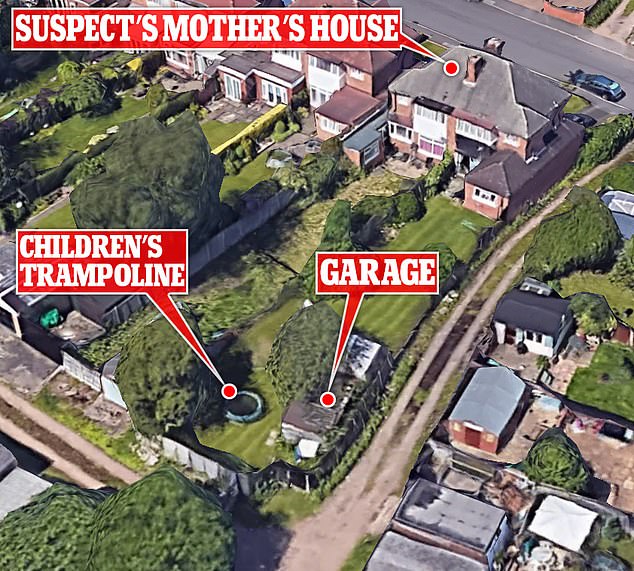 Police have been busy searching the old iron corrugated garage at John Cannan’s mother Sheila’s former home. The search took place just metres away from a child’s trampoline and other play equipment

It is one of Britain’s most high profile murder mysteries, with prime suspect John Cannan questioned numerous times about the murder, but has always denied involvement.

But now police are hoping for a fresh breakthrough in the case, and suspect Cannan might have driven to his mother’s home to hide the body.

They have set up a forensic tent in Sutton Coldfield, West Midlands, which is the former home of prime suspect John Cannan’s mother, according to The Sun. 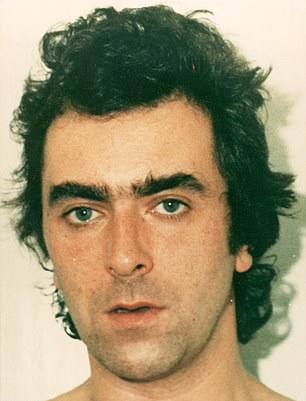 A team of a dozen officers armed with shovels and garden thoughts are thought to be conducting the search, with permission from the current home owners.

They started by inspecting an old iron corrugated garage Cannan is thought to have used when working on cars, and later filled in with concrete.

The search for her body took place only yards from a child’s trampoline and other play equipment.

Ground penetrating radar is also thought to have been used on the area and the search is expected to last for several days.

The police are thought to be conducting a full scale investigation into her abduction and murder after receiving new information.

It is believed his mother Sheila, thought to be in her 80s, now lives in a different part of the country.

There is no suggestion she is involved or knew anything about his crimes.

At the time witnesses had seen a woman struggling with a man next to a BMW, which Cannan was believed to have had access to.

In a rare move in 2002, Scotland Yard named Cannan as the man they believed murdered Miss Lamplugh.

He was released from a hostel only days before she went missing. 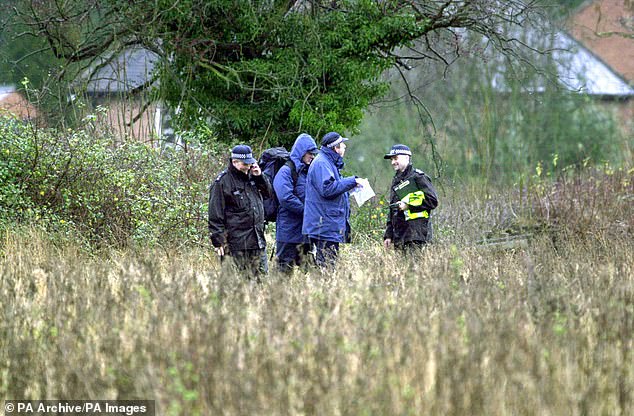 Detectives from the Metropolitan Police searching the ground near Norton Barracks, Worcestershire, in 2001 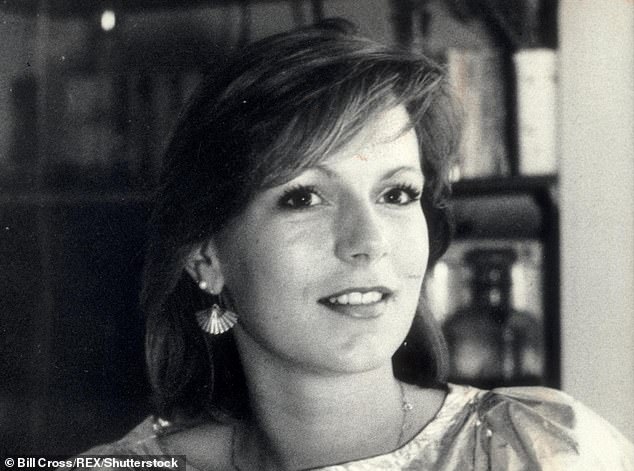 When Suzy Lamplugh (pictured) didn’t return home a huge police search was launched but no-one was convicted over her death and in 1994 she was officially declared dead, presumed murdered

Cannan, 64, is serving three life sentences for murder and a series of sex attacks, has denied any involvement.

In 1989, he was jailed for life for the murder of Bristol newlywed Shirley Banks and the rape of a woman in Reading.

The case against Cannan has always been undermined by a lack of forensic evidence and the location of the body.

‘We will not be commenting on speculation surrounding the search, or providing any further information at this time.’

A team of 12 officers spent two days digging next to a disused brickworks at Norton Barracks, near Worcester, in 2001. 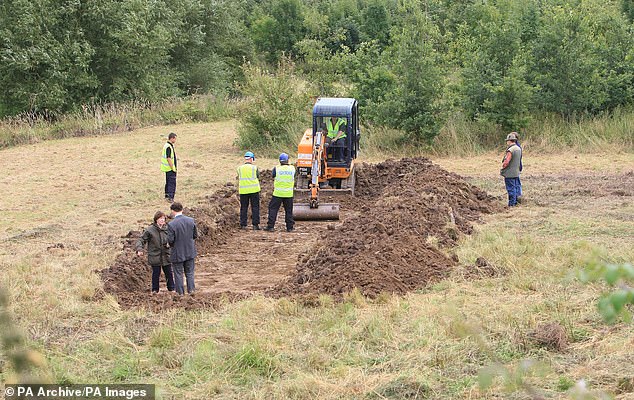 Police search a field next to the B4084 in Pershore, Worcestershire, looking for Suzy Lumplugh in 2000 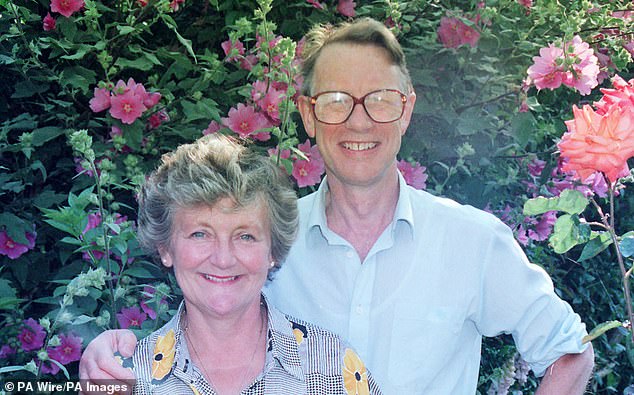 Diane and Paul Lamplugh, parents of estate agent Suzy Lamplugh, sadly died before finding out who murdered their daughter

Suzy’s parents Paul and Diane Lamplugh both died without ever finding out what happened to their daughter.

The couple, from East Sheen, South-West London, set up the Suzy Lamplugh Trust in 1986 to ‘campaign, educate and support people to help reduce the risk of violence and aggression for everyone’.

Mr Lamplugh, last spoke out about his daughter’s apparent murder in 2016.

He said: ‘The older I get the more I miss her’ – but also admitted he ‘had to accept’ the ‘awful’ realisation she was killed deliberately and he would probably never know who did it.

The prime suspect in the Suzy Lamplugh case is John Cannan, a serial rapist and killer.

Cannan has a long history of violent sexual attacks on women and three days before Suzy vanished he was given day release after serving five years for rape.

It later emerged that in jail he was known by other inmates as Kipper, the name of a mystery man Suzy met the day she vanished.

The former car salesman also had access to a BMW of the type thought to have been driven by ‘Mr Kipper’ and resembled a photofit of a man seen with Suzy.

She had complained of being pestered by a man from Bristol, Cannan’s home city.

He has been questioned several times in prison about Suzy’s murder but denies any involvement.

Out of the tragedy Suzy’s family fought to protect other women from violence through the foundation in her name.

Generations of freshers at universities were handed free rape alarms – known as ‘Suzy Lamplugh Alarms – and they fought for more street lights on the streets of Britain to protect women.

Who is Suzy Lamplugh? Timeline of how the estate agent vanished after going to meet a man named ‘Mr Kipper’ 32 years ago

Suzy Lamplugh, 25, disappears after leaving her office to show a man known only as ‘Mr Kipper’ around a house in Fulham, west London.

Her white Ford Fiesta is found parked outside a home for sale in Stevenage Road, which is a couple of miles from her appointment in Shorrolds Road.

The missing woman’s parents Paul and Diana Lamplugh set up a charity in their daughter’s name, called The Suzy Lamplugh Trust.

Officers carry out DNA testing on 800 unidentified bodies in a bid to identify that of Suzy, but no matches come back.

The police inquiry is officially closed due to a lack of evidence or leads. The file remains open, however.

Police conduct their first interview with John Cannan, who is serving three life sentences for murder and a series of sex attacks.

His prison nickname is revealed to be Kipper. However police are unable to link any evidence to him, despite his girlfriend’s suspicions that he is involved.

A young woman’s body is found in Mendip Hills, Somerset, but it is quickly discounted as being that of Suzy.

Suzy Lamplugh is officially declared dead by the police.

The Protection from Harassment Act is passed in the Houses of Parliament, thanks in part to the work of the Suzy Lamplugh Trust.

Police spectacularly announce the case is to be reopened due to the tracing of a car that may be linked to the case.

Later in the year, officers arrest John Cannan and interview him once again, but he is not charged.

In an unusual move, police reveal Cannan to be their ‘only suspect’ in the case, but it is said that there is not enough evidence to charge him.

Steve Wright, who murdered five prostitutes, is linked to the case, but no evidence links him to the crime expect that he worked with Suzy in the 1980s aboard the Queen Elizabeth 2 cruise ship.

In 2008 it emerged that the wife of Suffolk Strangler Steve Wright said he could have claimed missing estate agent Suzy Lamplugh as his first victim.

The Ipswich based truck driver murdered five prostitutes in a six-week frenzy in 2007. 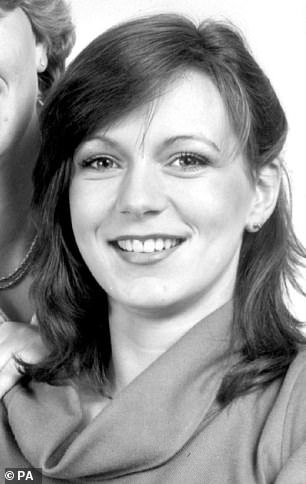 His ex-wife Diane Cole revealed the extraordinary links between the former QE2 steward and Miss Lamplugh , who worked on the luxury liner as a beautician.

Mrs Cole checked her diaries to discover that her former husband, who was violent towards her, had shore leave around the time of 25-year-old Miss Lamplugh’s disappearance on July 28, 1986. She has given full details to police.

Mrs Cole, who also worked on the QE2, said: ‘I knew Suzy Lamplugh by sight. I saw him talking with her in the corridor. I was too downtrodden to challenge him about it then because he was such a Jekyll-and-Hyde character and you never knew when he would flip.

‘But when I look back I can see how he was probably flirting with her.’ She added: ‘I really want him to tell us if he killed her for my peace of mind – for her family’s sake.’

Mrs Cole added: ‘I’m sure Steve used the word ‘kipper’ as slang for face. He used to say, ‘What’s up with your kipper?”

Fellow QE2 shipmate Paul Tennant, a former waiter, said Wright ‘tried to become a friend of Suzy’s all the time’, while another former crew member, Steve Adler said: ‘Steve would sniff around all the girls and particularly the beauticians such as Suzy.’

What is the aim of The Suzy Lamplugh Trust?

Paul Lamplugh was handed an OBE along with his wife Diana after setting up the Suzy Lamplugh Trust in 1986.

The personal safety charity helps thousands of people in Britain every year and was set up because Mr and Mrs Lamplugh were desperate for others to ‘stay safe’ after Suzy vanished.

In its mission statement, the trust said it aims ‘to reduce the risk of violence and aggression through campaigning, education and support’.

Out of the tragedy Suzy’s family fought to protect other women from violence through the foundation in her name.

Generations of freshers at universities were handed free rape alarms – known as ‘Suzy Lamplugh Alarms – and they fought for more street lights on the streets of Britain to protect women.

In 1997, the Protection from Harassment Act was passed thanks in part to the work of the trust.