Sweden’s former top virus expert has launched a blistering defence of the country’s coronavirus strategy, saying that lockdowns are merely delaying an inevitable surge in cases and deaths – not preventing it.

Johan Giesecke says attempts to stop the spread of the disease are ‘futile’ because everyone is likely to be exposed to it before a treatment can be found, meaning all countries will end up in a similar position regardless of what measures they took.

Mr Giesecke predicts that the numbers of infections and cases in Denmark, Norway and Finland – which went into full lockdown – will rise to match those of Sweden – which didn’t – as restrictions are eased in the coming weeks.

Meanwhile New Zealand, which has managed to heavily suppress the virus with its lockdown, is now at risk of importing cases from overseas, he says.

The only way to mitigate that risk would be to quarantine all new arrivals for 14 days, with the measure remaining in place for as long as it takes to find a vaccine. 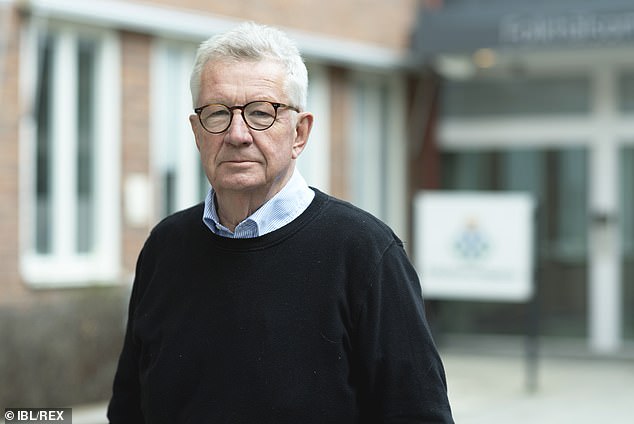 Johan Giesecke, Sweden’s former top virus expert, believes lockdowns in place around the world are merely delaying a wave of coronavirus – not preventing it

That could take a decade or more, he told Swedish newspaper DN, with the effectiveness of such vaccines as-yet unproven.

In the face of such uncertainty, it is better to let the virus run its course provided infections can be suppressed enough to stop hospitals being overwhelmed, he said.

Mr Giesecke spoke out as Sweden’s current top virus expert Anders Tegnell came under fire for refusing to recommend a lockdown, despite the country’s number of cases and deaths soaring well above its Nordic neighbours.

Sweden has reported 25,265 cases of coronavirus and 3,175 deaths, a figure which the country’s US ambassador has admitted is a ‘big failure’.

By comparison, Norway has reported just 8,034 cases and 217 deaths, far outmatching Sweden even when differences in population size and density are taken into account.

Denmark and Norway have now announced an end to their lockdowns, with Norway allowing private gatherings of 20 people and public gatherings of up to 50 people from Monday provided social distancing remains in place.

May 11 will see schools and colleges reopen across the country provided infection rates stay down, while bars and amusement parks will follow suit on June 1.

Final restrictions will then be lifted on June 15, with gatherings of up to 200 people allowed, gyms and fitness centres reopened and the football league restarted. 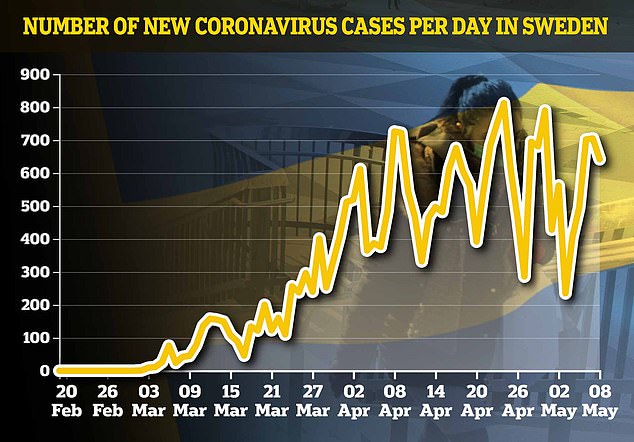 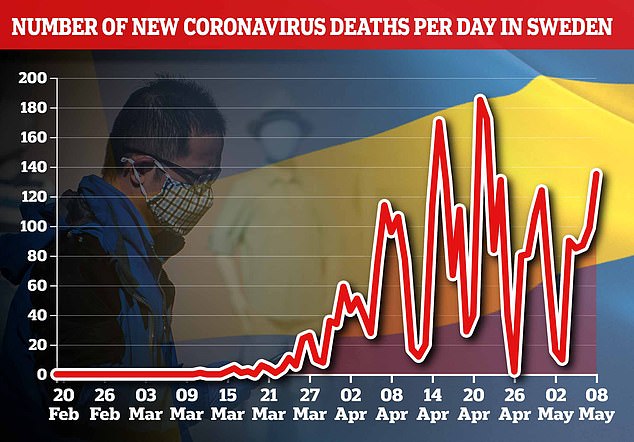 Sweden has also seen its daily death totals rise, prompting criticism of the government’s relaxed approach. In total, more than 3,000 have died (pictured, a graph showing the daily death total)

Meanwhile in Denmark, shopping centres will reopen from May 11, while restaurants, places of worship and schools for 11- to 15-year-olds resuming a week later.

Most office workers will be allowed to return to work as soon as their workplace meets social distancing and hygiene regulations.

Mr Giesecke argued it is now only a matter of time before both countries have infection and death totals to rival Sweden.

Writing in The Lancet, he predicted that ‘everyone will be exposed to [the virus] and most people will become infected’ because of how contagious it is.

While conceding that flattening the curve of infection is important to stop hospitals being overwhelmed, he said the goal should not be to stop the spread entirely.

‘There is very little we can do to prevent this spread,’ he said. ‘A lockdown might delay severe cases for a while, but once restrictions are eased, cases will reappear. 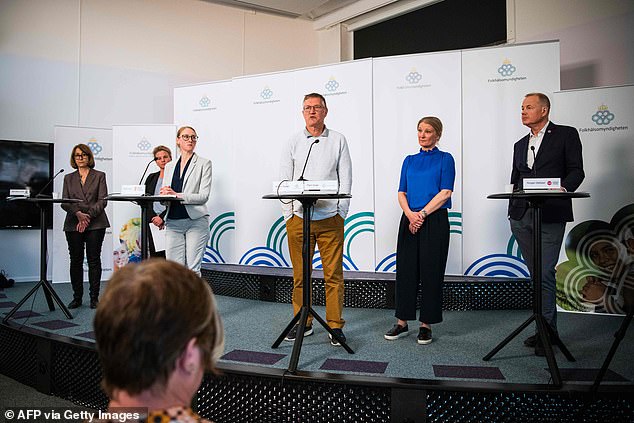 Ander Tegnell, Sweden’s current top virus expert, has admitted some mistakes in his strategy – but said refusing to go into lockdown isn’t one of them

‘I expect that when we count the number of deaths from COVID-19 in each country in one year from now, the figures will be similar, regardless of measures taken.’

In conclusion, he argues: ‘Our most important task is not to stop spread, which is all but futile, but to concentrate on giving the unfortunate victims optimal care.’

In a follow-up interview with Swedish newspaper Dagens Nyheter, he used the example of New Zealand to illustrate his point.

The country has been widely praised for its coronavirus response after suffering just 1,490 cases and 21 deaths from the virus.

Prime Minister Jacinda Ardern has now begun easing lockdown measures, but Mr Giesecke argues that the country is still at risk from cases imported from elsewhere.

The only way to prevent that would be to quarantine all visitors for 14 days on arrival, a measure that would have to remain until a vaccine is found.

And, he points out, there is no conclusive proof that catching coronavirus provides lasting immunity from the illness – meaning vaccines could prove ineffective. 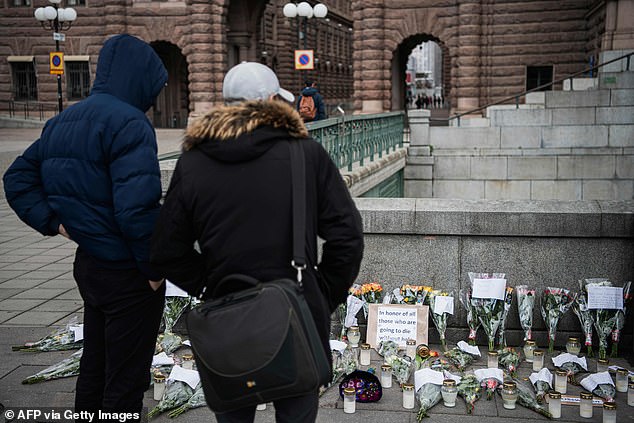 People in Sweden have grown increasingly impatient with the government’s light-touch approach, but Mr Giesecke has fiercely defended it 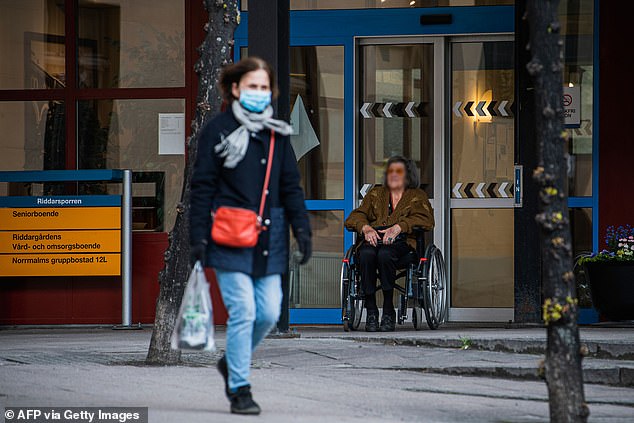 Sweden has seen up to 90 per cent of its coronavirus fatalities in care homes (pictured), with Mr Tegnell admitting more should have been done to protect the old

His comments are borne out by China, which was the first country in the world to adopt strict lockdown measures as the virus spread there early this year.

While the country claimed to have dropped its daily infection rate to zero thanks to the measures, it has seen periodic clusters of new cases which have been imported from overseas.

Mr Giesecke also used the examples of Spain, Italy and the UK – which have the highest death tolls in Europe – as an example of why lockdowns are ineffective.

More than a third of the world’s population is thought to have been placed under some kind of lockdown as the virus sweeps the globe.

Some 3.8million cases of the virus have been diagnosed while in excess of 270,000 people have died from it, though these numbers are thought to be under-estimates.

Europe has long been the epicentre of the disease, with more than 1.6million cases and 150,000 deaths, though that grim designation now appears to be shifting across the Atlantic to the Americas.

More than 1.5million cases have been reported there, along with 85,000 deaths, largely in the USA.