UK’s lockdown IS working: Symptom-tracking app says 500,000 FEWER Britons have tell-tale coronavirus symptoms this week – as ministers say it is still too early to lift the strict measures

The number of people with coronavirus symptoms has plummeted since the UK’s lockdown started two weeks ago, according to scientists.

A team of researchers at King’s College London, who developed the COVID Symptom Tracker app, say the number of people reporting symptoms has dropped.

Latest analysis from the app, which has been used by more than two million people, estimates that there are now around 1.4million with symptomatic coronavirus in the UK.

This is a drop from a projected 1.9million on April 1 and the scientists called it ‘really encouraging’.

And its first analysis on March 26 had suggested around one in 10 people were ill with, or had already had, COVID-19 – which could have worked out as some 6.6million people.

The significantly lower estimate since then suggests that people staying at home, after the Prime Minister’s speech on March 23, is starting to slow the outbreak down.

But officials in all corners – including Foreign Secretary Dominic Raab and the World Health Organization – have said it is too soon to even think about lifting the social distancing measures.

It will take at least another week for any effects of the lockdown to filter through to hospitals, Sir Patrick Vallance, the UK’s chief scientific adviser, said yesterday. 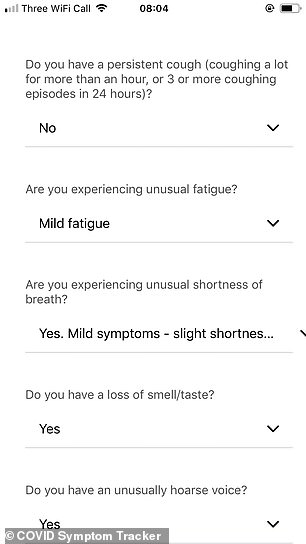 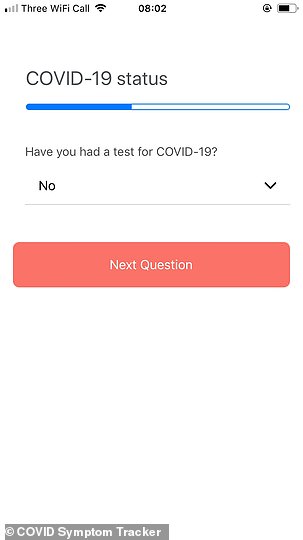 The COVID Symptom Tracker works by taking people through a questionnaire about how they are feeling and whether they have the typical symptoms of coronavirus. Currently, tests are mostly being rationed to people who are in hospital 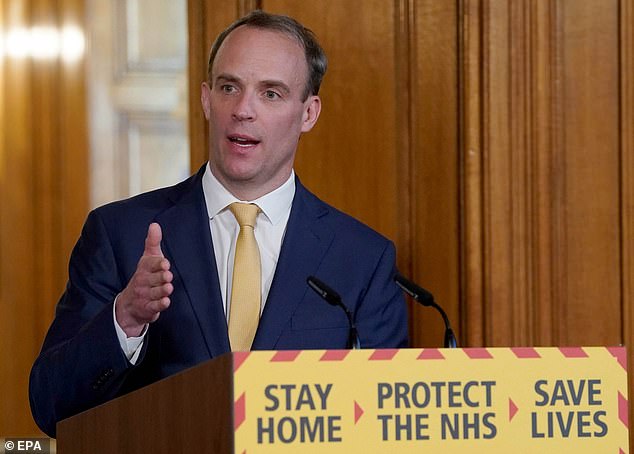 Foreign Secretary Dominic Raab, who is standing in for Prime Minister Boris Johnson while he’s in hospital, yesterday said the UK must not take its foot off the pedal and people must continue to stay home

The COVID Symptom Tracker app works by members of the public filling out forms which describe their health and ask about possible coronavirus symptoms.

Healthy people, those who think they might have COVID-19, and those who have been officially diagnosed are all encouraged to take part in it.

One of the app’s developers, Professor Tim Spector, said: ‘It is really encouraging to see that the rate of new symptoms being reported is beginning to fall.

‘Even though hospital admissions and deaths are still on the rise, we hope that these figures offer a much needed light at the end of the tunnel.

‘The altruism of the UK public combined with modern technology is allowing us to rapidly collect huge amounts of invaluable data to help us better understand this deadly virus.

‘We would like to take this opportunity to thank every single person who is already participating and would urge everyone else to download the app and check in every day, whether you are experiencing any symptoms or feeling fine.’

People living in the Chinese city where coronavirus first emerged were permitted to leave for the first time since it was locked down almost three months ago, despite fears infections could rise if restrictions are eased too quickly.

China sealed off the city of Wuhan on January 23, when it became apparent the deadly COVID-19 virus was out of control there.

But at 00.50am on Wednesday, trains carrying people out of the city began running, and major highways also began opening up as China’s lockdown on Wuhan was lifted.

Wuhan has a population of some 11 million people. Of those, more than 50,000 people have been infected with coronavirus and 2,571 have died.

The death toll accounts for around 80% of all fatalities in China, according to official figures.

At the height of the outbreak, Wuhan’s lockdown saw citizens forced into their homes by authorities.

And transport hubs and streets were desolate except for police patrols and emergency workers.

But restrictions in the city have dropped off in recent days as new infections significantly fell.

Health officials are still encouraging people in Wuhan to not leave their neighbourhoods, the city, and the wider Hubei province, unless absolutely necessary.

Tall barriers remain in place around housing compounds and people are only permitted to leave if they have a green health code or are carrying documents stipulating a valid reason.

Professor Spector and his colleagues say that hospital admissions and deaths should start to fall in about two weeks as long as social distancing continues.

They believe the two week lag is caused by the delay between symptoms starting and becoming very severe.

This data fits in with what has been reported by NHS digital, which has reported a decline in the number of calls to NHS 111 regarding COVID-19 since the 22 March.

Daily numbers of new patients also appears to be levelling off, despite more people being tested than in the earlier stages of the outbreak.

There were 3,634 more positive tests announced yesterday – the lowest number for a week and a 40 per cent drop from the peak of 5,903 on Sunday.

The daily death rate hit a new record high at 786 yesterday, however, as people continue to die and confirmations filter through from the past fortnight.

Falling numbers of new cases is promising, officials say – Sir Patrick Vallance said it could be ‘the beginning of change’ for the UK’s outbreak, but must not lead people to relax.

Dominic Raab, who is standing in for the hospitalised Prime Minister Boris Johnson, said at yesterday’s televised briefing: ‘We will take any decision when the time is right, based on the facts and the scientific and medical advice.

‘Our number one and overriding focus right now is on conveying the key message which is that everyone needs to keep adhering to this guidance.

‘There is a long Easter bank holiday weekend coming up, warm weather and we understand people are making big sacrifices to follow this guidance.

‘It is helping, it is contributing to our ability to tackle the coronavirus. The worst thing now would be to take our foot off the pedal, to ease up on that and risk losing the gains that have been made.

‘It is absolutely critical that people keep up that discipline and the vast majority will. We hope everyone will follow that example.’

Downing Street today confirmed that the lockdown would not be reviewed next week and that it will continue.

It comes with warnings that the peak of the outbreak might not come for another week and a half.

However, ministers have suggested they are keen for schools to reopen after Easter if the situation does stabilise, with claims they have little impact on the spread and could help revive the crippled economy.

The World Health Organization has also warned that it is too soon to lift the strict lockdowns that are in place all over Europe.

WHO director for the European region, Dr Hans Kluge, described the situation on the continent as ‘very concerning’, adding: ‘Now is not the time to relax measures.’

Around half of the 1.4million COVID-19 cases recorded around the world have been in Europe, with Spain, Italy, Germany, France and the UK the five hardest-hit nations.

In a press briefing this morning, Dr Kluge said: ‘To think we are coming close to an end point is a dangerous thing to do.

He added the upcoming Easter weekend was ‘not the time’ to relax restrictions, despite the promise of good weather across much of Europe.

Dr Kluge said: ‘This is not the time to lower our guard. We must soldier on. We are in this together and we will get through this together.’