A rebel group in Eastern Ghouta says it has reached a deal with the Syrian government to evacuate fighters and civilians to the opposition-controlled northwest province of Idlib.

In a statement released on Friday, the Faylaq ar-Rahman group, the second-largest rebel force in Eastern Ghouta, said that the Russian-brokered deal allows for the immediate evacuation of the sick and wounded, and that aid would be allowed inside the besieged area.

Opposition fighters and their relatives would be allowed to leave Eastern Ghouta, on the outskirts of the Syrian capital of Damascus, and those who decide to remain will be guaranteed safety, the statement said.

In addition, a prisoner exchange between Faylaq ar-Rahman and the Syrian government will take place, and the Russian military police will be deployed in the areas that the group controls, such as Irbin, Zamalka, Ein Tarma and Jobar.

In a televised broadcast, Syrian state media Sana said that the evacuation of 7,000 people – fighters and their family members – to Idlib will begin on Saturday at 9am (07:00 GMT).

Syrian forces have split Eastern Ghouta into three pockets, which are under the control of three different rebel groups.

The deal marks the second of its kind in the enclave after the rebel group Ahrar al-Sham agreed to an evacuation from Harasta, the town under its control, on Wednesday.

A third part of the enclave, which includes the city of Douma in the north, is controlled by the Jaish al-Islam opposition group and is the last section under rebel influence.

Al Jazeera’s Zeina Khodr said that the evacuees in both deals were not just fighters and their relatives.

“Other civilians are leaving as well, people who were involved in opposition activities like media activists, medics, civil defence volunteers,” she said, speaking from Lebanon’s capital, Beirut.

“These people are considered terrorists by the Syrian government so they cannot stay.”

Khodr noted that such deals are part of a military tactic that has been used by the Syrian government in the past seven years.

“The Syrian government lays siege to an area, bombs it into submission, starves the people and gives them the choice to leave, starve or die,” she said.

“This has happened in the past and the United Nations has criticised this as forced displacement,” she added.

More than 1,500 civilians have died in the enclave, east of the capital, Damascus, since the government forces backed by Russian fighter jets launched a fierce assault on February 18.

The opposition lost large parts of the area, with the Syrian army claiming it has now recaptured 80 percent of Eastern Ghouta. 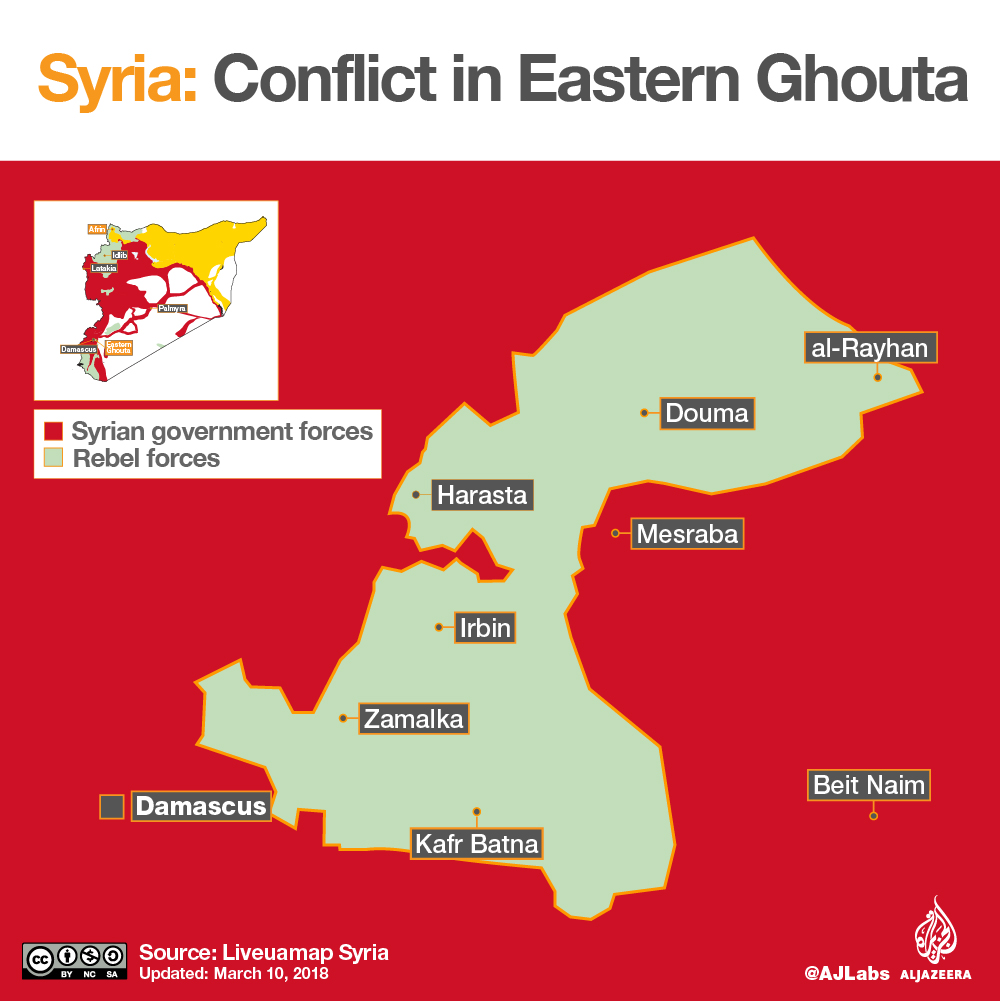