Tax cut for millions of self-employed workers is SCRAPPED by Philip Hammond, costing those affected £130 a year 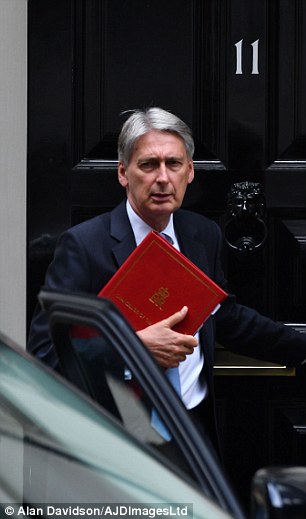 A tax cut for millions of Britain’s self-employed people was today scrapped by Philip Hammond.

The Chancellor has ditched moves to abolish class 2 National Insurance Contributions for the self-employed – costing an estimated 3 million workers around £130 a year.

The announcement was quietly made late this afternoon by the Government in a written statement.

John O’Connell, chief executive of the TaxPayers’ Alliance, said ministers are ‘letting down’ the self-employed.

He said: ‘Millions of self-employed people in Britain who were promised lower and simpler taxes next year will be extremely disappointed by this announcement.

‘High taxes on the self-employed discourages entrepreneurship and risk-taking.

‘If the Government wants to make contributions more equivalent between the employed and self-employed, then they should instead give those on salaries a tax cut.’

The announcement to scrap Class 2 National Insurance Contributions (NICs) was made by George Osborne in his final budget in 2016.

It had been due to kick in from this April, but it had already been delayed by the Chancellor for another year.

He said: ‘We delayed the implementation of this policy in November to consider concerns relating to the impact on self-employed individuals with low profits.

‘We have since engaged with interested parties to explore the issue, and further options for addressing any unintended consequences.

‘A significant number of self-employed individuals on the lowest profits would have seen the voluntary payment they make to maintain access to the State Pension rise substantially.

‘Having listened to those likely to be affected by this change we have concluded that it would not be right to proceed during this parliament, given the negative impacts it could have on some of the lowest earning in our society.’

Mr Jenrick said the Government remained committed to simplifying the tax system for the self-employed and will keep the issue under review. But Labour’s shadow chancellor John McDonnell attacked the move.  He said: ‘This is yet another betrayal of the self-employed.

‘These people are the engine of the economy and have been let down again, while giant corporations have seen their tax bills slashed.

‘Few will ever trust Philip Hammond or the Tories again.’

Although more than three million were set to benefit from the tax cut, there were fears the move would hit 300,000 self-employed workers who earn under £6,000 a year.

They would have been moved to Class 3 National Insurance Contributions – raising their weekly payments from £2.95 to £14.65.