Teacher jailed for a year after forcing himself on a colleague

Primary school teacher, 38, is jailed for a year after forcing himself on a female colleague when she refused to have sex with him in the headmistress’ study 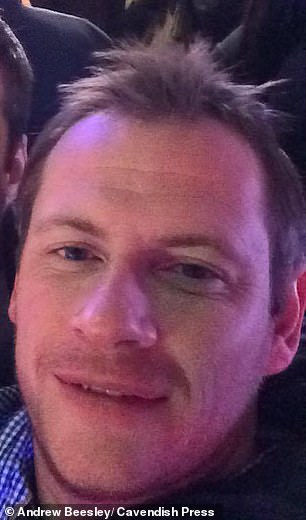 A primary school teacher who tried to force himself on a female colleague when she refused to have sex with him in the headmistress’ study has been jailed for a year.

Andrew Beesley, 38, hoisted the woman on his shoulders in a ‘fireman’s lift’ before cornering her against a wall and trying to kiss her on April 11 last year.

The victim, who is in her twenties, fought back and tried to flee to a nearby classroom at the Manchester school, but Beesley dropped his trousers and grabbed her head while exposing himself to her.

Beesley had already been reported twice to senior staff about his sexual conduct by the woman, and was warned about his behaviour after he ‘jokingly’ spanked the her on the bottom, Manchester Crown Court was told.

Following the April incident, the police were contacted and Beesley was arrested.

Beesley, of Westhoughton, near Bolton, denied wrongdoing but was convicted of sexual assault following a trial and jailed for a year. He was also ordered the sign the Sex Offender Register indefinitely and was banned from contacting the victim.

The incident took place when the victim went into the school during the Easter break to prepare for the new school term, and after seeing this on Facebook, Beesley decided to go in too.

They had a conversation at around 10am and ‘initially there were no problems’, but later as the woman walked down the corridor Beesley walked with her and made inappropriate comments, saying he had the master key for the head teacher’s office and they could go there together.

Prosecutor Vanessa Thompson told the court: ‘He suggested they could have sex in the teacher’s office. The complainant said no and continued to walk towards her classroom but the defendant walked in front of her picked her up and put her over his shoulder.

The incident took place when the victim went into the school during the Easter break to prepare for the new school term, and after seeing this on Facebook, Beesley decided to go in too

‘She felt extremely uncomfortable because of this behaviour and she repeatedly told him to put her down but he ignored her.

‘She wasn’t laughing or going along with this – she in fact kicked out at a trolley nearby in an effort to stop the defendant and banged her leg. He then rubbed her leg and continued to carry her down the corridor.

‘He cornered her against a wall and tried to kiss her on the lips. She moved her face out of the way and pushed him away and went to her classroom.

‘He followed her into her classroom but he was by now standing behind her and he began to approach her from her rear right.

‘She heard something unbuckling and she saw that he had pulled his trousers and his underwear down enough to expose his penis that he was holding in his hand.’

Ms Thompson said that Beesley then put his hand on top of the woman’s head and ‘pushed the left side towards him’, and she tried to pull away but his penis ‘made contact with her right cheek’.

A few minutes later another member of staff came into the room. The victim explained what had happened, and she was told to let the headteacher know.

Following the April incident Beesley was suspended and not permitted to return to the school – but was allowed to remain on the register as a member of staff.

The court was told that the woman realised Beesley had relatives who worked at the school – including his mother-in-law and his partner who was a teaching assistant.

‘She felt very uncomfortable as soon as these matters arose and confused about what to do next knowing that a complaint would upset the apple cart in the school,’ Ms Thompson said.

Beesley, of Westhoughton, near Bolton, denied wrongdoing but was convicted of sexual assault following a trial and jailed for a year

‘She left the school and disclosed to her mother what had happened and after an overnight thought process took the view that the best way forward was to contact the police.’

In a statement, the victim said the incident left her with ‘severe anxiety’, her self-confidence was ‘shattered’ and as a result of making a complaint against Beesley she was left ‘isolated, intimidated and ignored by staff’ and supporters of the teacher.

She said that the incident could have been prevented if the school had dealt with him previously when ‘myself and other female staff members had made complaints’.

‘Every day I thought about what he had done to me, the fact he doesn’t believe he had done anything wrong has made me ill,’ she said.

‘My mum had to give evidence while she was recovering from cancer. No matter what happens to him there will be people who will not accept he was guilty and blame me.’

Sentencing Judge Anthony Cross QC told Beesley he was ‘clearly trying to gain some sexual gratification’ when he decided to ‘try it on’ with the woman, and when she ‘took refuge’ in her own classroom she hoped she would be safe.

‘She was scared and her fears were entirely justified,’ the judge said. ‘You left and a complaint was made – it was made within minutes of the incident occurring.

‘She must have been terrified about making the complaint, worried that nobody would believe her that they would rush to judgement which in fact many in that school did.

‘But she plucked up the courage and made a complaint to her mother and to the police.

‘I should make it perfectly plain that I’m satisfied she was subjected to appalling treatment by member of staff at the school at which she was employed. She was isolated and intimidated by staff who supported you.

‘Those matters are for the education authorities and those who govern the matters of the school. She reported you twice and nothing was done. I’m absolutely satisfied that your victim has suffered severe psychological harm. You chose to carry on when it should have been obvious to you that your victim wanted nothing to do with you at all.’