St Petersburg: Austerity measures are gripping the Russian space agency Roscosmos, with management facing up to a 20 per cent salary hit and staff layoffs predicted.

What's more, the Russian business daily Kommersant reported this month that top officials were fired at the Vostochny Cosmodrome, a vast spaceport being built in Russia's Far East. Accusations of corruption have surrounded the spaceport's construction since the release of a report last year by opposition leader Alexei Navalny's now-defunct Anti-Corruption Foundation. 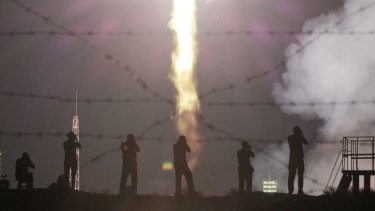 People watch a Soyuz-FG rocket booster carrying a new crew to the International Space Station blast off at the Russian leased Baikonur cosmodrome in Kazakhstan.Credit:AP

Rogozin – a longtime songwriter who mixes a bit of Venus and Vegas – has lent his name to an album's worth of patriotic space-themed songs released last month on the agency's official website. Three of the songs he wrote himself, though all are performed by other singers.

The album's version of Rogozin's I Fly Above Russia – with an accordion solo – was performed by folk icon Nikolay Rastorguyev in 2018 on Cosmonautics Day, a holiday marked by the type of patriotic-themed concerts that have grown increasingly popular in recent years.

"We must work in order to defend/the gift of our forefathers," go Rogozin's lyrics. "And at night, intoxicated or dry/We dream of Russia." 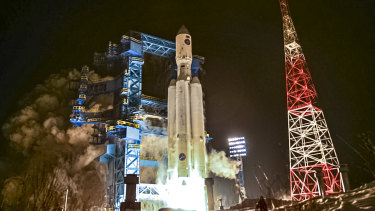 A test launch of a heavy-class carrier rocket Angara-A5 in the Arkhangelsk Region of northwestern Russia. Credit:AP

The 2019 celebrations included lip-synced performances of two other Rogozin creations on the Roscosmos playlist: the power ballad We Tear the Sky to Shreds and a tune with all the soar of a Eurovision song contest entry, Above the Earth Flies a Ship.

"Above the Earth flies a ship," begins one chorus. "In the cosmos of space/Like an ancient airship/Friend of wind and wandering/Snug in a star blanket."

The album dips back into the Cold War for Space Maps Tucked Into Tablets and And Apple Trees Will Bloom on Mars. There's also a rendition of the 1980s' The Grass at Home, a song about cosmonauts longing for familiar lands, which became the official Roscosmos anthem in 2009.

But Rogozin's songs also serve a political purpose. In terms of national mythmaking, Soviet achievements in the space race are outmatched only by the victory over the Nazis – celebrating the nation's accomplishments beyond Earth's boundaries is a fail-safe way to invoke popular support even during troubling times. 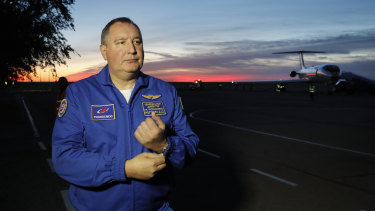 President Vladimir Putin's Kremlin has drawn on space race symbolism more than once this year to project an image of strength amid the pandemic. Naming Russia's coronavirus vaccine Sputnik V, in honour of the iconic Soviet satellite program, was meant to surround the country's coronavirus response with an aura of innovation and triumph.

Rogozin is not the first high-ranking Russian official to venture into political performances. Vladislav Surkov, a presidential aide who was one of the ideological architects of the Putin era before being ousted, released a poem in September on the "natural high" of breathing ("Who needs cocaine?").

The head of the Kremlin's Investigative Committee of Russia, Aleksandr Bastrykin, was found to have published more than 50 political poems under a pseudonym, many of which are satirical verses attacking political opponents, including "Another Day in Jail for Navalny," a reference to the Kremlin critic who recovered from a nerve agent poisoning in August.

Even Putin has been known to play the piano while waiting to receive foreign dignitaries.

Rogozin is poised to benefit from the recent wave of space-related patriotism, even getting the Roscosmos trademark "Let's go!" – the famous words Yuri Gagarin spoke in 1961 before becoming the first human to orbit the Earth – for upcoming collections of perfume, alcohol and clothing.

When the US space shuttle program was retired in 2011, delegating all future International Space Station launches to the Roscosmos-operated Baikonur Cosmodrome in Kazakhstan, it was a symbolic victory that reasserted Russian dominance over the cosmos. In May, Elon Musk’s Crew Dragon Demo-2 successfully transported American astronauts to the station. It was seen by Roscosmos as a challenge in one of the last areas where the Kremlin could boast technological authority.

Some Russian internet pranksters quickly made a deepfake music video of Musk singing The Grass at Home, one of the 12 songs released on the Roscosmos site.

Bashing US space efforts has become something of a Russian art form.

In early 2020, the Russian Academy of Sciences drafted a complaint to the United Nations over the brightness of the Starlink satellite clusters of Musk's company SpaceX, saying they have become a concern to astronomers. In October, Rogozin blasted NASA's upcoming lunar program for being too "US-centric."