This nightmare is not sparked by some gory horror movie, but a shocking real-life attack. 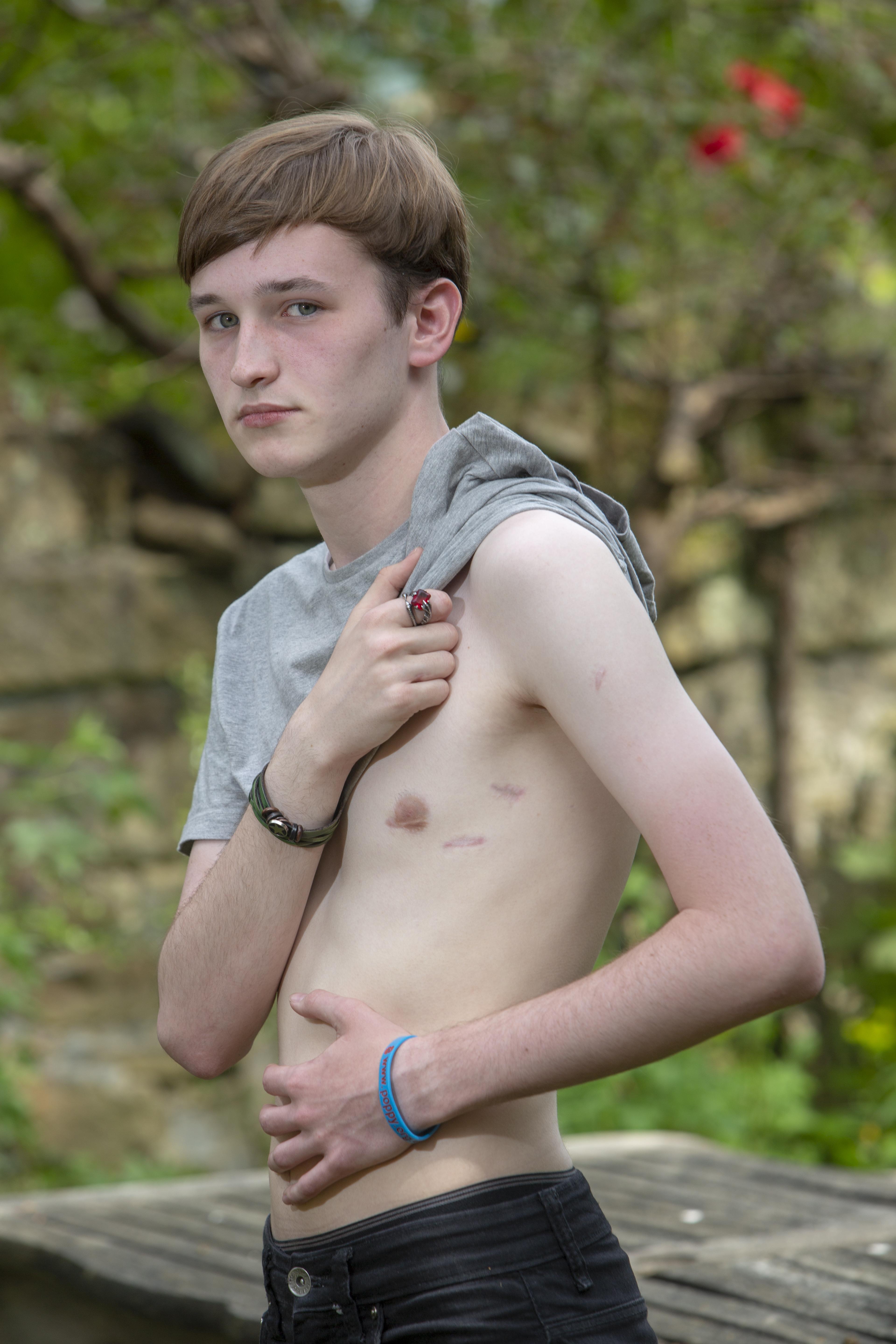 The 18-year-old is lucky to be alive after a sex game with ex-girlfriend Zoe Adams took a sadistic turn.

Days after Kieran had moved into her flat, Adams walked into the bedroom, her face painted like a clown. She put a pillow over his head, whispered “trust me” then stabbed him five times with a 10in knife she had hidden at the side of the bed.

This month 19-year-old Adams — who is obsessed with serial killers and male sacrifice — was jailed for 11 and a half years at Carlisle Crown Court after admitting wounding with intent to cause grievous bodily harm.

The judge called her “cruel and sadistic” after the court heard how she had thousands of gruesome images on her iPhone. 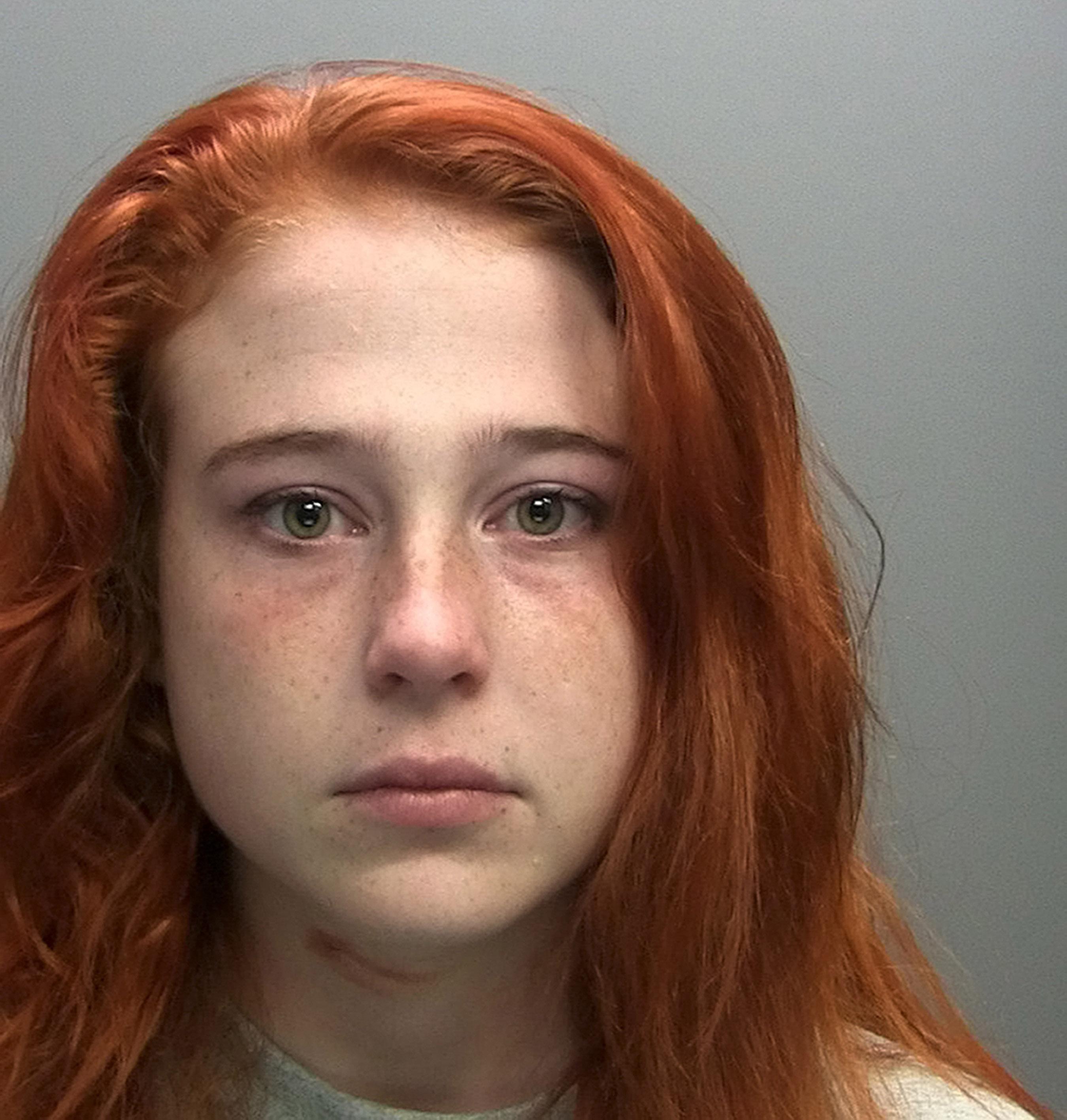 One was of a woman drenched in blood with the caption: “Murder is like a bag of chips, you can’t stop after one.” Another read: “I don’t think about males unless said male is strapped up and being used as a human sacrifice — you should be grateful you are not part of it.”

Adams may now be behind bars, but the ordeal still haunts Kieran — especially in his dreams. In an exclusive interview with The Sun, he says: “I will never explore kinky sex again.

“There is absolutely no way in the future I’d ever consent to being tied up or anything like that. From now on it is just normal sex.

“I’m pleased with the sentence, it reflects the severity of what happened. I am not only physically scarred, I am emotionally scarred too. I’ve not slept properly since that day and I’m plagued with bad dreams.” 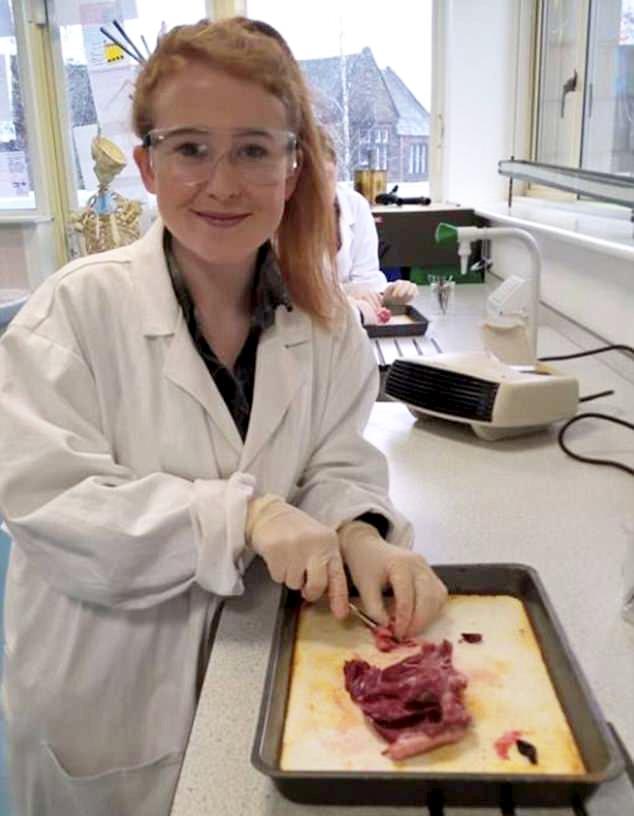 Kieran, of Hexham, Northumberland, was 17 when he met teen mum Zoe through mutual friends in May 2017. They hit it off and over the next two months would talk every day and spend the weekends together.

He says: “She seemed nice, kind and funny, I liked her.

“But she was a bit odd and had a dark sense of humour. She’d joke about hurting her exes.

“I just thought she was messing around but now I know she meant every word.” 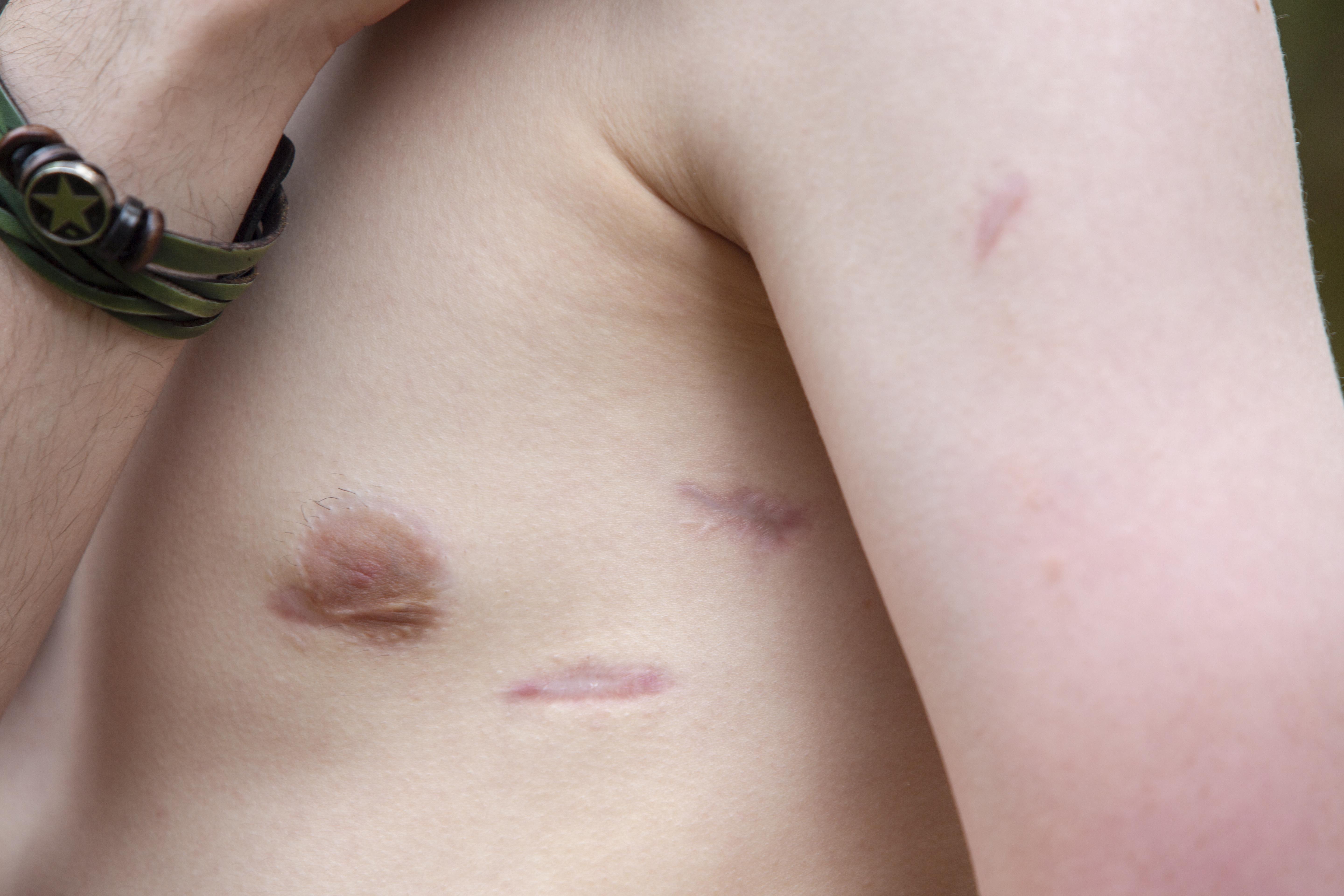 He says: “I used to tell her no. It wasn’t really my cup of tea and I didn’t feel comfortable doing it.”

As he got to know her better, he could see how Adams revelled in violence and gore, but never suspected what a danger she posed.

He says: “One time she told me about a dream she’d had about a friend’s ex-boyfriend and his new girlfriend. 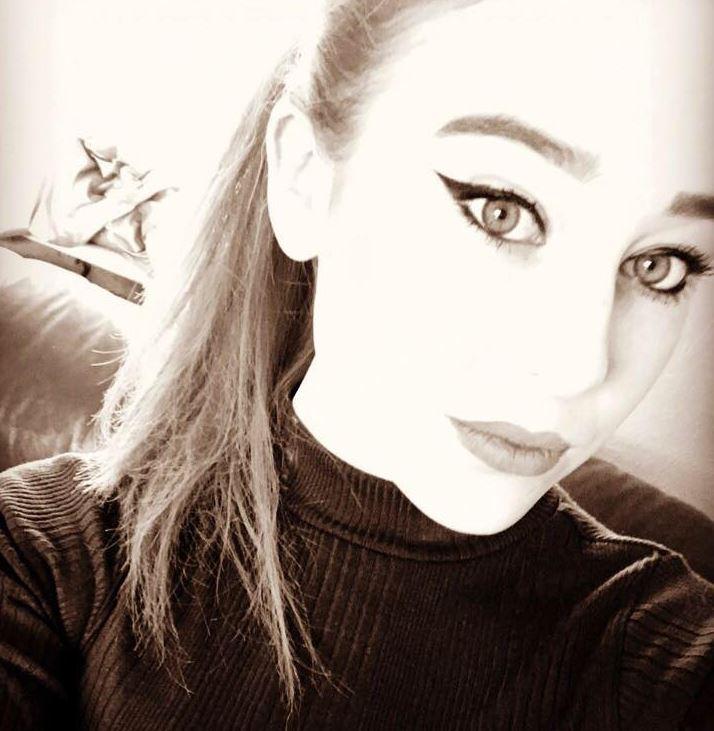 “In the dream his throat was slit and she was naked on top of him. His new girlfriend was nude and hanging from the rafters above them. It seemed to excite her, she got a kick out of men being in pain.

“Another time she showed me a video on her phone of a man in the woods getting his head smashed in by three guys with a baseball bat. I could barely look but she was laughing and said it was cool.

“She had a pet snake and loved feeding it live mice. It used to make me recoil watching the animal devour its dinner but she enjoyed killings.”

Last June she sent Kieran the message saying she did not think about men unless they were “being used as a human sacrifice”. 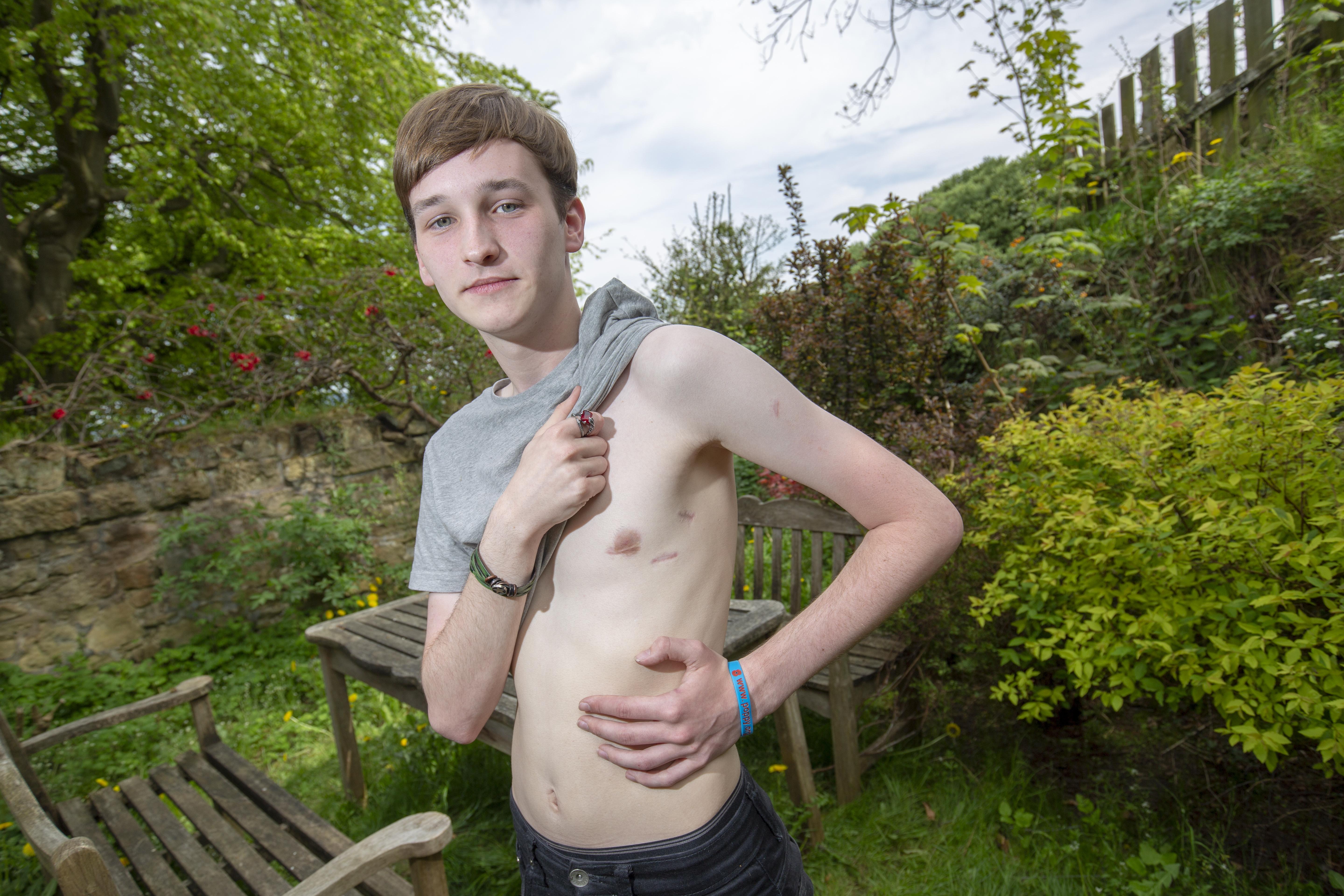 He says: “I just thought it was Zoe being Zoe.

“She often said weird things and, although she was into kinky stuff, I didn’t think she actually meant it.”

Just three days before the attack on July 29, 2017, Kieran moved into Adams’ flat in Wigton, Cumbria.

On the fateful day the pair spent their time shopping before going home to drink vodka and hang out. Adams smoked weed too.

He recalls how she asked him: “What will you let me do with you tonight? Will you let me tie you up?” Kieran says: “I told her no. 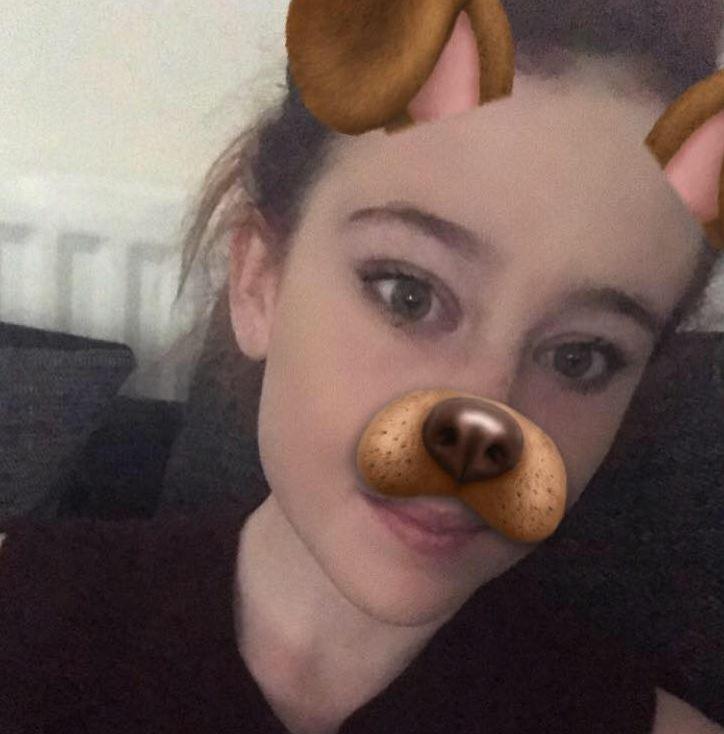 “I had felt ill all day and the booze wasn’t helping so I went upstairs to bed after being sick.”

He woke to find Adams standing in the doorway, barefoot, her face painted in creepy clown make-up. She asked him: “Does this scare you?”

He says: “Zoe had painted large diamond shapes around her eyes and a red, Joker smile.

“I told her she was freaking me out and to wash it off but she just stared at me, smiling excitedly. She stayed like this for a few minutes before she slowly backed out of the doorway.” 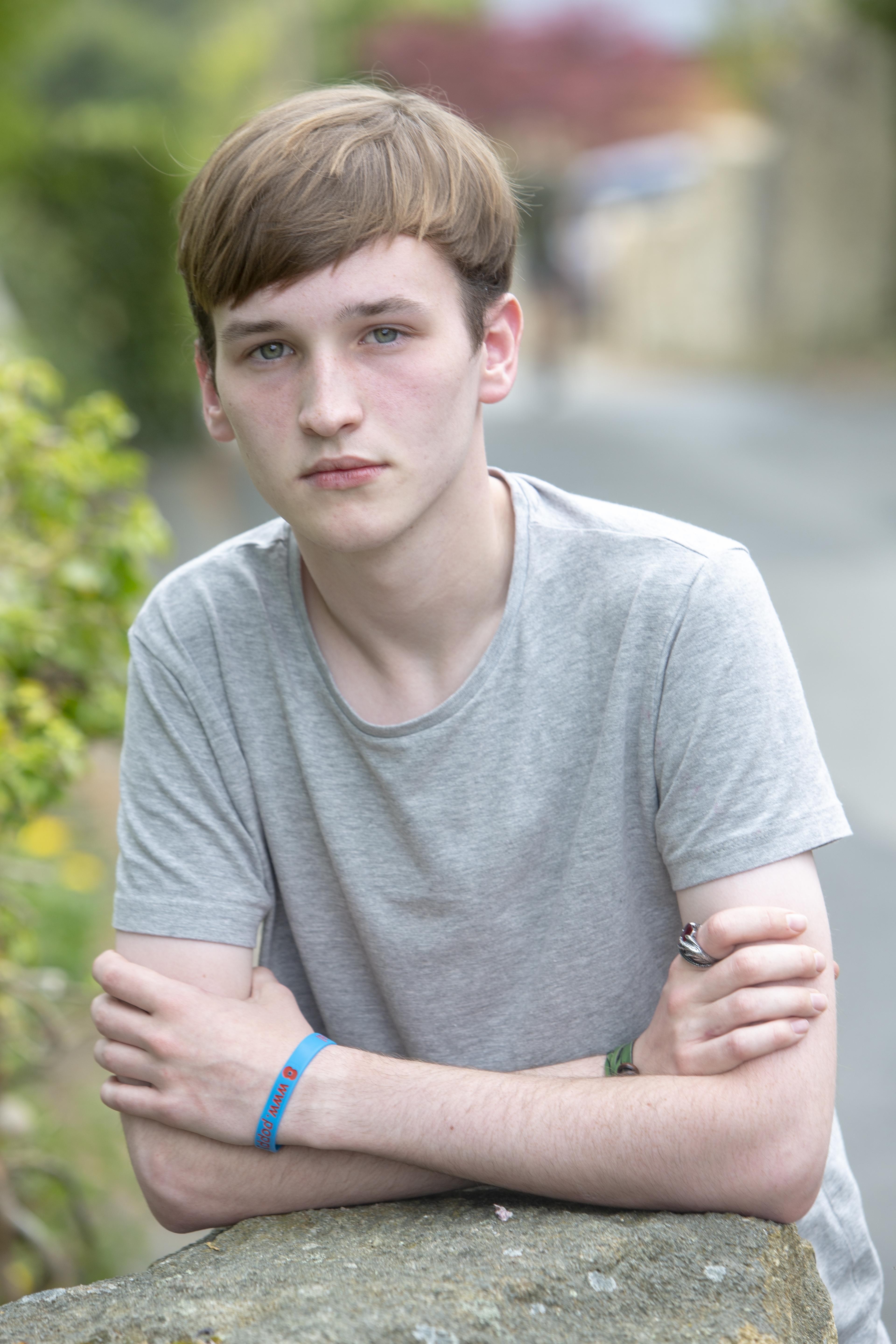 The day before, Kieran had told Adams how seeing a barefoot clown was his worst nightmare.

She had replied: “A barefoot clown, the ultimate Kieran killer.”

He dismissed her clown make-up as a sick joke. He could not have been more wrong.

Adams later returned armed with duct tape and a condom. She took off her top and, wearing nothing but boxers, climbed into bed and cuddled him. Again, she begged Kieran to let her tie him up with the tape and became “moody” when he refused. So he agreed to have his face covered with a pillow to spice up the sex. 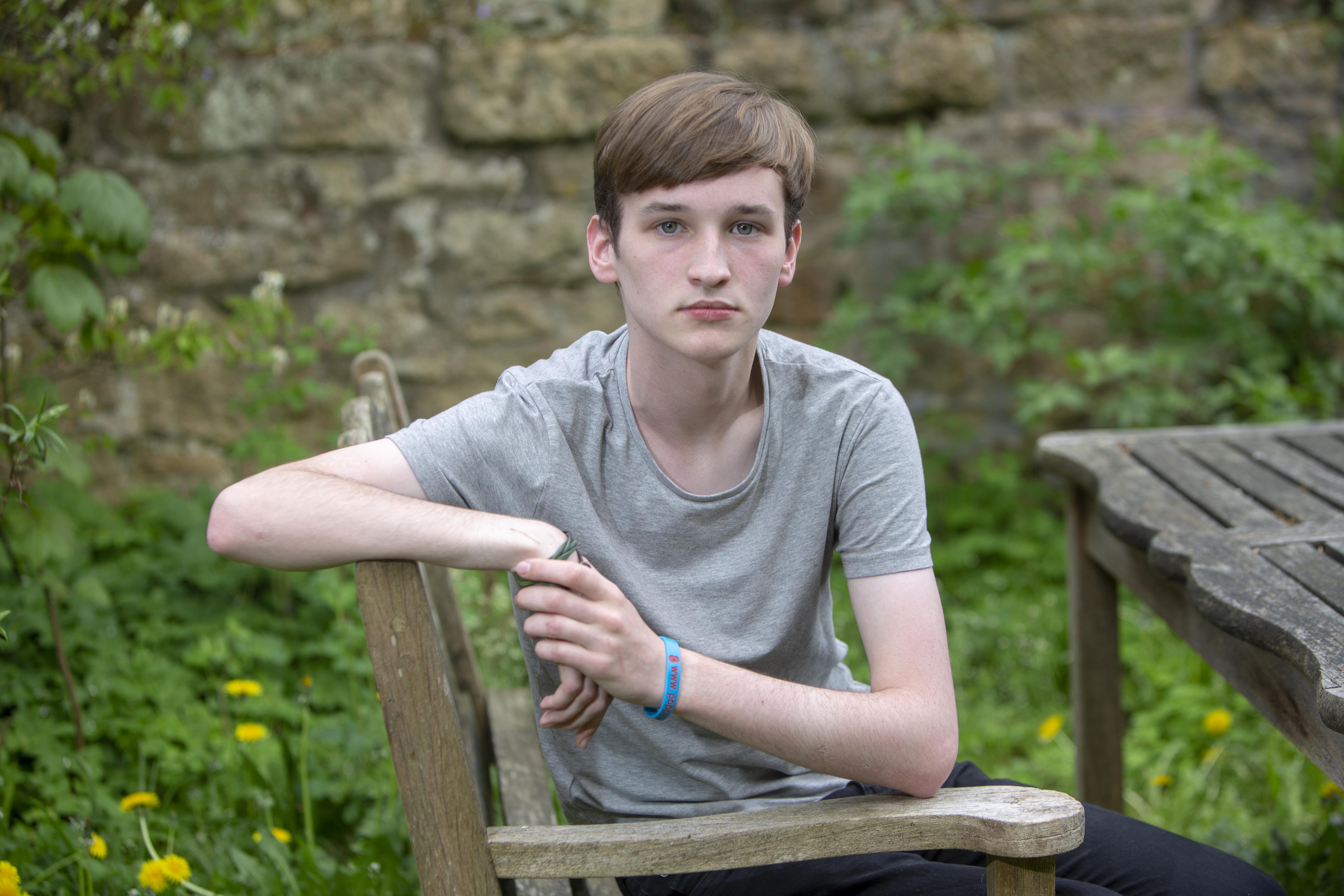 He says: “She was stroking my chest and asking questions like, ‘Do you really love me? Do you really want me?’ My phone went off so she took it and put it down the side of the bed. I thought she was trying to read my messages, as she still had her hand down there. Now I know she was holding the knife.

“I took the pillow off to see what was happening and she said ‘trust me’ and put it back over my face.

“Seconds later, she stabbed me.”

Blood poured out of Kieran’s wounds as Adams plunged the 10in blade into his chest, arm and leg. His fingers still bear the scars of defensive wounds from when he battled to save his life. 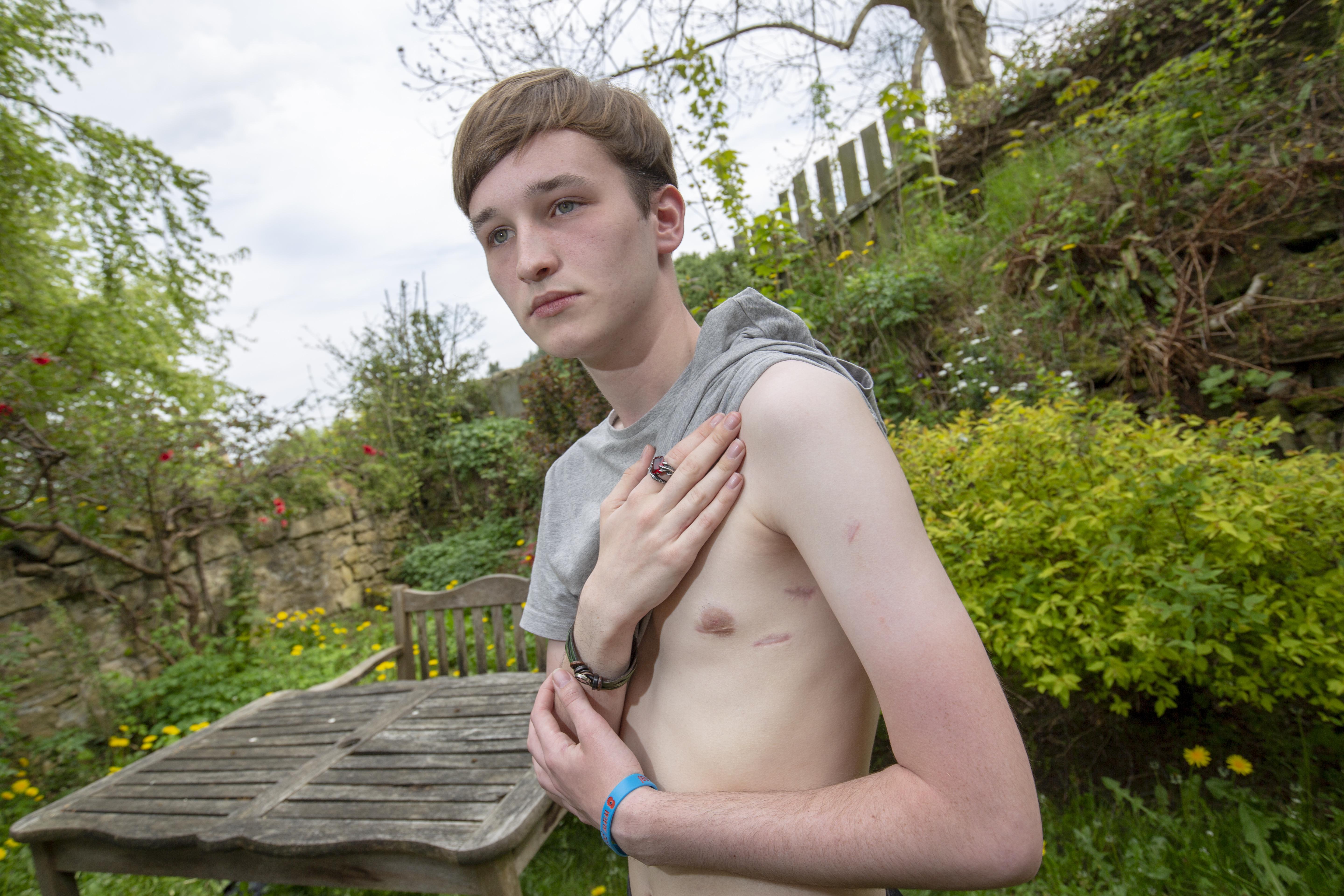 He recalls: “I didn’t feel any pain, I just heard my lung pop and felt blood gush out of me. My adrenalin was pumping. I was in shock.”

Despite his terrible injuries, Kieran managed to get away from his attacker. At the front door he turned and saw Adams standing in the kitchen — naked — staring at him. In one hand she held the knife dripping with his blood.

Kieran ran to her aunt’s house nearby and said: “Zoe’s stabbed me.” He was taken to the Royal Victoria Infirmary in Newcastle, where he had emergency surgery. He spent the next ten days in hospital, fighting for his life. He had a collapsed lung and got pneumonia. He also had deep wounds to his arm, leg and fingers. 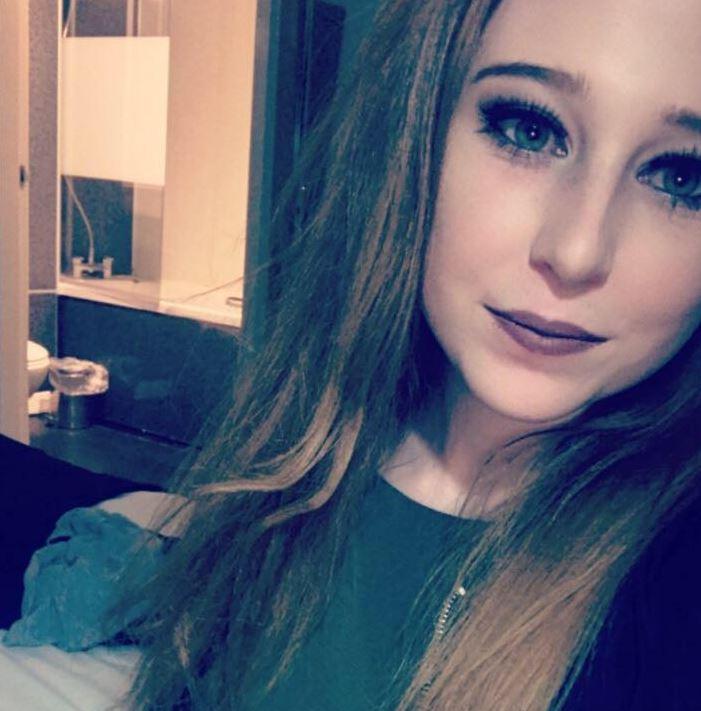 He says: “When I woke up I asked the nurse if I was going to be OK. It was a huge shock, I had wires and tubes coming out of me.”

Adams claimed she had blacked out after all the alcohol and cannabis and had no recollection of the attack.

But the court did not believe her version of events. The judge told her: “You had decided to cause serious harm to Mr Bewick during sex.”

Kieran is now trying to rebuild his life. He is studying law, psychology and history and is dating a 17-year-old from his college course. 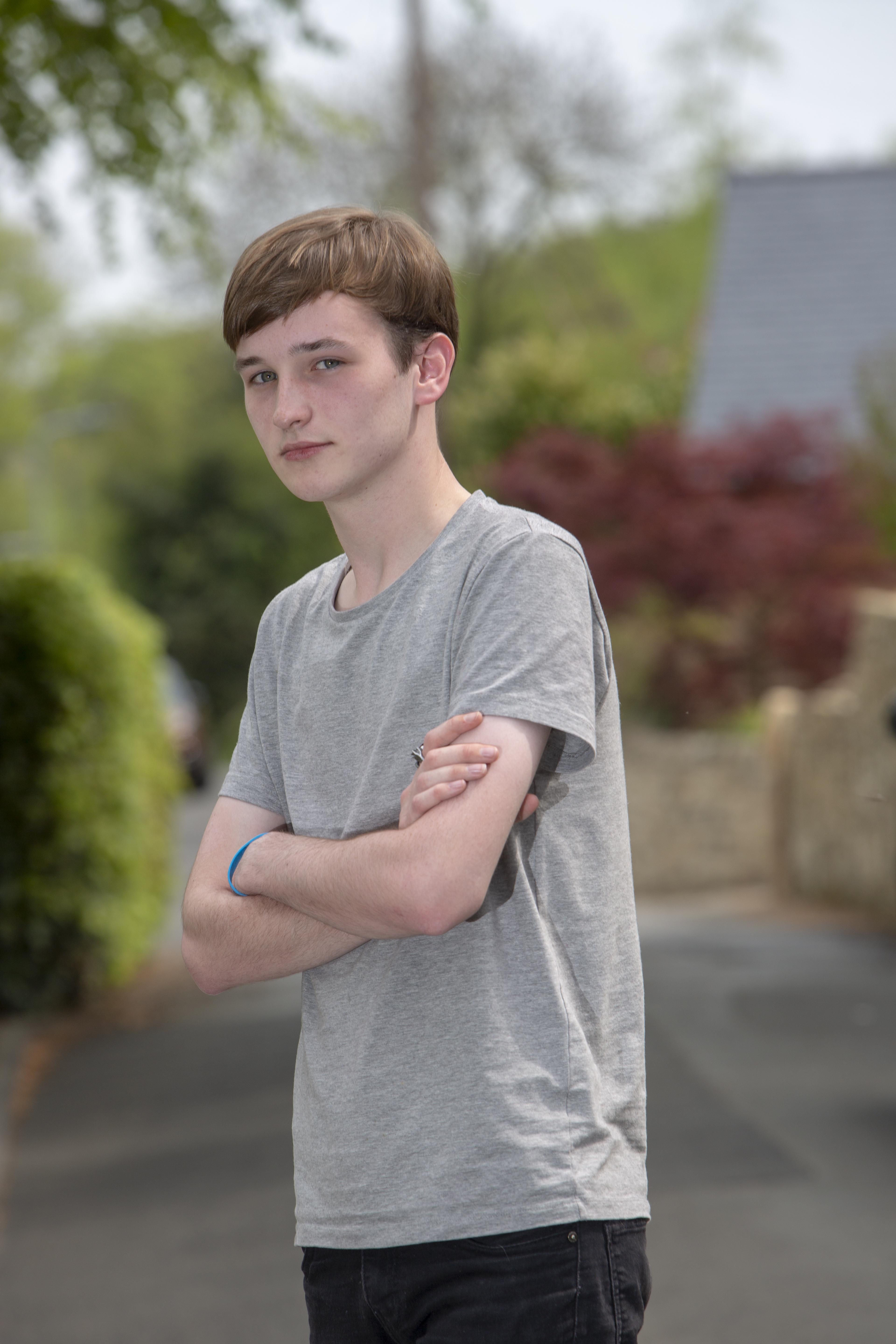 Not wanting to name his new girlfriend, he says: “She’s kind and sweet — nothing like Zoe. She comforts me when I have nightmares and wake up dreaming she’s stabbing me.

“Even though I know she’d never hurt me, I still dream it.

“I cared about Zoe and couldn’t understand how she could do this to me. I believe she intended to kill me that day, but I’ll never know why.

“This has had a huge impact on my life but I refuse to let her win. She nearly took my life, but she won’t take my future.”