Terrifying footage has emerged showing a little boy exploring a concrete ledge high above the street in Phnom Penh, Cambodia.

The youngster had stepped over a make-shift barrier before walking along the 11.8 inch-wide concrete strip.

The video shows two toddlers, one behind a discarded door acting as a makeshift barrier, and one outside of the top floor room of a grey-cladded property with a corrugated roof.

The toddler doesn’t seem worried or frightened by his closeness to the edge of the ledge as he happily plays.

There did not appear to be any adults in sight as the boy walked along the terrace, some 36 feet above the ground.

Footage from last Tuesday morning shows the boy, without clothes, shuffling back and forth.

He is seen picking up a black bag and placing it on a chair, while the toddler inside reaches his hand outside to inspect the bag.

The boy then studies the ground for a moment before briefly glancing down toward the street below.

He crouches down, precariously near to the edge. 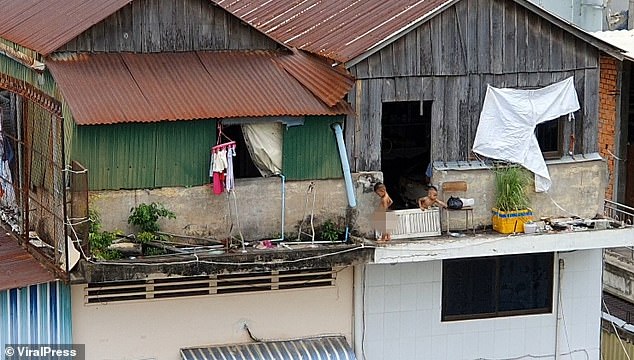 The video shows two toddlers, one behind a discarded door, and one outside a fourth floor grey-cladded property with a corrugated roof

The little boy walks carefully past the white door which blocks the other smaller child from coming out but makes the ledge even more narrow.

He takes the black bin bag off the chair and drops it to the ground before throwing down other smaller objects.

He then crawls under a wooden chair and out again as the child inside looks on. 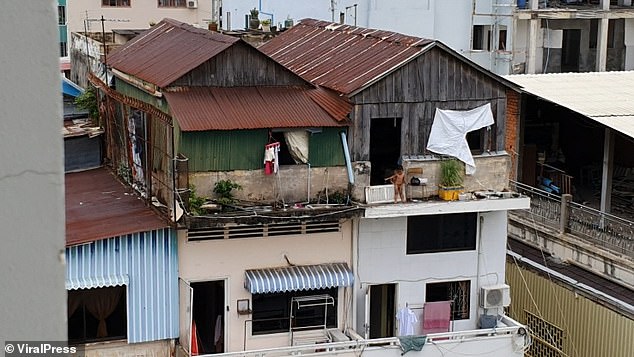 He then sits next to a plant growing out of a yellow pot and seems to be absorbed with something on the narrow ledge.

Onlooker Pheara Sang, 29, captured the shocking incident and said he did not want to shout at the boy in case it startled him.

He said he told neighbours who alerted the parents.

The incident lasted for more than ten minutes before an adult took them inside. 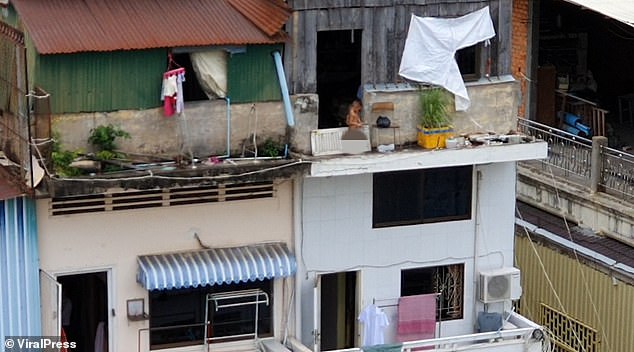 ‘I was working at the hotel nearby when I looked out and saw the two boys. I was very shocked,’ Pheara said.

‘I wanted to tell their parents but I didn’t know them.’

‘I told people living around there to do something. I went back to the hotel and kept watching them. Luckily, nothing bad happened but an accident can happen at any time,’ he said.