The relaxation in COVID-19 testing and isolation requirements agreed by the national cabinet on Thursday is necessary given the confusion and dysfunction of the past few weeks.

But it will only deepen doubts about whether state and federal governments have a well-considered strategy to deal with the surge in cases that is only likely to increase in coming weeks. 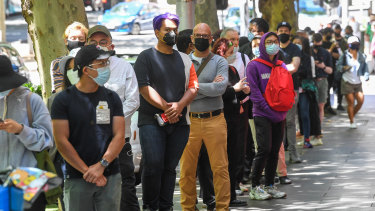 Melburnians queue for testing on on Monday.Credit:Justin McManus.

The key decision state and federal leaders made at Thursday’s meeting was narrowing the definition of who counts as a close contact of a COVID case.

As a result, many people who have come into contact for less than four hours with known cases and were previously required to isolate in their homes until they had received the result of a PCR test can now do as they please or go to work. This is a significant change from the message Australians have heard for more than a year: get tested.

The decision is designed to reduce the demand for PCR testing. People have been spending hours in endless queues and waiting so long for results that they are useless by the time they arrive.

Now, people who are low-risk will be steered towards taking cheaper rapid antigen tests or told to monitor their symptoms.

The changed definition of close contact will also free hundreds of thousands of essential workers who were furloughed off work even though it was far from certain they had the disease.

These measures carry a greater risk of spreading the disease because inevitably some infected people will now be considered casual contacts and will be free to wander about in the community.

But with daily case numbers across the eastern states now rising sharply, the status quo is unsustainable.

The overloaded system of testing and isolation is causing huge damage. For example, many genuinely sick people such as cancer sufferers cannot take tests they need to access hospital services. Without emergency payments, the ban on working for casual contacts is destroying family budgets.

The national cabinet’s decision should thus help make more efficient use of limited resources, but it is a pity that it has come only after weeks of chaos.

It should not have come as a surprise that the systems designed to control an epidemic with a few thousand cases in a day will not work when there are tens of thousands of cases.

Instead, the federal government has been too slow (again) in rolling out the vaccine booster program needed to protect the most vulnerable.

State governments have been too slow in procuring the RA tests. They are now a fundamental pillar of the public health response to this new phase of the pandemic, and they should be available free, as they are in many countries. The decision of national cabinet was only to provide them free for close contacts and for the symptomatic. Others will have to pay for them at pharmacies or supermarkets, making them less available to poorer Australians, an inequitable result.

Governments have also failed to communicate clearly to the public about testing. Many people are still confused about when they should take a PCR test, when an RA test is adequate or indeed when they should not take a test at all and simply monitor for symptoms.

The country now faces a few difficult months catching up and there will be some continuing restrictions on normal life. But there is still no reason to panic. Omicron has proven to be less severe than earlier variants – particularly for those who have three doses of vaccine – and it should be possible with careful management to keep deaths low and prevent the public hospital system being overwhelmed.

Governments must however stop trying to manage this pandemic as a public relations exercise and start preparing serious plans which allow plenty of leeway in case new hazards lie ahead.