Jakarta: Thailand has blamed Australia for the detention of Hakeem al-Araibi, arguing it only detained the Melbourne-based refugee footballer after an Interpol Red Notice alert was issued by Canberra. 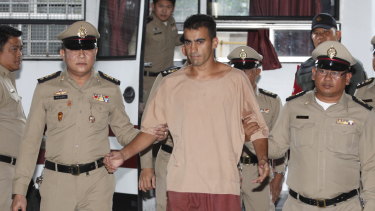 Hakeem Al-Araibi arrives at the Bangkok court on Monday with his legs shackled.Credit:EPA

And it has insisted that people should "refrain from pre-judging the Court’s rulings and prematurely jumping to the conclusion that Thailand will extradite Mr Hakeem back to Bahrain".

"Thailand had previously not been aware of Mr Hakeem’s case and does not have any prejudice against him. Indeed, we would not have become involved in the issue had we not received the Red Notice alert from the Australian Interpol and the subsequent formal request by Bahrain for his arrest and extradition," Thailand's Ministry of Foreign Affairs said in a statement on Wednesday.

"The case is now under the purview of the Court of Justice. In proceeding with the legal process, the Executive Branch cannot interfere with the judicial process."

The statement from Thailand is a clear attempt by the government to avoid responsibility for its central role in what is becoming an international embarrassment for the military junta.

Australian Prime Minister Scott Morrison has now written twice to Thai Prime Minister Prayut Chan-o-cha asking for Araibi to be released, FIFA has called for his release and a large contingent of representatives from foreign embassies attended Araibi's most recent appearance in court on Monday.

In an exclusive interview with the Sydney Morning Herald and The Age on Tuesday, begged Morrison to keep fighting for him and expressed his love for Australia, desire to return home to Melbourne and his disgust at being having to wear leg shackles to court.

The Thai Ministry of Foreign Affairs claim that the executive branch of government cannot step in to free Araibi appears to directly contradict a previous statement from Thailand's Office of the Attorney-General that the executive could intervene.

Australia's ambassador-designate to Thailand, Allan McKinnon, said after Monday's court hearing that "we understand from the public announcement from the Office of the Attorney-General on Friday that there is executive authority with the Thai Government to cease this case at any time. This was confirmed by the prosecutor in comments today. So the Thai Government can act and with respect we’re asking the Thai Government to act now to free Hakeem al-Araibi". 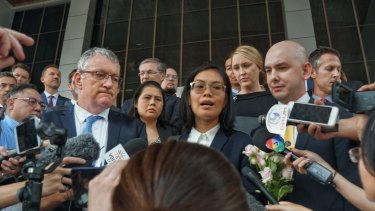 From left, Allan McKinnon, Australian ambassador designate for Thailand, Araibi’s lawyer Nadthasiri Bergman and other foreign diplomats address the media after the extradition hearing for Hakeem Al-Araibi on MOnday.Credit:Amilia Rosa

The 25-year-old Araibi was detained on November 27 when he travelled to Bangkok for his honeymoon because of the Red Notice, a form of international arrest warrant.

The Red Notice was quickly withdrawn because recognised refugees are not supposed to be subject to Red Notices requested by the country from which they have fled.

But by the time the notice had been withdrawn, Bahrain had already asked Thailand to extradite Araibi and he has remained in custody in the Bangkok Remand Centre ever since.

In December, Australia’s Department of Home Affairs said it had not put the Red Notice in place but that membership of Interpol created certain obligations on member agencies.

The department confirmed the Interpol National Central Bureau in Australia had "advised Thai authorities in relation to the scheduled arrival of a person [Araibi] who was the subject of an Interpol Red Notice".

Araibi is next due to appear in court on April 22 to fight the push to extradite him. He faces months more in detention.

Back in 2012, the footballer was convicted by a Bahrain court for vandalising a police station, a crime he says he did not commit. He was playing in a nationally-televised soccer match until 30 minutes before the incident.

Araibi says he was tortured by Bahraini authorities and fled Bahrain in 2014 for Australia, and was formally granted asylum in 2017.

He fears being tortured again if he is sent back to Bahrain.