Thailand loves a drama; the usually chaotic streets have been known to go quiet when a particularly juicy lakorn TV serial reaches its zenith. As the Melbourne Cup stops this nation, the climax of a six-part historical epic about a negligent mother’s descent into gambling and adultery will captivate the country, and woe betide any lowly prime minister who interrupts what feels like the third hour of her dying from syphilis for such trivial matters as national security announcements.

Since June 23, the 13 young players and coach from the Wild Boar Academy have provided a spectacle like no other, aided by a supporting cast of heroes, villains, shamans and shysters numbering in the thousands. The wait for them to emerge safely from the Tham Luang cave was a harrowing, tragic and ultimately triumphant tale. As one veteran of coups and conflict in Bangkok put it, there was a grim suspense to wondering whether boys as young as 11, some of whom had never swum, could complete a dive that had already killed a seasoned operator. 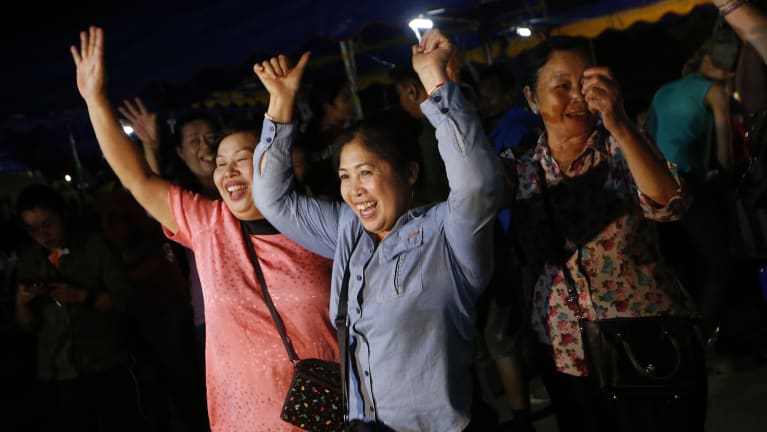 Thais celebrate the rescue of the Wild Boars soccer team and their coach.

Superstition is never far away in Thailand and soothsayers made unhelpful proclamations even before the boys were found. Much too was made of the coach’s time spent as a novice monk, which is hardly unusual in that part of the world, although questions remain about whether he tried to get the boys out of the cave or led them into misadventure in the first place. Like all good dramas, there was a villain: step up Deputy National Police Chief Srivara Ransibrahmanakul, for worrying about paperwork at a time like this when he’d never shown such inclinations before.

The heroes were myriad: prime among them the best cave divers from around the world, including the two Englishmen who at last came across the 13 Wild Boars after 10 days of searching, the “frogs” of the Thai SEAL team and Australian doctor Richard Harris, whom rescue chief Narongsak Osottanakorn called “not good, the best”. Narongsak himself won praise, stepping into a role a provincial governor could easily shirk; because there is no national emergency management agency in Thailand, responsibility and blame can fall to no one.

The volunteer spirit was epitomised by former SEAL Saman Gunan, who left his day job to lend his expertise and ultimately lost his life. On Wednesday, his widow told of how they used to express their love for each other every day.

Thais, as the world has seen in recent days, acquit themselves well in a crisis. During the floods of 2011, then the protests and the coup of 2014, it was often said the country is good at dealing with whatever comes its way. Thank Buddhism or blame the tumult of history for the ability to live in the moment.

Planning, however, is another matter: every other year there are droughts and every other year there are floods and every year someone shakes their head and wonders why water isn’t managed better. After the once-in-a-century flooding of 2011, it would be reasonable to expect stronger disaster management procedures. But no, who needs that when you’ve got a guy with a yellow scout scarf?

Ideally, situations such as the Wild Boar rescue would rely less on individual and community heroics and more on professionalism and procedures. But there's less drama that way, so don't hold your breath.

Michael Ruffles is a Herald journalist. He worked in Bangkok from 2012 to 2017.