The flag-draped avenues outside a soot-blackened Buckingham Palace were thronged as Britain celebrated the end of six years of war in Europe.

So many crammed against the railings that the King and Queen were forced on to the balcony eight times to keep them happy. 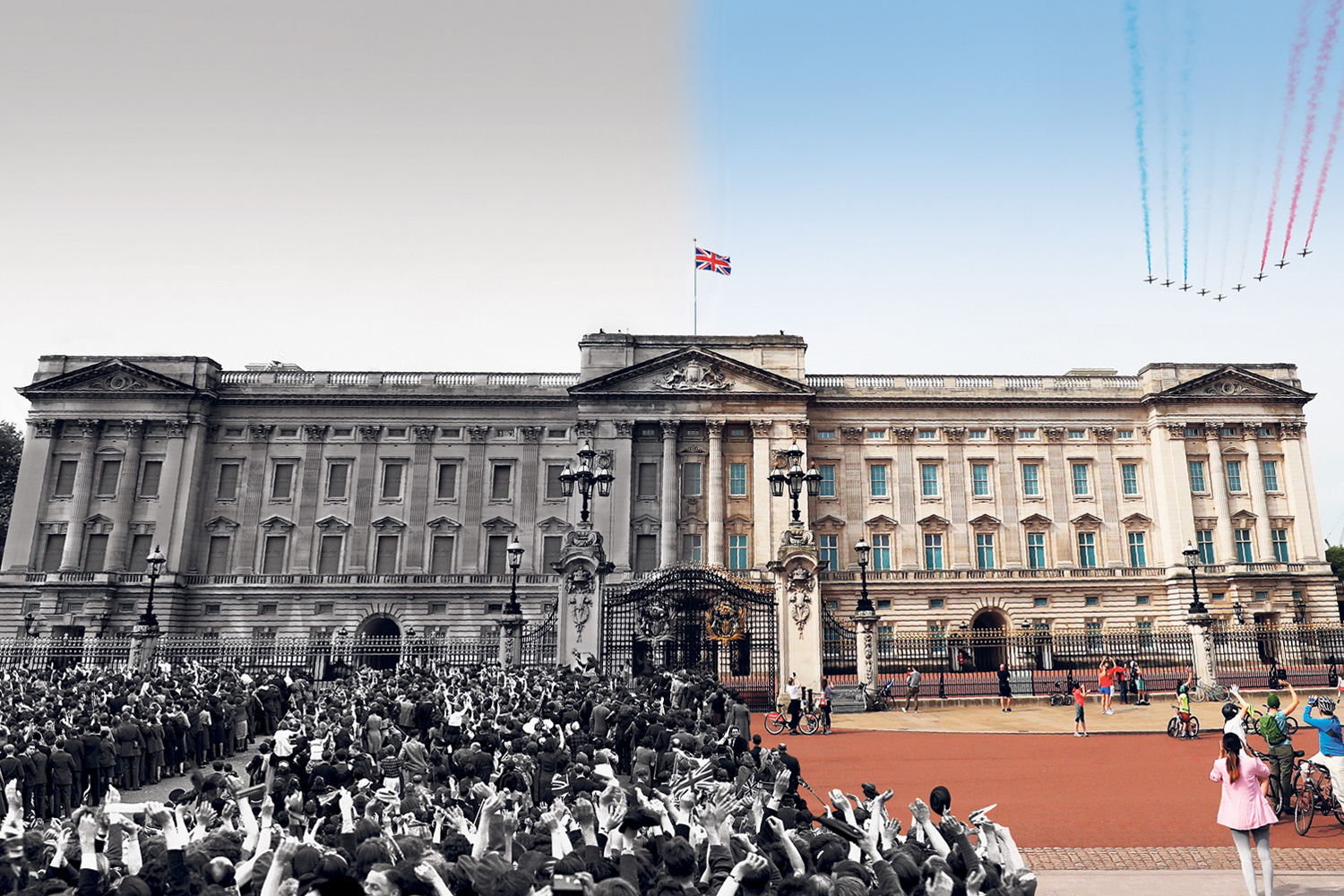 But yesterday, after six weeks of the Covid crisis, a tiny clutch of cyclists were the only people who watched as the Red Arrows left a red, white and blue trail over the palace to mark the 75th anniversary of VE Day.

Beside the parade ground at Horse Guards, two paramedics, the frontline troops in today’s battle, parked their vehicle to witness the RAF flypast.

Kerry Johnson, 28, who has been working 12-hour shifts, said: “I found the experience emotional, thinking about those who sacrificed their lives for our freedom.

“I also thought about our colleagues we have lost in the NHS and the London Ambulance Service at this time.

“I’m proud to wear my uniform working for such a great service, serving the public in their time of need.”

Horse Guards should have been the gathering point for 700 men and women of the war generation invited for a phenomenal weekend of celebrations. These modest VIPs were to have been carried along the Mall on massive floats to be greeted by the Queen and the Royal Family. 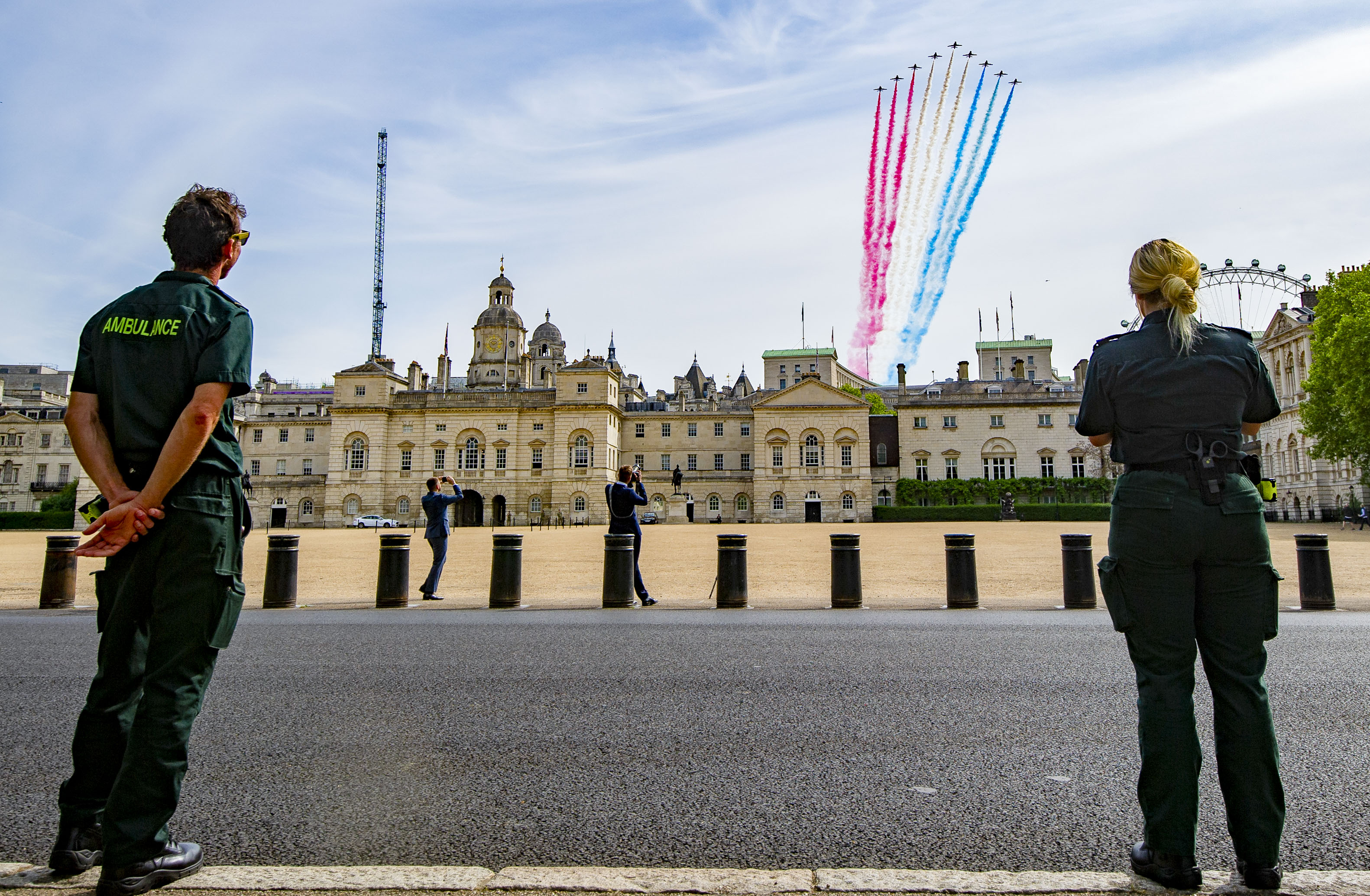 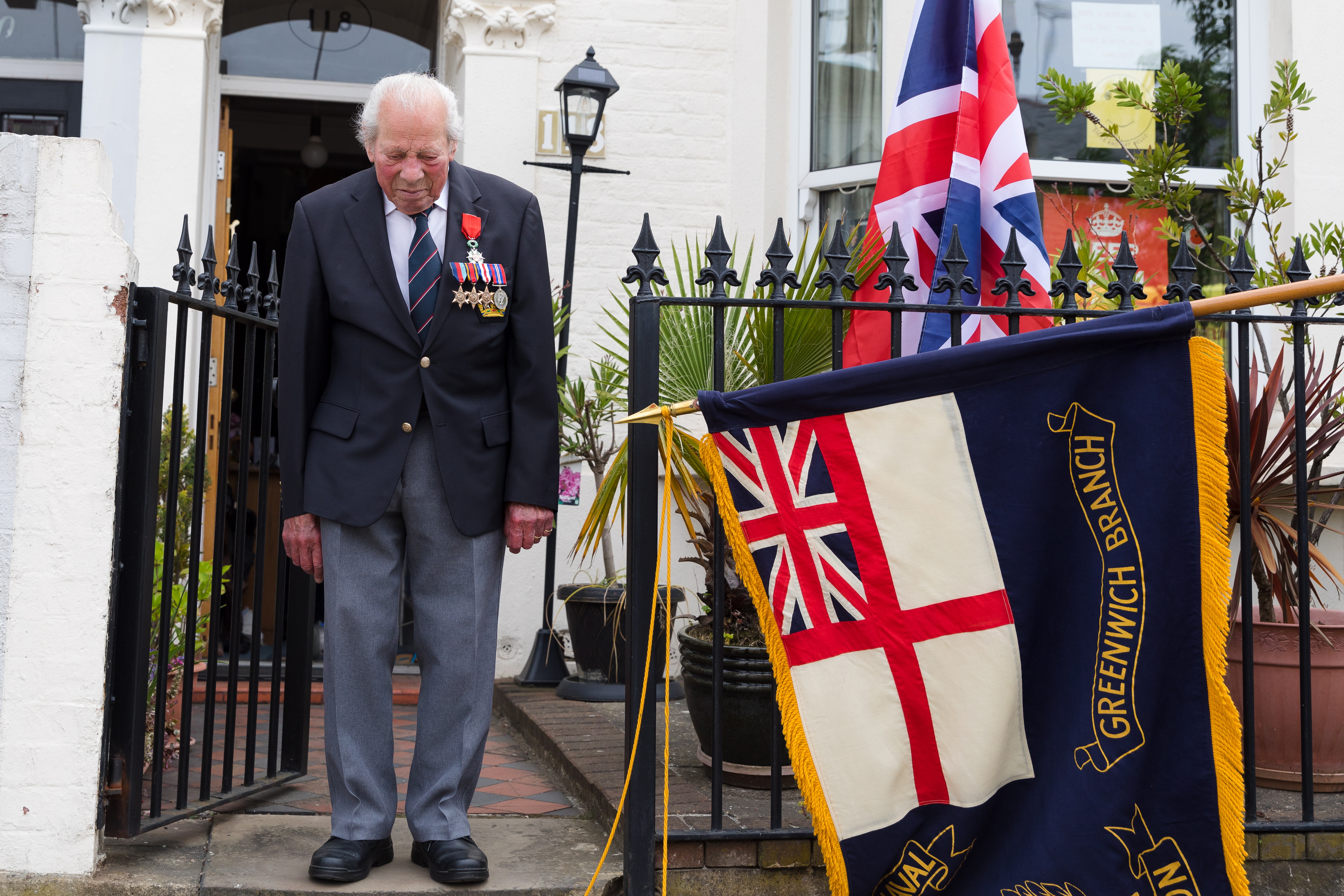 The Mall, for decades the centre of so many commemorations of that day in 1945, was yesterday eerily deserted.

No flags flew on the Palace because the Queen, who had been on the balcony all those years ago with her parents, sister and Prime Minister Winston Churchill, was in lockdown at Windsor Castle.

Prince Charles and Camilla led the nation in remembering the 450,000 Brits who died in World War Two from their ­isolation at Balmoral in the Scottish Highlands.

Boris Johnson, still washed out from his brush with death, marked the two-minute silence in the Cabinet room before going to the doorstep of No10. 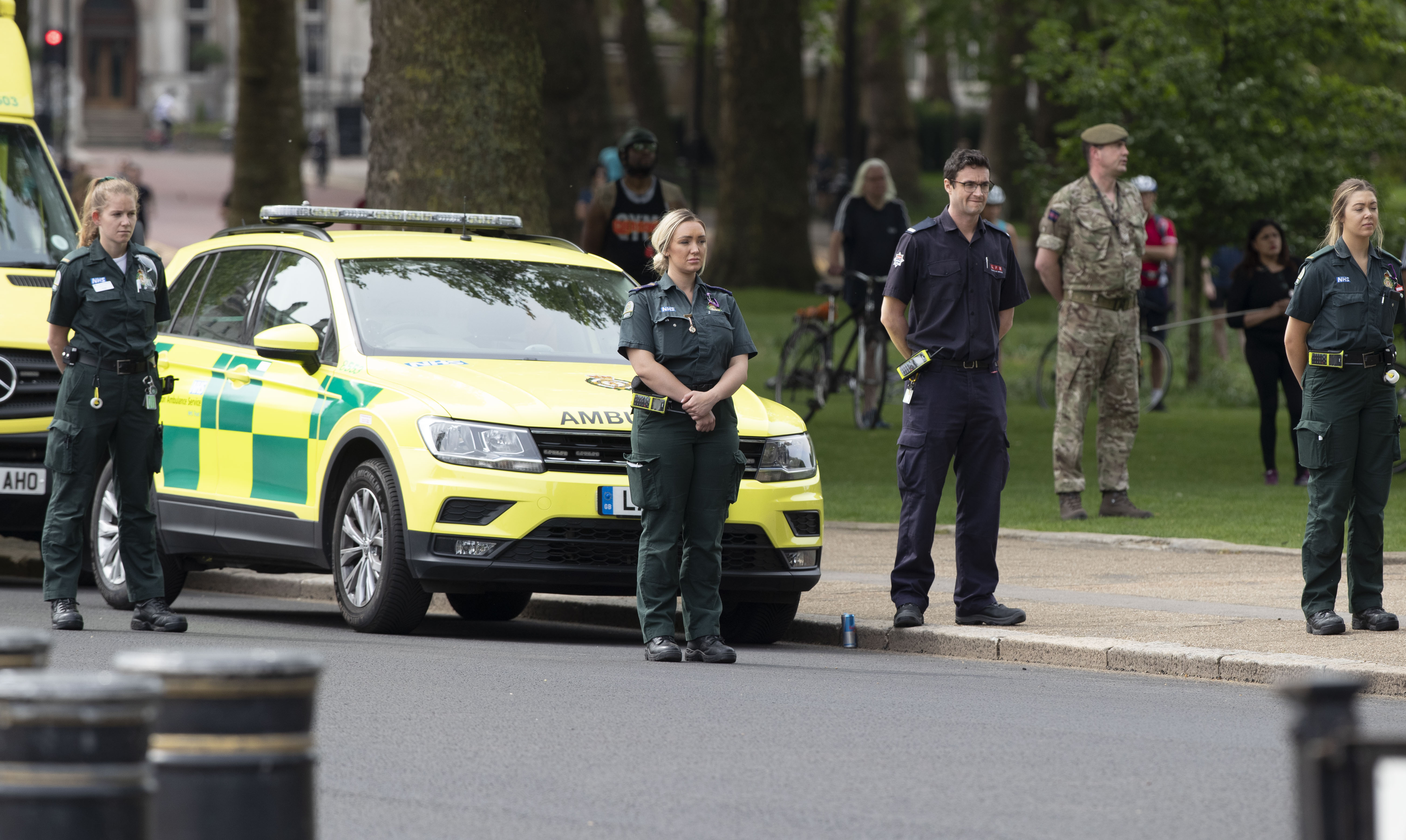 At least his residence, like millions of homes around the country, was decked in Union Jack bunting and the windows filled with rainbow paintings — the symbol of the war against 2020’s unseen enemy.

Boris and his ministers spent time speaking to some who should have been in London.

Just beyond the security gates at the end of Downing Street, a small group applauded a solitary veteran as he made his way slowly to the Cenotaph.

On the memorial there was just one poppy wreath, laid by Maj-General Chris Ghika on behalf of the Armed Forces. 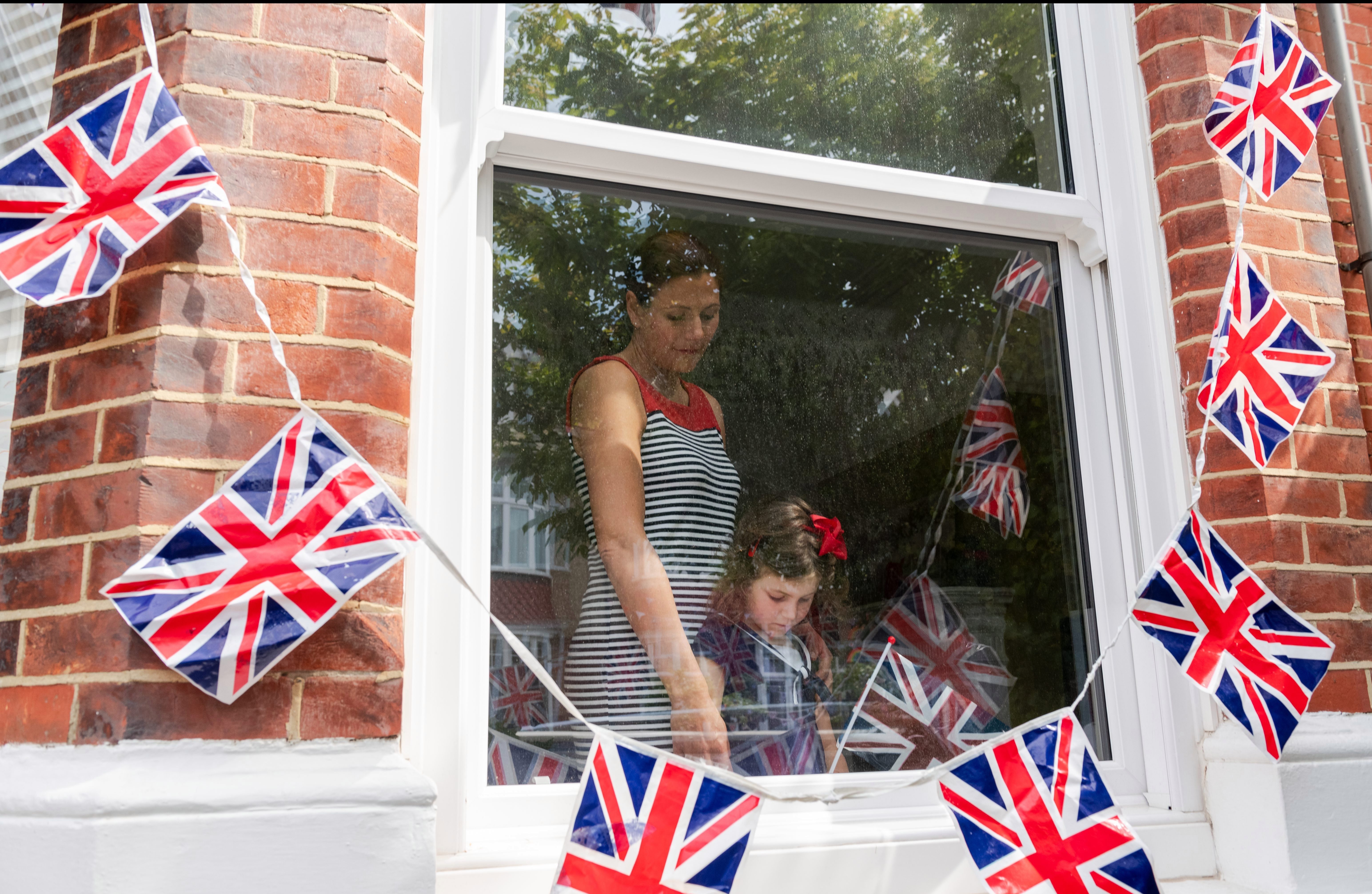 The sparse crowd was a stark contrast to the scene in 1945 when Whitehall was crammed with a grateful crowd lustily cheering Churchill as he spoke from the balcony of the Ministry of Health, its windows still boarded up from the Blitz.

The Royal British Legion and Ministry of Defence were forced to scrap 18 months of planning a thank-you like no other to a generation who gave their all for their children and grandkids.

Instead, the two organisations booked an illuminated billboard in Piccadilly Circus.

The poster, as high and wide as four double-decker buses, said simply: “Thank you to our Second World War veterans.” 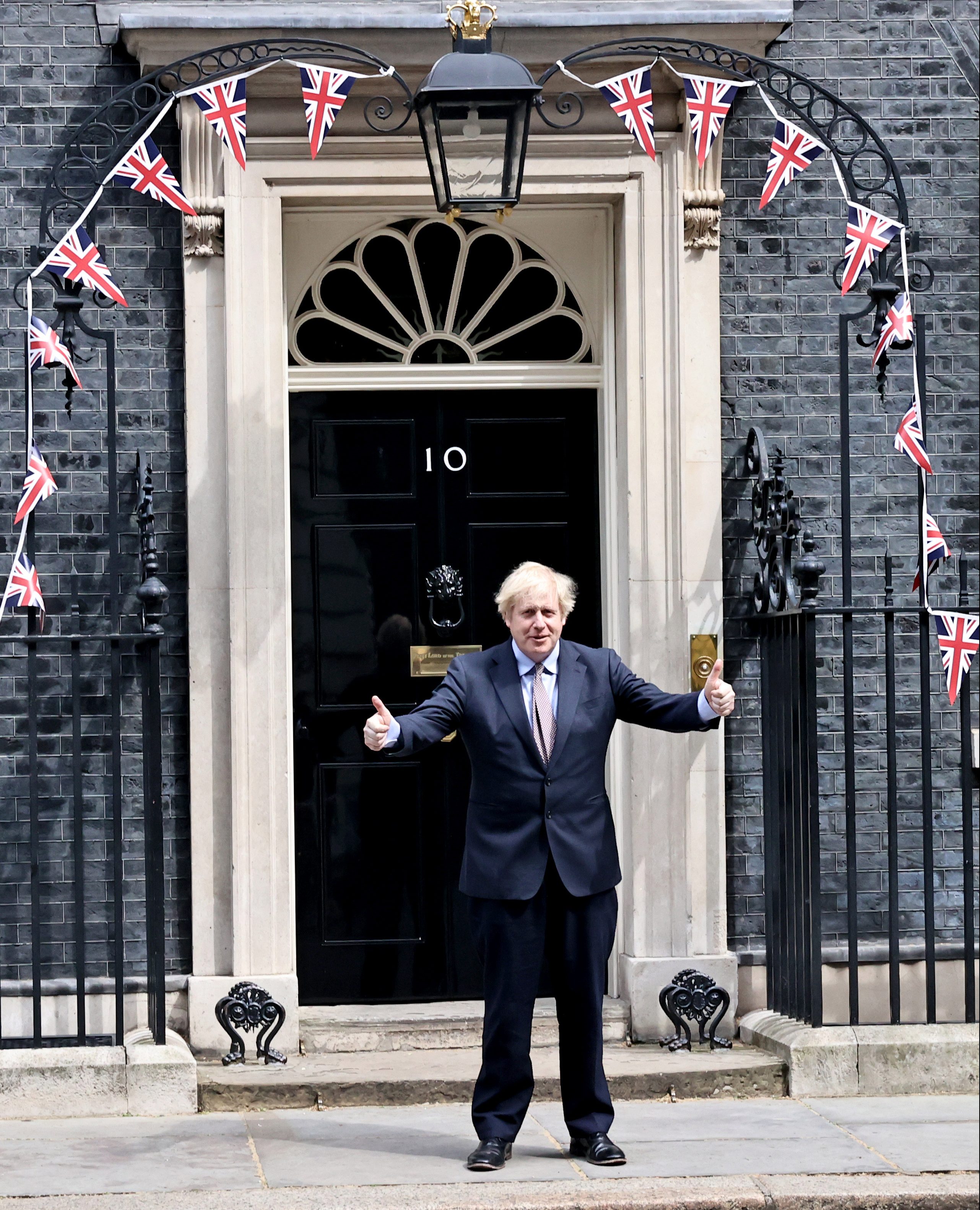 The eight words spoke for us all. Trafalgar Square, where some of the most famous VE Day images were taken, was much more sober yesterday.

Just a few folk milled around the fountain where 75 years ago young women and men in uniform frolicked in the water.

The real celebrating yesterday went on away from city centres where millions of people held Stay At Home Street Parties.

In 1945, women, children, men too old to fight and those in reserved occupations — the equivalent of today’s key workers — crammed around trestle tables for street parties, like Fleming Street in Gateshead. 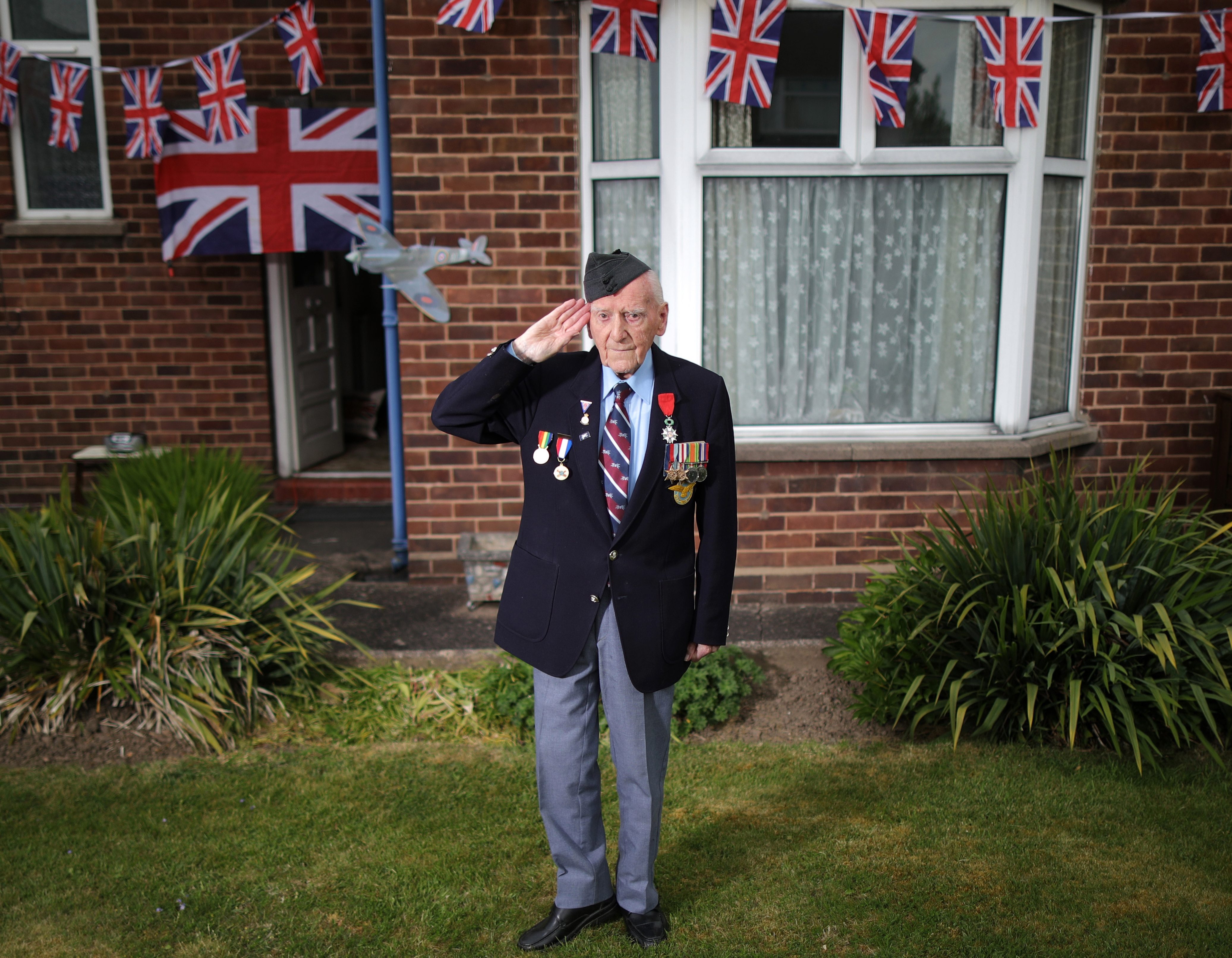 Seventy-five years later people were at separate tables with social distancing a priority. Fleming Street has long since been bulldozed but in nearby Birtley residents of Elm Crescent held a party, with each family in their own section of the pavement as they played bingo and sang songs.

Art teacher Emily Miller, 40, who helped organise the get- together said: “It was massively important to mark VE Day, especially given what is happening in the world at the moment. It was really emotional.”

In Cambrian Road, Chester, the street dressed up in 1940s clothes to sing and dance.

Resident Matt Baker said: “We wanted to send a message to show community spirit is really possible in these hard times.”

Bernard Morgan, 96, observed the silence outside his Crewe home. As an RAF sergeant, at 20 he was a code and cipher operator who received the telex declaring the end of hostilities. 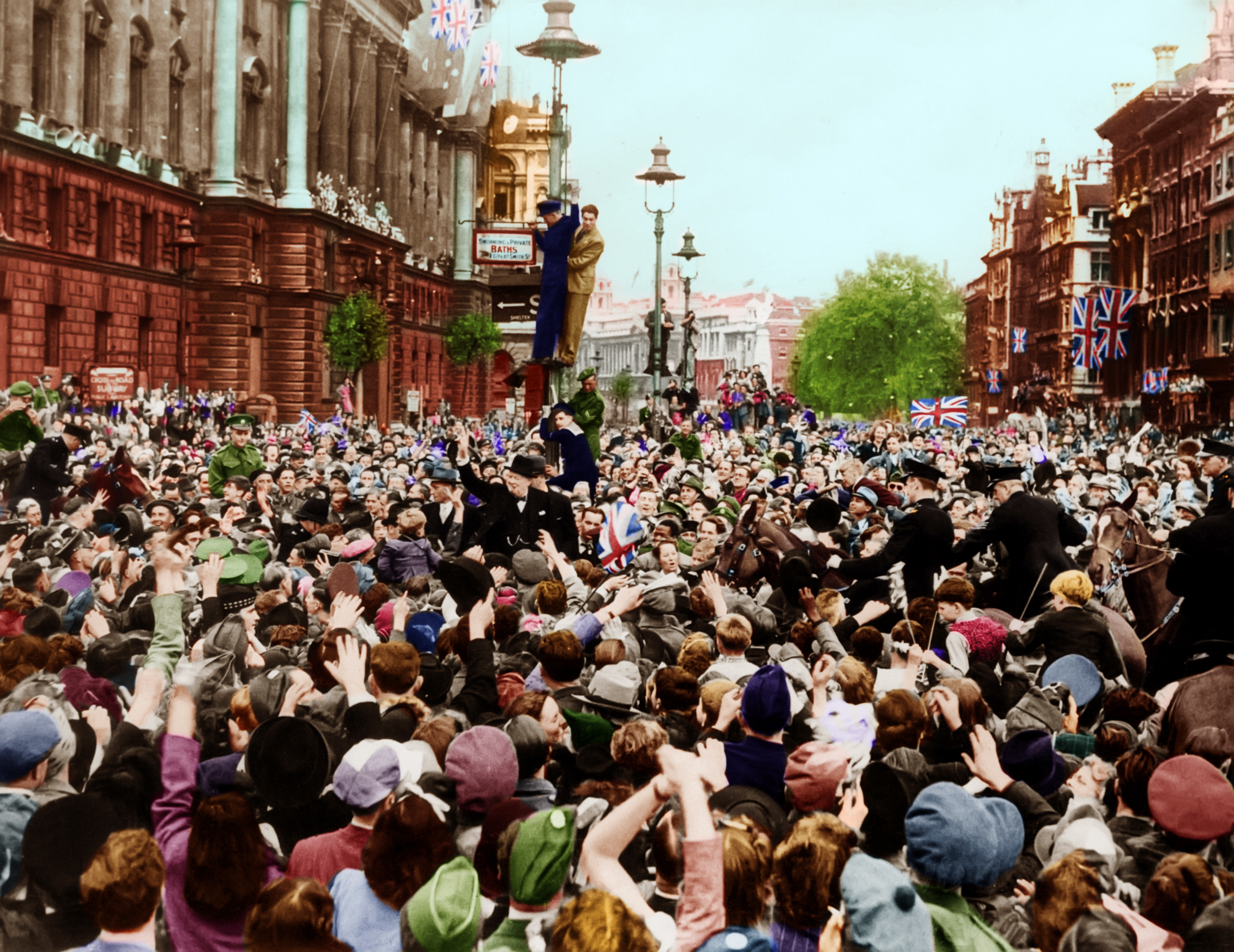 Bernard, who still has the original, said: “It’s so important that we make the most of these opportunities, not just to celebrate the achievement, but also to ensure that such horrors never happen again.”

When Churchill addressed the crowds on May 8, 1945, he told how Britain had stood alone for a whole year. “Did anyone want to give in?” he asked.

And by yesterday’s reaction, the British people of 2020 are made of the same stuff. They are not downhearted and will not give in to this invisible foe. 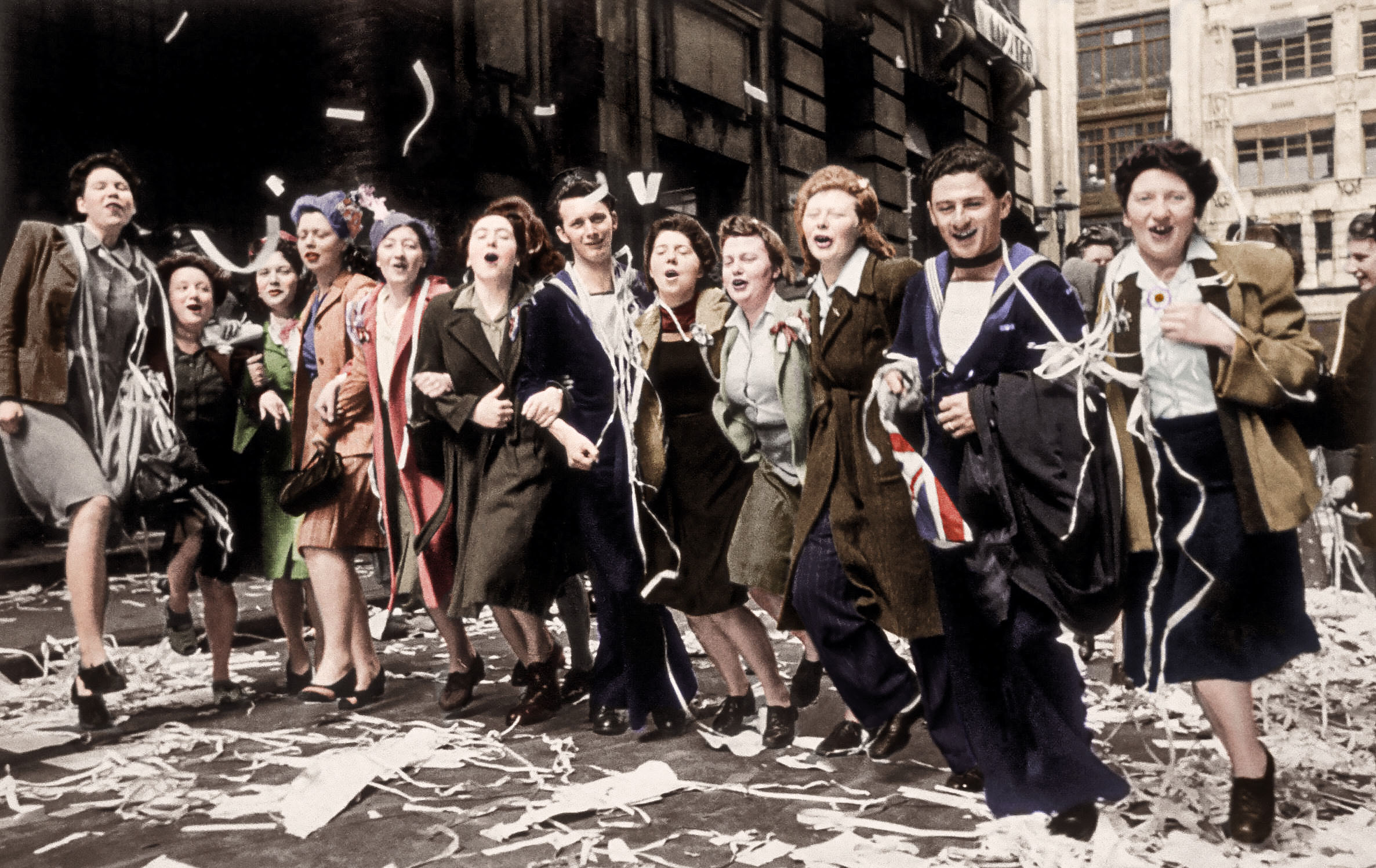 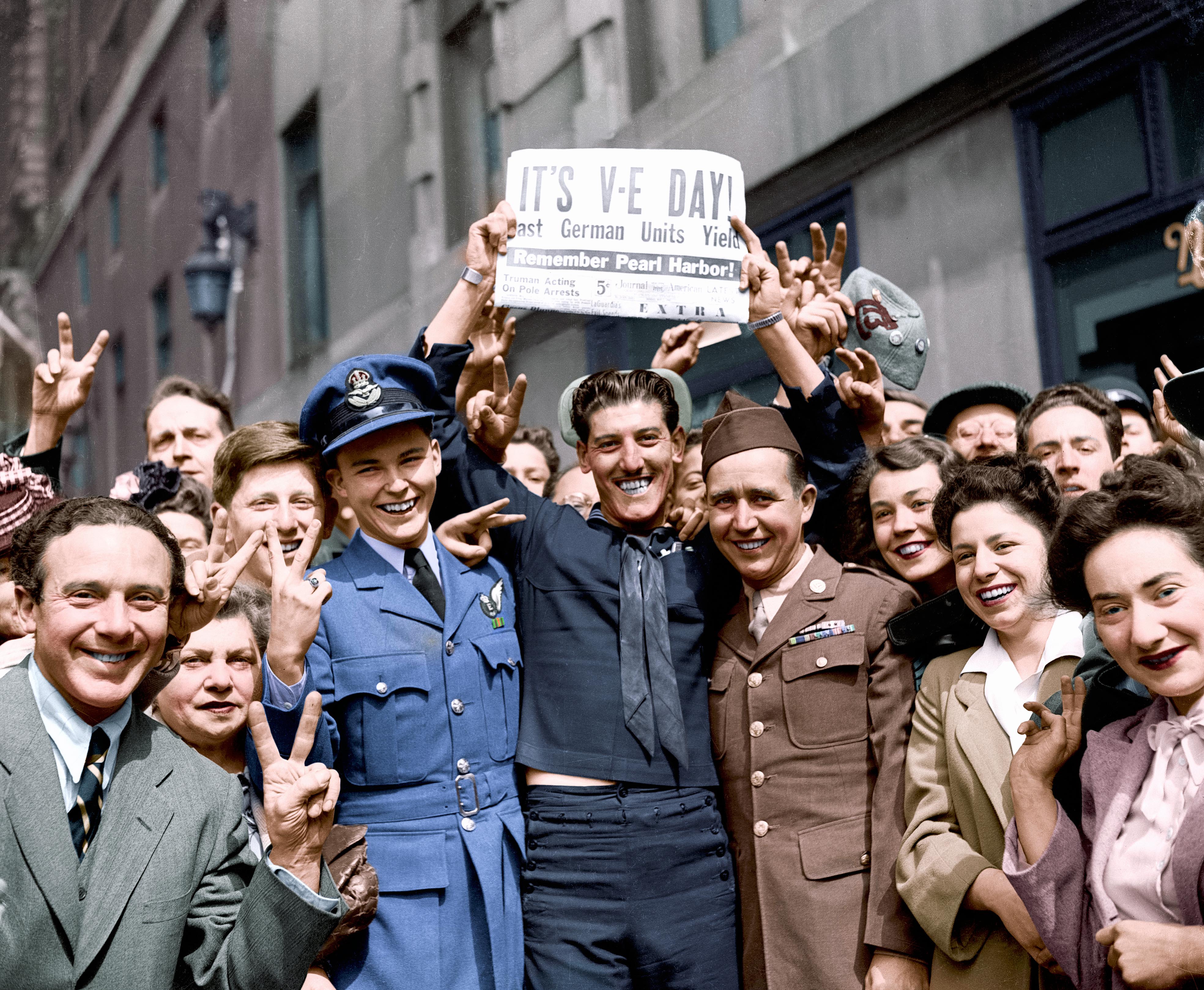