When the clouds break, the equatorial sun bears down on the crater of this steaming volcano, revealing a watery landscape where the theory of evolution began to be conceived.

Across a shallow strip of sea lies the island of Santiago, where Charles Darwin once sighted marine iguanas, the only lizard that scours the ocean for food. Finches, the product of slow generational flux, dart by.

Now, in the era of climate change, they might be no match for the whims of natural selection.

In the struggle against extinction on these islands, Darwin saw a blueprint for the origin of every species, including humans. Yet not even Darwin could have imagined what awaited the Galápagos, where the stage is set for perhaps the greatest evolutionary test yet.

As climate change warms the world's oceans, these islands are a crucible. And scientists are worried. Not only do the Galápagos sit at the intersection of three ocean currents, they are in the cross hairs of one of the world's most destructive weather patterns, El Niño, which causes rapid, extreme ocean heating across the Eastern Pacific tropics.

Research published in 2014 by more than a dozen climate scientists warned that rising ocean temperatures were making El Niño both more frequent and more intense. UNESCO, the United Nations educational and cultural agency, now warns the Galápagos Islands are one of the places most vulnerable to the effects of climate change. 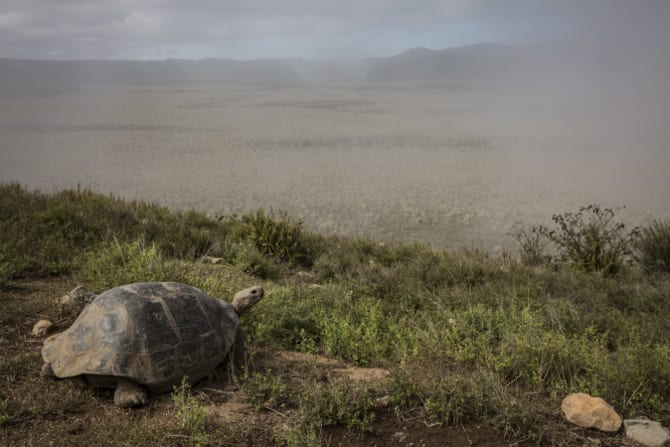 A Galápagos tortoise above the crater of the Alcedo Volcano on Isabela Island.Credit:The New York Times

To see the future of the Galápagos, look to their recent past, when one such event bore down on these islands. Warm El Niño waters blocked the rise of nutrients to the surface of the ocean, which caused widespread starvation.

Large marine iguanas died, while others shrank their skeletons to survive. Seabirds stopped laying eggs. Forests of a giant daisy tree were flattened by storms and thorny invasive bushes took over their territory. Eight of every 10 penguins died and nearly all sea lion pups perished. A fish the length of a pencil, the Galápagos damsel, was never seen again.

That was in 1982. The world's oceans have warmed at least half a degree Celsius since then.

David J. Anderson, a biologist at Wake Forest University who studies the blue-footed booby, a seabird, said the ravages of El Niño were a surprise when he began working on the islands in the 1980s.

"Now we are wondering, how frequent do these things get? El Niños have a bulldozer effect," he said. "And they are happening more and more."

Though the Galápagos lie at the heart of the geographic tropics, it's hard to guess that, standing on one of the islands, because of a vast current that flows north from southern Chile. That stream, the Humboldt Current, keeps the islands cool and rainless most of the year, unusual given that the equator crosses through the archipelago. It means the islands are subtropical in climate, a rare place where penguins and corals exist side by side.

The ocean waters start warming rapidly, heating up as much as 2 degrees within months. Storms begin to strike the islands with rain and flash floods. And, as if overnight, the Galápagos become warmer. It is the start of El Niño, Spanish for "the boy child," a reference coined by Peruvian fisherman because the changes can occur around Christmas.

"The Galápagos marine system is analogous to a roller coaster," said Jon D. Witman, a professor of biology at Brown University who studies coral ecosystems in the Galápagos, noting that the spikes of hot temperatures were followed by spells of falling temperatures, known as La Niña.

The baseline from which temperature swings occur is rising as the ocean temperatures do.

The problem with global warming, Witman said, is that the baseline from which these swings occur is rising as the ocean temperatures do. This, as the intensity and frequency of El Niño is increasing.

Before he published "Moby-Dick," Herman Melville sailed past the Galápagos and saw the black marine iguanas clinging to the rocks. They were "that strangest anomaly of outlandish nature," he wrote in a literary sketch published in the 1850s.

One particular anomaly of the marine iguanas offers a clue into what warmer Galápagos seas may have in store for them.

Martin Wikelski, an evolutionary biologist at the Max Planck Institute of Ornithology in Germany, was spending his research seasons off the coast of Genovesa Island when he noticed something strange in his calculations. When the seas warmed, the size of the iguanas started to decrease.

"Obviously an animal can't shrink, it's impossible," he said he initially thought. "But they looked odd, like frogs where the legs were too long for the body."

It turned out the iguanas were in fact becoming much smaller. 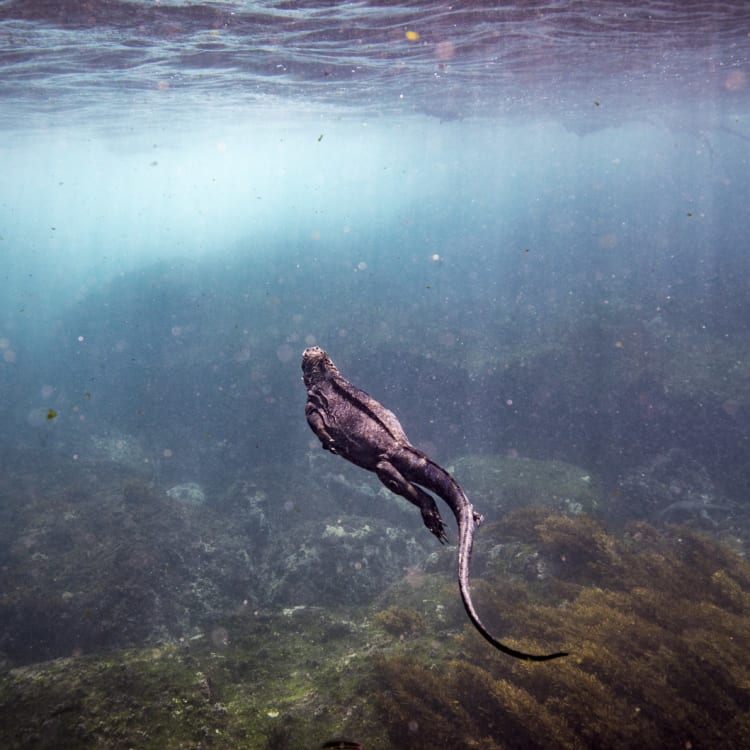 Absorbing their own skeleton

Rising ocean temperatures mean less algae, the main source of food for marine iguanas. Scientists say they believe that the reptiles may reabsorb parts of their skeleton in order to decrease their size and increase their chances of survival on a smaller diet. Stress hormones may trigger the process, but little more is understood about how the iguanas adapt. Nevertheless, the changes could be central to their survival as El Niño cycles become more frequent.

Evolution has led other animals in different directions, which could now prove fatal as ocean temperatures rise.

On a recent day on the southern shores of Isabela, the largest island in the Galápagos Archipelago, a male sea lion howled over a gaggle of pups in a tide pool. Sea lions and fur seals here have no set breeding season, so males are constantly on the defense against competitors — a costly vigilance that takes away from their time to hunt fish.

When sea temperatures rise, the sardine population around Isabela Island drops. In the 1982 El Niño, nearly every large adult male fur seal died of starvation. Most of the sea lion pups born that year died as well because parents couldn't feed their young, according to a study by Fritz Trillmich, a behavioural ecologist.

"It's like if our generation didn't have kids," said Robert Lamb, a doctoral candidate in ecology and evolutionary biology at Brown University.

Creatures have also been devising new ways to hunt. 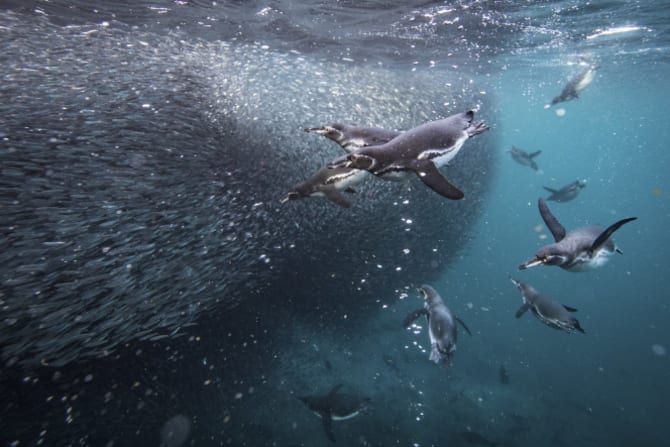 Last month, the craggy rocks in a cove off the north shore of Isabela Island were strewn with the bones of a massive fish — tuna, which scientists say they haven't seen sea lions eat before.

But just after dawn on a recent morning there, sea lions chased one large tuna into the cove, then slaughtered it in the shallows.

Whether this is simply a new behavior that emerged when populations of smaller fish grew scarce hasn't been studied, but the new diet could prove advantageous to sea lions as El Niños become more frequent.

Other animals have fewer options to change their diet.

Blue-footed boobies, birds known for their bright feet and clownish waddle, line the shores here. But at sea, these specialized fish-eaters soar gracefully above the waves before plunging into the ocean like competitive divers, scattering the clouds of fish so they can be picked off individually. 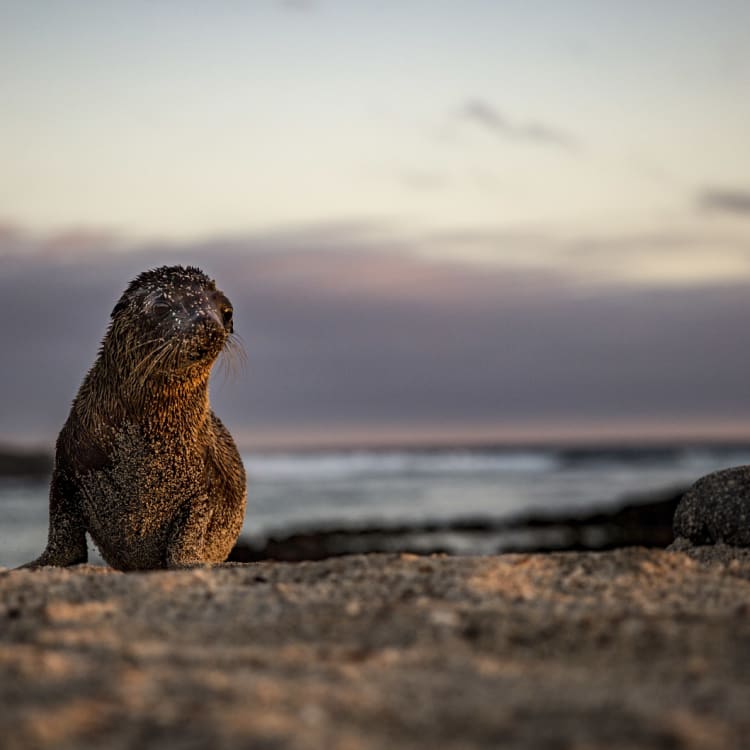 The blue-footed boobies once lived principally on sardines. But for reasons unknown, sardine populations plummeted in 1997 and the fish remain scarce, forcing the birds to eat other fish. When sea temperatures rise during El Niño, these other fish also start to disappear.

"They basically stop trying to breed," Anderson, the Wake Forest biologist, said of the boobies. He said the pattern had become more frequent in parallel with El Niños.

"One hundred years from now, I would not be surprised if the blue-footed boobies were gone" if current trends continue, Anderson said.

Similar behaviours are seen in other aquatic birds here. Galápagos penguins, which are only found on these islands, stop breeding when the water reaches 25 degrees.

Flightless cormorants starve at their nests because they cannot travel to find food elsewhere when fish populations drop near the islands. 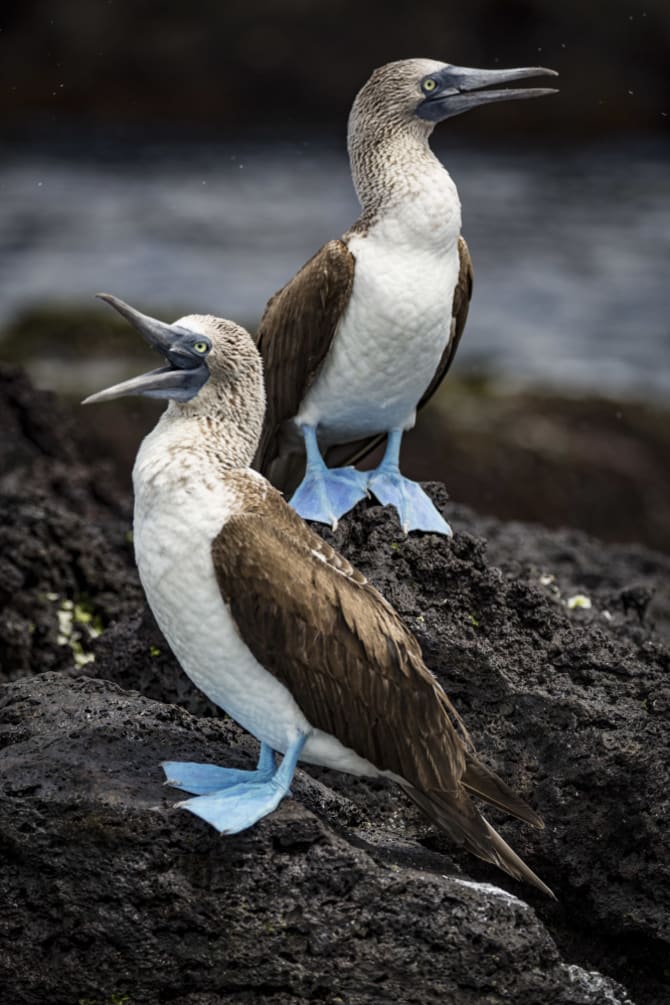 Forests of the Scalesia, a giant daisy tree that is unique to the Galápagos, were already shrinking because of clear-cutting for agriculture in the highlands. The trees are accustomed to mild weather, so the violent storms that come with extreme El Niños can flatten their forests. While destructive, storms have long been part of a natural cycle for these daisy trees, allowing a new generation to take root after the last.

With climate change, however, the process is being short-circuited. Below the Scalesia forests, the seeds of an invasive blackberry wait for the giant daisy trees to fall. The blackberry plants quickly spread, blocking the next generation of the trees.

"I'm afraid if nothing is done about the blackberry, the Scalesia forests will not recover in the long run," said Heinke Jäger, an ecologist at the Charles Darwin Foundation in the Galápagos, referring to repeated blows from El Niño.

Jäger noted that an extreme El Niño in 1997 and 1998 was thought to have coincided with the introduction of the first frog on the islands, Fowler's snouted tree frog, which may have helped them thrive. They threaten to wreak havoc on the island's insects and other invertebrates.

Another invasive species that worries scientists is the fire ant, which flourishes in wetter temperatures and eats the eggs of giant tortoises and attacks the legs and eyes of adults.

"You can see them laying one or two eggs and being attacked by the ants," said Christian Sevilla, a conservationist at the national park here. "They're just throwing off the rest of the eggs as they walk off trying to escape, with the ants still biting at their legs."

(Not without irony, Darwin was a predator of the tortoises well before the ants were. "The young tortoises make excellent soup," he wrote in 1839.)

Sevilla and other workers at the park are now considering mitigation efforts to try to protect threatened species from the more frequent El Niño events that have come with climate change. The park already has a program to breed giant tortoises in captivity.

But not all giant tortoises can be bred in a pen. Nor can many of the other creatures on these islands.

As the climate changes, so will the Galápagos. 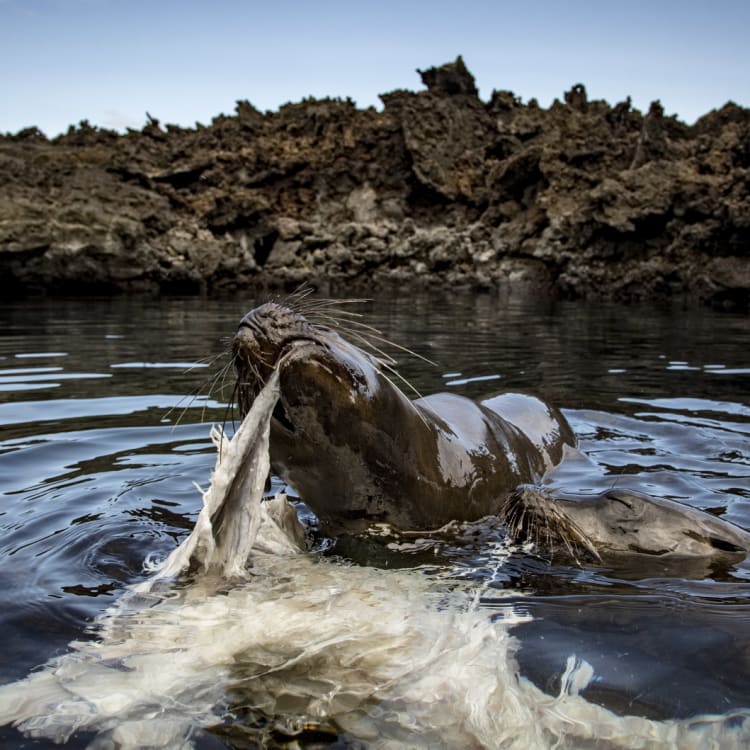